It's Not Valentine's - Let's Grab A Burger

Out of the major non-vacation holidays, St. Valentine’s Day initially came to rank lower on the likability scale. From the handing out of mini-cards to mostly strangers in elementary school (not a fun task for introverts like me) to the annual reminder it provided as a “yep, you’re still single - you suck” for many years afterward, endearment for the day proved difficult.

There was one small benefit in that I avoided the crass commercialism that this day has gained over the years, but even then that would occasionally rear its unpleasant head. Perhaps the nadir of my feelings for the day arose when, not too far after a tough breakup, I caught wind of a billboard in San Francisco's South of Market (SoMa) neighborhood. A jewelry store ad featuring a woman’s hand and a big shiny sparkly on the ring finger, the company's slogan taunted, "Have your friends live vicariously through you.”

(That might be the only time in my life I seriously considered arson as an option, but I digress...)

My feelings toward the day have mellowed some; with my spouse not being the biggest fan of the day through the years either, we've come to recognize the day in a somewhat sideways manner. We'll do things for and with each other (dine out, send flowers, participate in special couples events, etc.) but not generally on Valentine's Day itself. And in a nod to this tradition, I purposely kept this post separated from this year's festivities by a couple of weeks.

Back when I was still single, the local burger and shake joint always proved reliable as a date night option. Even now in marriage, a burger and, nowadays, an adult beverage acts as a bit of a combo date night/"I don't want to cook tonight" outing. Preston's, which was recently named the "Top Burger in Columbus" by Columbus Monthly, has risen for us as a top destination.

Much of that lies in its unusual setup - everyone has heard of the pop-up restaurant by now, but Preston's (the brainchild of Columbus culinary veterans Matthew Heaggans and Catie Randazzo) has used the concept to their advantage. Every spot they had occupied (Three Sheets and Eugene's Canteen) and currently operate from (both Woodland's locations (Tavern and Backyard) and their Seventh Son Brewing food truck slot offer up laid back atmosphere where you can pair up Preston's (named for Heaggans' grandfather) versions of familiar eats with an adult beverage and, on occasion, live music or recreational activities. 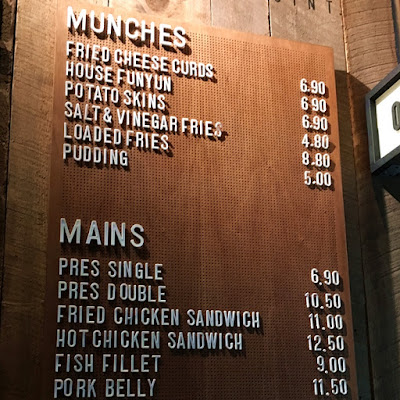 Despite the varying environments, Preston's offerings prove to be consistently worth the money. The sides start from the good (the Salt & Vinegar French Fries) and ascend from there, from the cheesy Potato Skins to the crispy Cheese Curds to what has become one of my favorite sides in the House-Made Funyuns, which are something like the best crispy blooming onion you can imagine conveniently chopped up to fit inside a fry bag.

In regard to the non-beef mains, the Fish Fillet is good, but the Chicken Sandwiches are definitely worth your consideration on any visit, The basic Fried Chicken Sandwiches have been what you want (crispy on the outside, moist and tender on the inside), while the Hot Chicken Sandwich provides a steady but easily handled heat quotient for most people. 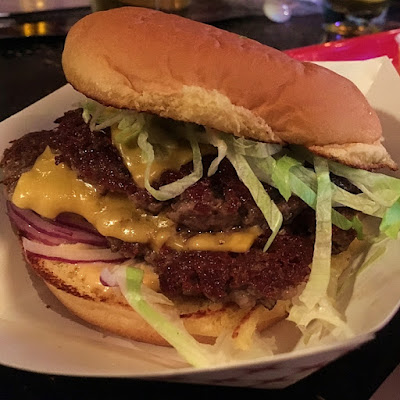 Of course, we have to talk about the burgers here. These aren't going to appeal to those who like customization or for those who are looking for the bargain bite, but in my mind, they're perfect because 1) you only have to choose single or double and 2) the Preston's base models are pretty darned great.  The single more than holds its own in terms of beef to bun ratio (of course, the double is even more magnificent), and the mix of textures and nothing fancy but quality ingredients makes them a perfect no-brainer.

Yes, pudding is listed as a side here, but I count it as a dessert, and it blows away any of our puddings we grew up with in childhood.  These from-scratch creations provide a unique distinguishing coup de grace and a sweet conclusion to any meal from this purveyor of elevated, classic eats.