In the big-wide world of sports cliches, the phrase "He/she gave 110 percent" is both overused and rather nonsensical from a mathematical standpoint. I imagine most would feel the same if the cliche used 101% instead.

However, would you look more quizzically at me if I said that it was a cow that was giving you that 101%?

Our encounter with the 101% cow conundrum came, at all places, The Pearl Restaurant. One of several Cameron Mitchell concepts which occupy the southern section of the city’s Short North neighborhood, The Pearl is touted as a seafood-oriented gastropub supplemented with fancy cocktails and a international beer list.

During our meal, my spouse was drawn to a chalkboard drawing of a cow which outlined the traditional primal butcher cuts (round, chuck, sirloin, etc.) and the corresponding percentages. After a long glance, she motioned over my shoulder. “Look behind you...does that all add up to 101%?”

I turned, spotted the cow diagram, and mentally added the numbers. “Yep, that’s 101%. Those are some pretty productive cows,” I chuckled.  Of course, I knew the diagram was wrong, but that brought me to thinking: was there such a thing as a definitive meat cut by percentage chart out there?

Well, I decided to look into that topic and came up with a few surprises.

Interestingly, a Google search reveals dozens upon dozens of meat cut charts, but very few with listed percentages. And for the most part, the butcher meat cut charts that do list percentages seem predominantly geared to two breeds, Angus and Hereford.

In some ways, the 101% cow at The Pearl proved to be a sign of the non-definitive nature of meat cut percentages, and the charts produced from one source, the American Angus Association, were prime (pun semi-intended) evidence. 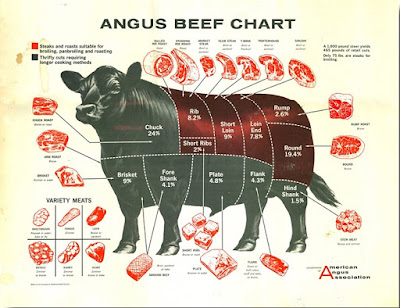 Best I can figure, the chart above was from the 1960s. Those seeking out that perfect 100 will be mightily disappointed here, as the butcher cut percentages here add up to a somewhat puzzling 96.7% 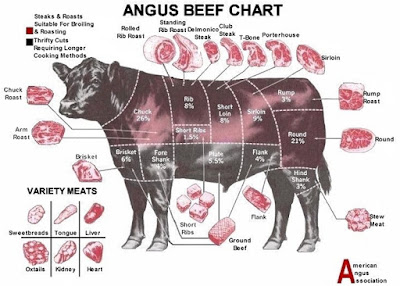 Someone must've figured out the math wasn't correct, because this chart (1980's, perhaps?) and the following chart (which can be found on poster form on the Association's website for a mere $1 plus shipping) are 99 percenters. The more recent chart crams more information into a more sleek presentation, but without going into the so-called "Variety Meats" like sweetbreads and liver. 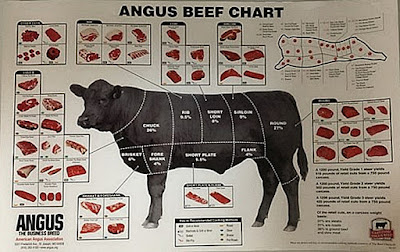 While the difficulty in reaching 100% may not seem logical, the reason why is perfectly understandable. I asked Michaela Kramer, Director of Communications and Managing Editor for the Ohio Cattlemen's Association, if there was such thing as a definitive percentage chart, and she was kind enough to respond.

Kramer essentially answered that cows, like any other animal processed for meat, are quite variable. Butcher preferences are not an issue (something I thought might be a factor), as primal cuts are set to very exacting standards, she stated, adding that "It ultimately boils down to the fact that some cattle have larger or smaller parts of their body." 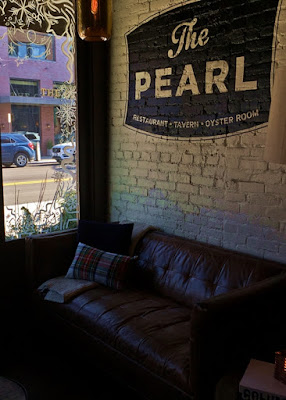 Now that we've had our cow, so to speak, what about the eatery that created this quest?  I admit the sheer number of Cameron Mitchell Restaurants concepts out there slows us down in exploring them. In a way, it creates a whole sub-layer of choice for us: now that we've decided on a CMR eatery, which one do we try this time?  However, reports of great brunches, our favorite meal by far, at his various restaurants from folks we know have given us some new enticement for exploration, and we decided to start off with The Pearl. 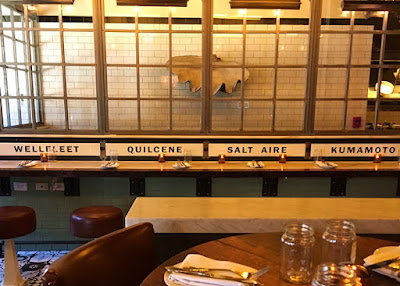 The Pearl's interior doesn't seem to have an overarching theme, but rather holds a little bit of everything, from a fancy liquor bar to the oyster bar (with names of various oysters spelled out); plenty of mirrors, windows, and chandeliers; white tile and brick; a mix of cushioned benches and leather dining chairs; and numerous barrel tops hanging from the wall. It may not be truly cohesive, but the layout does the trick for holding groups of all sizes. 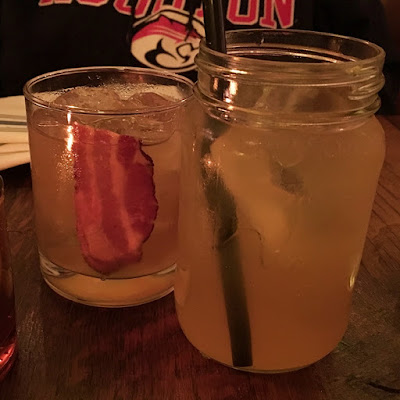 First impressions are favorable here. The N'Awlins Style Baked Oysters appeal actually stretched to me, a semi-reluctant seafood eater, and the cocktails (especially the Bourbon Bacon Beautiful, a lovely mix of Bourbon, Grapefruit Shrub, Maple Syrup and Candied Bacon) were terrific as well. 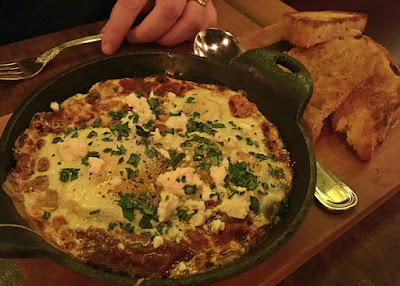 The Pearl also sports a lovely spicy Shakshuka and, on our visit, some friendly and attentive service. With a lot more on the menu to explore, we just might just be back for a second round soon, perhaps their Thursday Oyster Night...or will another CMR property might grab us first (hello, Harvey and Ed's?)

I think only the cow knows for sure...and you can bet that it'll be with 101% certainty.