When the song originally came out, I was still firmly in starving student status (the term sadly is not a mere stereotype for many) and I took the numerous food references to fries, Whoppers, and Quarter Pounders I took more at face value. It took me a little while to understand all the clever and suggestive food-related double-entendres implied in Clinton’s lyrics such as this stanza:


“Oh, he says the damndest things.
Last night when he was runnin' games.
He said "Baby, can I cut your cake?
Oh, can I have it my way?
Don't I deserve a break today?
Them buns, I like the way you bake.”” 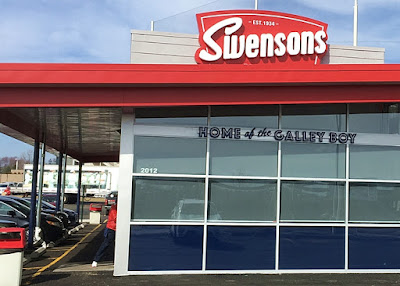 This chance catch on the airwaves came appropriately enough on another excursion into my recent and somewhat unexpected extended exploration of burgers in the area. This trip involved a revisit to Swenson's, the Akron-based chain which moved into the area last November and generated a good amount of nostalgia-fueled excitement from ex-pats in the area.

My first excursion to their Sawmill Avenue location, as detailed in this post by the CMH Gourmand, proved inconclusive: I noticed a distinct sweet note with Swensons' basic Cheeseburg (single patty with cheese) which I am told comes from the addition of brown sugar into the meat. I wasn't sure I really liked it, and upon further reflection, I realized my feelings toward the taste mirrored my feelings growing up toward Filipino Spaghetti, which also veers sweet due to its use of Banana Ketchup - I'll eat it, but its not something I truly enjoy. I figured I needed at least one more visit before coming to any firm conclusions. 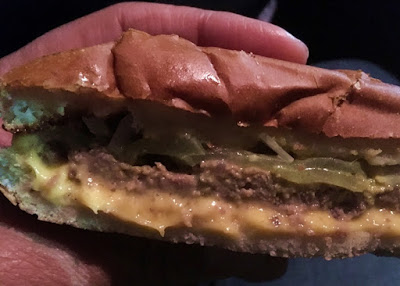 On this second visit, I dropped by their newly opened Polaris location near the new Top Golf complex, and thanks to a relative lull (just after the main lunch rush), I received a more relaxed experience than the first. To those unfamiliar with the routine, you pull your car into the surrounding parking lot and leave your headlights on until one of the staff members runs (and yes, actual running takes place with the restaurant's servers...a lot) over to take your order. I did notice that parking next to the building during the day might have delayed noticed of my headlights, as several servers ran right by my car before someone noticed.

This time, I figured the much ballyhooed double-patty Galley Boy was a must, and I must say I did like it much better than their basic single Cheeseburg: good meat-to-cheese-to-bun ratio and that special sauce. A blend of what seems to be a some mayo-based (tartar?) and BBQ sauces, the savory-sweet taste reminds me of other burgers I've downed back in the day on a regular basis with similarly styled sauces, like the McDonald's Big Mac or the burger (or fries) from In-N-Out Burger ordered Animal Style. 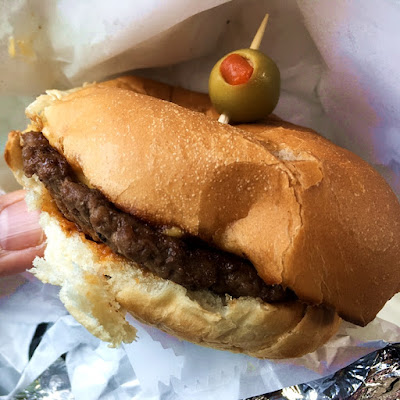 Out of the other items I've tried, the clear standout (so far) is the Potato Teezers, a beautiful combo of potatoes, jalapeno and cheese that is a much better flavor experience than the somewhat middle-of-the-road fries.  In fact, the Teezers would likely prompt my next visit to a Swensons more than the Galley Boy itself.  No complaints either from me regarding the milkshake or the fruit-based Specialties Sodas, and there seems to be more intriguing stuff worth exploring, including Fried Zucchini, Fried Bologna and Phosphates. 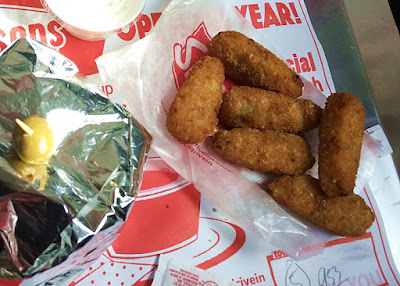 So is the Galley Boy one of the best burgers in the country, as named by numerous media sources such as Business Insider?  Who knows, but in my own mind, I'd say it's not quite up there with the gourmet burgers in the local area, similar to what Columbus Monthly detailed in their March issue with a NCAA-tournament styled bracket challenge of the best in the area. However, if you restrict the competition to the fast-food category, the Galley Boy ranks pretty high in my mind.