In many ways, this trip went farther than the hundred or so miles that it took to get to this western Ohio town. The travel was really back in time a couple dozen years or more for my spouse, when a couple dollars and a couple blocks walk could get her and her siblings a tasty cheeseburger and fries.

I imagine this was the experience for quite a few small town Ohio residents who grew up near a Clancy's Hamburgers restaurant. Started in Noblesville, Indiana in 1965 by Carl Fogelsong, Clancy's tried to bring what seemed to be the fast food concept with extra dashes of quality, community involvement and hospitality to places where the still growing national chains at the time would not venture: small town America.

Perhaps the embodiment of the restaurant's initial intentions lies in its namesake mascot, Clancy the Keystone Cop. As detailed on the restaurant's webpage, when Fogelsong spotted the caricature in an old film, he thought Clancy was a perfect representation of someone who was a quality, well-liked and friendly individual, traits he wanted his restaurants to present to customers.

At its peak around 1980, Clancy's had 31 restaurants scattered in small towns in Indiana, Kentucky, Tennessee and Ohio, including but not exclusive to towns like Bucyrus, Tipp City, Fremont, Urbana and Galion. But surely enough, those more well-known, highly publicized chains did make their way into smaller corners of the country, and places like Clancy's slowly faded away due to the competition. My spouse's hometown outlet closed its doors by the time 1990 came around, and she thought that the restaurant chain and that familiar mascot itself had also become mere memories.

But lo and behold, a simply-curious-to-see search on Facebook revealed that the keystone cop was not dead yet. The company was still alive; in fact, it had held a 50th anniversary celebration in the town where the business originated. And one lone survivor outpost, planted in the middle of western Ohio in Sidney, was within about a two hour drive of us. We made a pact that if we were out that way, we would have to stop by for a bite.

Architecturally, Clancy's doesn't look like much either inside or outside, but we discovered little details that hinted at the company's past at this lone surviving outlet. Flyers and ads for various community events and businesses were evident on the walls and the menus. Vintage overhead lamps, decked out with the restaurant's keystone cop mascot, provided the most eye-catching visual.

Also, Midwestern hospitality was evident from the staff behind the counter as well as the folks who had gathered for a meal. Seeing our obvious interest in the interior, they asked about us and proved truly interested in my spouse's bit of nostalgia for her local Clancy's outlet. These folks' pride in their Sidney-based restaurant was also quite evident.

Clancy's "Home Cooked Meals" daily specials offer a novel twist on the fast food concept. These offerings give diners the choice of all-you-can-eat options on the weekends (fish on Fridays, and fried chicken on the weekends) as well as a rotating international/manager's special option on Wednesday. The list of items offered on this day ranged from homey (creamed chicken and lasagna) to more intriguing options like regional favorite Johnny Marzetti and Native American (with a Cherokee Casserole and Fry Bread.) 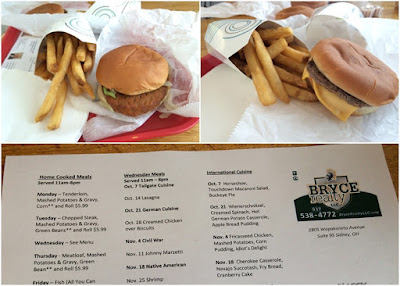 With a somewhat tight time schedule and nostalgia bringing us here in the first place, we stuck with the fast food options. My spouse couldn't NOT order her traditional cheeseburger and fries, while I was struck by some food items I would never see in California fast-food joints (sloppy joes and fried bologna sandwiches) and went with a country fried steak sandwich.  My sandwich was merely okay, but the other two items did draw some kudos. From my research, Clancy's had a reputation for good fries and these medium-cut wedges didn't disappoint, with a great golden brown color and not a limpy stick in the batch.

And the burgers were good for the fast-food variety, in the general range (for me) of a Wendy's or even an In-N-Out burger. Clancy's prices are as inexpensive as you'd find at any of the big name chain places as well.

This lone outpost of Clancy's will always be a destination for those with fond memories of the little Midwest chain that for awhile could, and the community seems to give the restaurant more than enough economic fuel to keep the cooking fires going. Clancy's may not necessarily a destination drive in and of itself, but if you're driving through the area looking for a grab-and-go fast food meal, the slight detour into town will get you just as good a meal with a side dish of Midwest history

I do hear in some circles that purposely choosing a big chain over a place like Clancy's might be considered a crime. You might even be brought up on charges, but this guy will definitely be friendly about it. 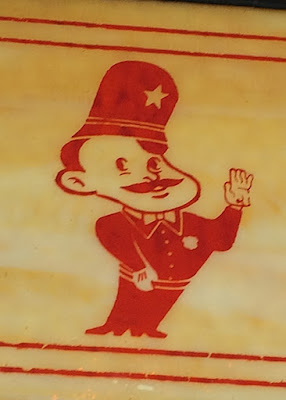