As noted in our first of this series of blog posts, my spouse and I share a mutual love of hot and spicy food. One thing we were curious about as we made more explorations into this world was a simple thought: how far was our ability to take the heat progressing?  After vague notions of seeking out some sort of food challenge, a prime opportunity dropped in our lap last year when we learned about a special event then-newcomer to the Columbus food scene, Double Comfort, had put out for Halloween.

Dubbed the "Helloween" challenge, diners who dared take it on were treated to Chef Dan Varga's spicy takes on multiple dishes. As detailed on this previous blog post, we found the food was all ultimately delicious and, save for the truly tongue-roasting etoufee, well within our tolerances that we had built up at the time. Many like us who participated in last year's challenge were successful in claiming that victor's T-shirt, and we got word from the staff that should there be a return of the challenge, the heat would most likely be amped up in the chosen dishes.

In the year since that challenge, we knew from our continued exploration of all things spicy that our capsaicin handling abilities had grown quite a bit. Would the second edition of Double Comfort's Helloween food challenge, held the day before Halloween, raise the ante as well? We were quite eager to find out. 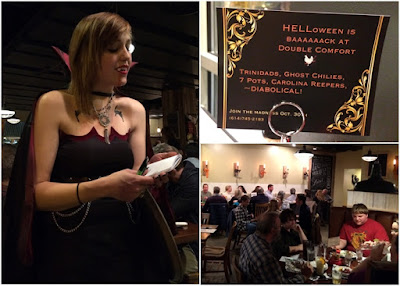 Like last year's event, Double Comfort's staff were appropriately decked out with various Halloween costumes and a festive spirit was in the air as we took our seats for our second go-around.  Event flyers sporting the names of the big boys in the chili pepper world (Trinidad, Ghost, Carolina Reapers and 7-Pots) seemed to warn (scare away?) prospective challenge-seekers that the kitchen wasn't messing around this year.

Whereas last year's menu was a full seven-course meal, challenge-takers this year were given a menu of seven small plates items (there were actually two different desserts in the pie and ice cream.) Diners could choose any three of the dishes, and those who finished them off would receive this year's version of the champion's T-shirt. However, those who failed would be subject to last year's treatment: an ice pop and a fair amount of friendly taunting from the restaurant staff. 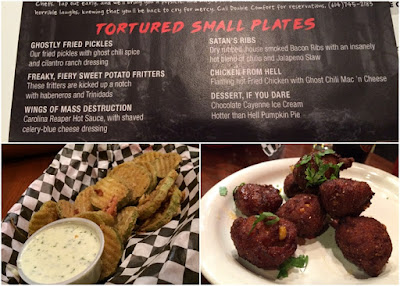 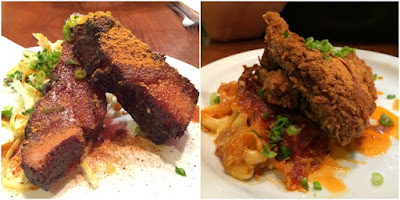 We decided to go with standard meal structure and ordered what seemed to be an appetizer, a main and a dessert. It was apparent pretty early on as my spouse dove into her Ghostly Fried Pickles (while the ranch sauce was delicious, we purposely did not use to dip except for that initial tasting to keep with the spirit of the challenge) and I my Freaky, Fiery Sweet Potato Fritters (marvelously redolent habanero and Trinidad pepper smells wafting into our noses) that, indeed, the folks at Double Comfort weren't fooling around, with a layer of sweat forming quickly on our foreheads. Still, this was well within our new tolerance levels, which gave us a chance to secretly wish these items were on their menu at least on a every-now-and-again basis.

I got a bit of a break with my main in the Satan's Ribs (Bacon Ribs coated with a super spicy rub blend) in that these marvelously delicious ribs were also quite juicy and fatty, dulling the sting just a bit. The side of Jalapeno Slaw that came with the plate also provided a limited bit of relief from the now constant burn. My spouse, on the other hand, was smacked upside her mouth big time by the combo Chicken from Hell and Mac N Cheese (crisped up in a waffle iron(!)) laced with Ghost Pepper. For the briefest of moments, my spouse had a doubt about this might be too much heat to handle, but she buckled down and got through this dish.

The desserts were no slouch in the heat department either: the Chocolate Cayenne Ice Cream was noticeably more mouth warming than last year's edition, while the Hotter Than Hell Pumpkin Pie combined spicy hot with traditional pumpkin pie spices in a very tasty package. But again, compared with the dishes before, this closing part of our meals played the role of mental victory laps at this point of our meal. 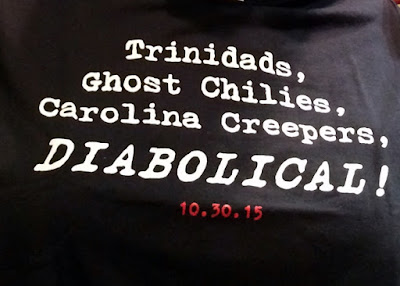 As we awaited this year's edition of the T-shirts given to challenge winners, my spouse and I got to muse on the dinner just past. Yes, we were pretty happy to how far we had progressed in terms of our ability to handle the heat, but we were especially satisfied with just how tasty all the preparations were. Upping the heat did not downgrade the delectable nature of these well-prepared dishes (we actually wouldn't mind seeing a spicier rendition of some of  Double Comfort's regular items as an option on regular day visits.) Couple the great food with this restaurant's continuing mission to fight hunger by giving proceeds to local food pantries, and you have what constitutes a gem of a restaurant.

We look forward both to our next meal at Double Comfort and (fingers crossed) a chance at a third edition of this spicy challenge next year.