It's not every day when you put in an order at a restaurant where your server looks at you with deep concern and asks, "Are you sure?"

It's even more of a rarity when you're asked to sign a waiver before the restaurant prepares your order for you. But that was the case for my spouse when she put in a recent order at Columbus' beloved Mikey's Late Night Slice.

Started in July of 2009 mainly due to an "common man" concern noted by owner Mike Sorboro (a noticeable lack of a place to buy pizza-by-the-slice within the area), Mikey's Late Night Slice has become a prominent presence on the Columbus culinary landscape, sporting three current locations, a fleet of mobile trucks and several stands within corporate and music-oriented facilities.

Starting with my first slice (bought at their "Shack" location next to the Oddfellows Bar in the Short North) I learned pretty early on that Mikey's offers up what I like to call "common man's pizza". It's not necessarily the best pie around, nor is it really gourmet in any way, but it provides a fairly inexpensive way of satisfying your pizza cravings (especially as you get into the more wee hours of the evening) and in Mikey's case, they do it with a bit of a fun, slightly irreverent edge. This is perhaps best typified by "Pizzaface", their rough-hewn logo that appears at many of their special events as well as merchandise, as well as their notoriously-named most popular dipping sauce (Mikey's has changed the name from that what-some-consider offensive term to an unpronounceable symbol, borrowing a page from the R&B artist Prince. In terms of California experiences, Mikey's reminds me of places like Blondie's in Berkeley and Emeryville's Rotten City Pizza in terms of same general vibe and same general level of pizza. 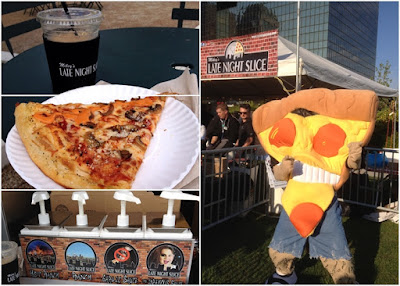 It makes total sense, of course, that a place like Mikey's would occasionally come out with a pizza with an edge to it. in the form of  "Fiery Death and Hate Sausage," available for a very limited time each year and the cause of the server's quizzical response and the reason for the signed waiver.

In collaboration with the local kings of spicy preparation in Westerville's CaJohns Fiery Foods, this pie's potent combination of ghost and scorpion peppers was enhanced by the addition of the Carolina Reaper pepper, rated as the world's hottest pepper. The pungency of this terrorizing trifecta of peppers was bludgeoningly noticeable when we pulled our slices from their paper sleeves. With two other slices of "normal" Mikey's styles also on hand, we debated as we poured a glass of beer to enjoy with our pie: do we get the heat out of the way first or last?

There really only was answer. We both grabbed our Fiery Death slices and went for the gusto.

The first bite actually wasn't bad at all, with the combo of cheese and pepper flavor rapping out a joyful dance on our taste buds. Then we took the next bite, and all hell broke loose. The omnipresent spice finally unleashed its full fury, putting our mouths aflame and releasing a ring of sweat on our brows. The capsaicin also induced an annoying but thankfully brief round of hiccups for me and gave my spouse a bit of a red mark on the skin just outside her mouth. 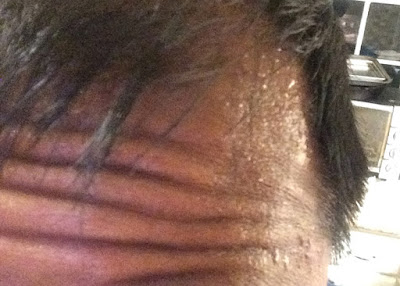 At this point, the challenge to finish the slice was as much mental as it was physical, but we both figured out pretty quickly that found that the intense spike of heat had pretty much plateaued into a constant burn that we could handle just fine. The little hunks of so-called Hate Sausage (spicy but nowhere close to what the peppers had in store) and the crust provided brief respites from the constant burn, and we proceeded to devour this igneous tasty triangle to the last crumb.

With that said, we were quite happy to get a cool down with split slices of Mikey's regular sausage and mushroom styles. As we chomped down on these, we thought about the event that this eatery would be putting on later in the week, where contestants had to down three of these fiery beasts as well as an entire Carolina Reaper pepper and pondered whether we could ever compete and complete that particularly brutal challenge.

Interestingly, we thought it was the volume of food that would be the bigger hurdle than the heat content within the food items consumed. And we realized then and there that by thinking that way, we both had become freaks of nature to an extent. Also, we knew that another slice of the Fiery Death would be on the docket for next year.