Our visit to Point Pleasant, WV, showed us to our pleasing surprise that this little river town has a bit more to offer outside of the Mothman mythos. One was already written about in regard to the U.S. Navy Poster Museum; this final post on our trip talks about the history behind Tu-Endie-Wei State Park.

Ohio itself has plenty of history to go around; while our earlier visit to The Serpent Mound detailed this state's original inhabitants, our visit to the Zoar Historical Village detailed one of one of the more unique groups of European settlers to set up their home within this state's borders.

In between these two visits, we dropped into Marietta, the first permanent settlement northwest of the Ohio River, to check out where the locals drop by for some locally brewed beer and pub grub.

Tu-Endie-Wei State Park:  The point of land that holds this state park would be a in-the-area destination if only for the pretty view, combining multiple river bridges as well as the confluence of the Kanawha and Ohio Rivers. But the impossible to miss monument centered on this property gives the visitor the hint that there's something much more to this piece of land other than pretty views and nicely manicured greenery.

Although unintended, our visit to the park came on a rather momentous day: roughly 240 years prior, what some historians have dubbed the first battle of the American Revolution took place upon this Point Pleasant site on October 10, 1774. At that time, clashes with Indians were commonplace, and seen by American forces as possibly detrimental in a possible conflict with mother country Britain, especially if Britain were to ally with the natives.

After signing a peace treaty with Iroquois Nation and Delaware tribes, Governor of Virginia Lord Dunmore meant to quell rebellious Shawnee and Mingo tribe factions to the south, led by Chief Cornstalk, by teaming up with appointed commander of Virginia's militia, Andrew Lewis. Suffice it to say, the battle was brutal (300 deaths spread between both forces) but successful for the colonists, as it led to a treaty where Shawnee and Mingo forces would remain neutral in any American-British encounter. 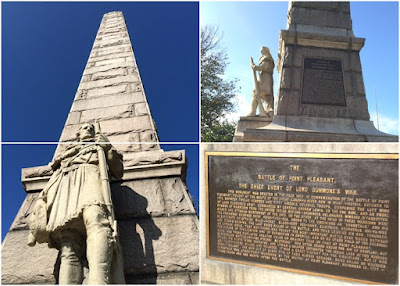 Also located at the park is Mansion House, the oldest hewn log house in the area (and originally run as a tavern) that has been preserved and turned into a museum run by the local chapter of the Daughters of the American Revolution. Open from May to October, it does not look like much from the outside and actually looks on the smallish side, but the visitor will find more artifacts, bits of local history and other items of interest stuffed within this building's multi-leveled interior than one might think. 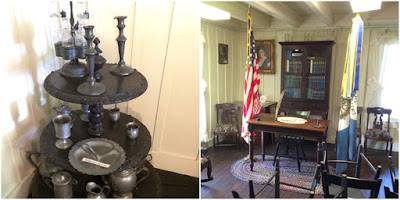 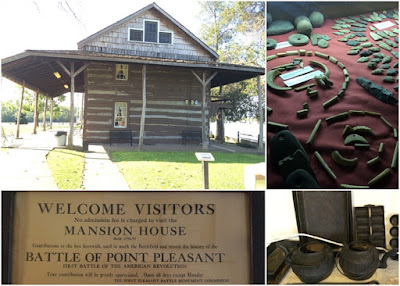 On a side note, if you do get the chance to walk along the river on the Point Pleasant side, be sure floodwall murals (similar murals reside in other towns further down river such as Portsmouth, OH and Covington, KY), which provide a artistic rendition of life along the river as well as important historical events in the area, including those which took place at Tu-Endie-Wie. 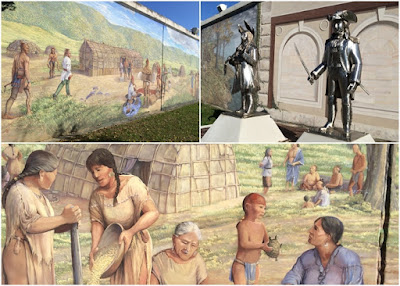 Zoar Historic Village: Located just northeast of Dover and New Philadelphia, Ohio, the historic settlement of Zoar provides an incredibly detailed look at a unique group of settlers who made their communal way of living work for over over 80 years.

Formed by a group of 200 separatists escaping religious persecution in their home country of Germany, Zoar Village was founded in 1817 with a communal arrangement. In something of a Cliff Notes version of basic operations, Zoar society members were assigned tasks to keep the village functioning, and all goods produced were shared equally among all in the village. All needed goods and wares were produced among community members, and with the generally rough living conditions and the need to conserve limited resources, a philosophy or reusing goods and building things to last was commonplace among members of the village.

We had previously visited a similar town/state park in the Gold Country of California in the historic town of Columbia, and there are definitely some similarities to these two places. However, we found that Zoar had a more down-to-earth quality to it, and the exhibits that were opened (coming during off-peak tourist season and a Sunday meant that some exhibits were closed) gave us a more detailed look at what the hardship the original settlers must've felt versus the cleaned-up view of mining life that Columbia presented.

After checking in at the Zoar Store/Visitors Center (here you can purchase souvenirs as well pay admission for a wristband that will let you into all the open exhibits), we walked two blocks to the Town Hall, one of the last buildings built by the society and currently home for two museums. After a helpful video introduction to the Zoar society, we wandered through this two story building and saw a rather extensive collection of tools and personal artifacts gathered from the original Zoar settlers. 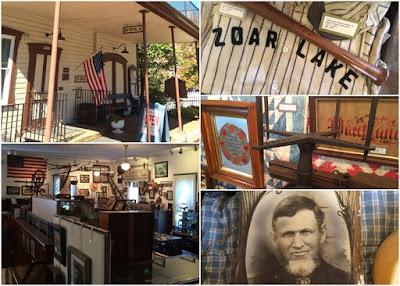 The well-preserved nature of many of these items is a tribute to the Separatists' mantra of taking care of their belongings and creating them to last. This building also holds items for the Ohio & Erie Canal Museum: Zoar and Bolivar were on the southern stretches of this transportation pathway from the Lake Erie region, proving especially vital for the first couple or three decades for Zoar settlers (the canal's importance declined starting in the 1850s when the railroad became the dominant mode of transport of goods and people throughout the country.)

Next, we ventured to the Number One house (residential houses were originally numbered to help make the distribution of goods an easier process) where society founder Joseph Bimeler and Zoar trustees once resided. Within this solidly built house (this can be visually seen quite well when touring the basement) visitors can get not only an idea about the functional quarters the settlers lived with, but also the laundry areas as well as the magazine, where goods were stored and available to distribution to all village residents. One also can further sample the great craftsmanship within various collective members, with perhaps the most striking being in the organ handcrafted by Peter Bimeler, great grandson of Joseph and the miller for Zoar during its later years of existence. 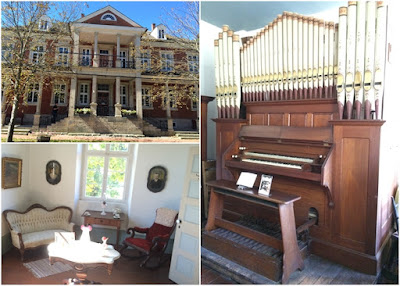 Other exhibits, original Zoar houses turned into private residences (while they are not open to the public, visitors are free to walk through the streets and view these 19th-century era homes) and businesses (including a tavern and a bed and breakfast) are scattered throughout the village. However, the undeniable centerpiece of the village remains the Zoar Garden. Anchored in the center by a large spruce tree (meant to symbolize everlasting life), the garden acted then as both a spiritual haven (the numerous paths emerging from the center are representative of paths to Heaven) and a source of sustenance to village members (the grounds then and still grow vegetables and fruits.)  On this sunlit day, we couldn't help wander through this area and feel at peace with life in general, free to ponder what the original settlers were thinking dozens of years ago as they did the same. 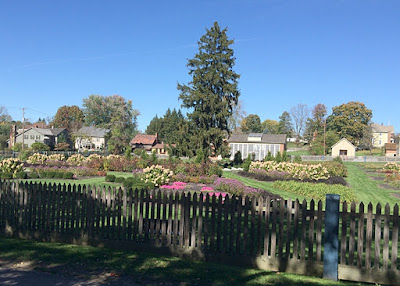 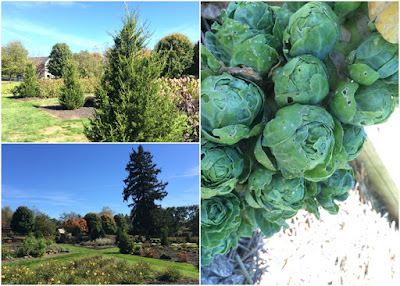 While the original Zoar collective officially disbanded in 1898, the pride in what those original members were able to accomplish in their nearly 70 years of existence remains strong today with their descendants. We felt fortunate to experience that while chatting with one of the village's current docents, who had set up shop inside Number One House to guide that day's visitors. We learned that she was descended from the Bimelers of Zoar, and her obvious excitement in being able to relate her family's history to visitors like us in the actual living quarters of her ancestors was palpable and heartwarming. This conversation, above all, may have been the most satisfying moment of our exploration of this unique bit of Ohio history. 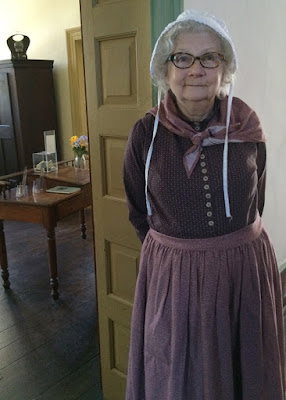 
Marietta Brewing Company - The town of Marietta, sporting 14,000 people at the last Census count and holding the distinction of the first American settlement northwest of the Ohio River, can be a bit confusing for first-time travelers coming north on Ohio State Route 7. After having West Virginia on the other side of the river for pretty much the entire route, I found myself a bit confused having to cross a bridge to get into Marietta, as I thought that we must surely be going into Ohio's neighboring state. Later, I was able to figure out that we were actually crossing the Muskingum River, and that Marietta was firmly ensconced in Buckeye country.

The building in which Marietta Brewing Company (MBC) resides may, for those familiar with the Columbus brewery scene, remind them of the building where Barley's Brewing Company resides. Its downtown location, high ceilings and brick-lined interior are obvious points of reference; the large murals inside MBC are also reminiscent of the posters which line Barley's walls. This brewery, which is the second incarnation of the concept (the first iteration of the brewing company was in 1866 on a site a couple blocks from the current establishment), was like Barley's similarly founded in the 1990s, some five years after Barley's was established in 1992. 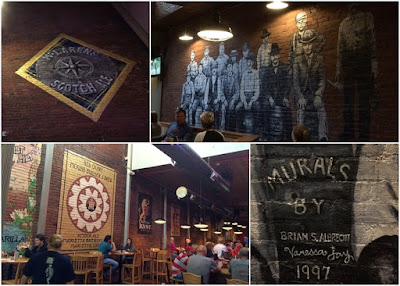 Food-wise, MBC treads similar pub grub ground as places like Barley's or Mad Anthony Brewing in Fort Wayne, with a slightly more limited selection but with a pizza option. Obviously, this is a first impression based on just one meal (for my spouse, the steak salad and for me, a veggie pizza) but I'd put the food level somewhere ahead of Mad Anthony's and just slightly behind places like Barley's or even Smokehouse Brewing in Columbus, but more or less in that same class of brewpub grub that's perfectly pleasing with a brew or two. 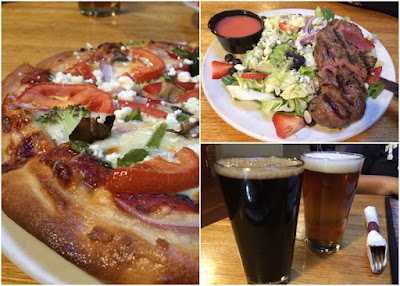 Marietta also hones its focus in terms of its own brews, rotating its own seasonal around a base of five year-round beers. While the selection may be smaller than most, the beers we had were all at least better-than-average.The standout brew for us was their Esther's Raspberry Wheat, which compares quite favorably to the Razz Wheat that Jackie O's in Athens, Ohio produces. Another solid brew was their Stanleyville Milk Stout, a smooth and creamy rendition with a pleasant maltiness and coffee notes. If MBC's own in-house brews don't appeal to you, a wide variety of mainly bottled craft brews from all parts of Ohio (on our visit, at least two choices from the Cincinnati, Cleveland and Columbus areas were available) from all parts of Ohio and outside the state are available for your drinking pleasure.