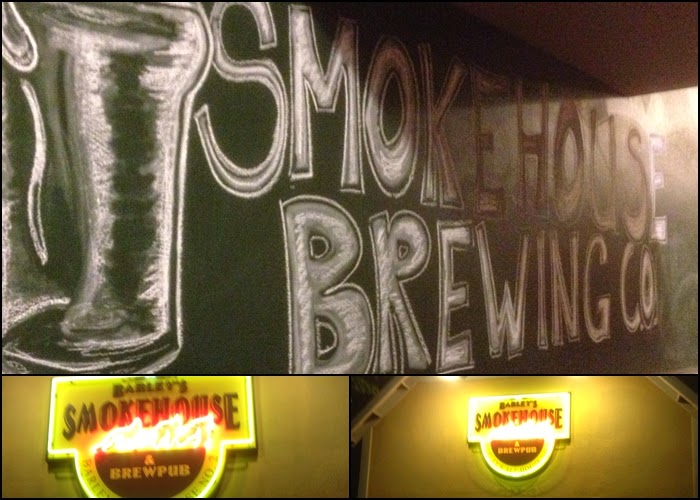 My first introduction to Columbus-area brewing lay with what I ended up naming "The Barleys." Whether it was the Ale House next to the North Market or the Smokehouse on Dublin Road, I soon realized I could get some good pub-style food or barbecue depending on the location, and a great brew at either destination.

I came to learn that I wasn't alone in the struggle to distinguish between the two locations. However, the owner of Smokehouse Brewing Lenny Kolada (who had sold his stake in the original Barley's) made that a lot easier for many by removing the Barley's name from the Dublin Road eatery. Indeed, on this first visit for me since the re-branding (my spouse had a previous visit under her belt), the only thing I saw that referenced the Barley's name was the sign above the main entrance.

However, people should not be worried about the beer; these still remain the same great Barley's beers that have always been served here as originally conceived by head brewer Angelo Signorino. On this visit, my spouse was slightly disappointed that the Centennial IPA had just tapped out, but the pint of Pale Ale she ordered in its stead proved to be satisfying on its own.

The interior of the restaurant itself pretty much maintains the same overall feel and atmosphere I had experienced in the past, with perhaps maybe some minor enhancements and rearranging of the seating.

Smokehouse's traditional and quite enjoyable barbecue items from their days under the Barley's banner still provide the main focus for the restaurant-goer, but we've found their new menu items a definite asset. On this later-night, last-minute decision visit, I didn't arrive here with a completely empty stomach and decided to take the opportunity to sample the appetizer menu. Their Spent Grain Pretzel Bites ($8), a collaboration with a local favorite of mine Dan The Baker, were of a softer, lighter texture than the typical bar-style snack. The spent grain lent them a very unique flavor profile that went well with both the accompanying dipping sauces as well as the bowl of White Chicken Chili ($5) I had ordered to supplement my meal.

On a previous visit, my spouse had already sampled and very much enjoyed their Smoked Pork Barbacoa Three Way (pork shank on Asian slaw, pork belly in BBQ sauce and pulled pork on lettuce) from their original new menu. Alas, this item was not on the new Fall/Winter menu, but that allowed her to order their Smoked Bahn Mi ($11) on this trip. This is by no means any thing close to traditional, but Smokehouse's take on this Vietnamese standard offered a blend of tastes that made this another winning offering for both of us. Also, while this sandwich is not über-gigantic like, say, a Thurmanator Burger from Thurman's Cafe, the size of this tasty Smokehouse sandwich makes it a fork-and-knife affair for all but the widest mouths.