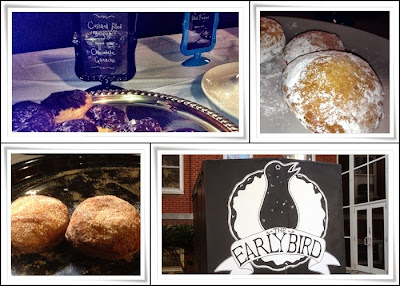 There are plenty of food trucks around the Columbus Metro that will freshly whip up some wonderful savory treats; occasionally, you'll find one that has an item or two that will satisfy the sugar hound in you.

So why not a food trailer that focuses mainly on freshly baked up sweet goodness paired up with a cup of quality java to boot?

After graduating with a baking and pastry degree from college, owner Libby Vicha started up Four and Twenty Blackbird Bake Shop in 2013, selling her baked goods (mainly cupcakes, but also assorted breads and pies) at various markets around the area, including the Pearl Market (which is where I first encountered her goods.) The Early Bird is her latest venture, and my spouse and I were fortunate enough to have attended the soft opening a couple weeks back.

Vicha proved to be an engaging host, saying that had come into the baking world as cupcakes were booming but her interests in that world waned as the cupcake craze leveled off. She had always been a fan of the beignets offered by New Orleans' famed Cafe Du Monde and thought a menu based around them and other items reflective of her pastry background was more in line with her true passions. Additionally, she noted that the Early Bird was a joint venture with the property owner (the Indianola Church of Christ) that would further both the church's and her own food and beverage operations.

On this evening, her sample beignet offerings on this evening were all quite delicious, with the chocolate ganache being our favorite. Coffee was from and will be brewed with the beans of Short North roasters One Line Coffee, a definite plus in our books. Perhaps our most anticipated item on her proposed menu for us is the hand pies, which Vicha said would be freshly created and come with a variety of fruit filling options.

At the time of the soft opening, Vicha said several final permit checks and inspections were still outstanding, and operating hours are still a work in progress. While the final operating hours will most likely be finalized depending on how business goes, we are happy to say that based on their social feeds, The Early Bird has passed their final inspections, and diners can drop by for their official opening on Tuesday, November 18th at from 7 AM - 11 AM.

Update: Despite a few small hurdles related to weather and some balky equipment, Vicha has opened up her food cart and appears to be receiving some solid foot traffic despite some unfavorable weather. My spouse and I dropped by a few days after opening to sample a couple of her freshly-made beignets and cups of One Line Coffee. Both of our beignets (custard and strawberry-filled) were quite tasty and made for a good start on a very cold (even for) November morning. 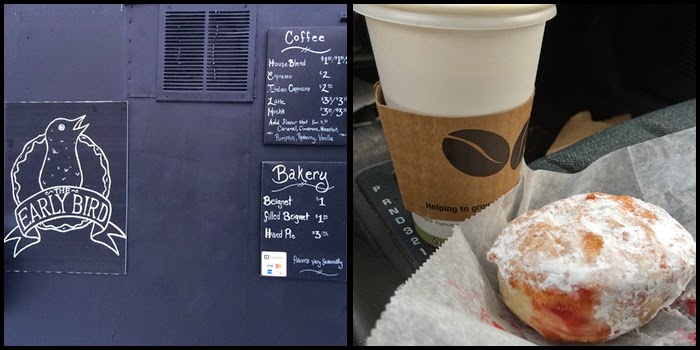