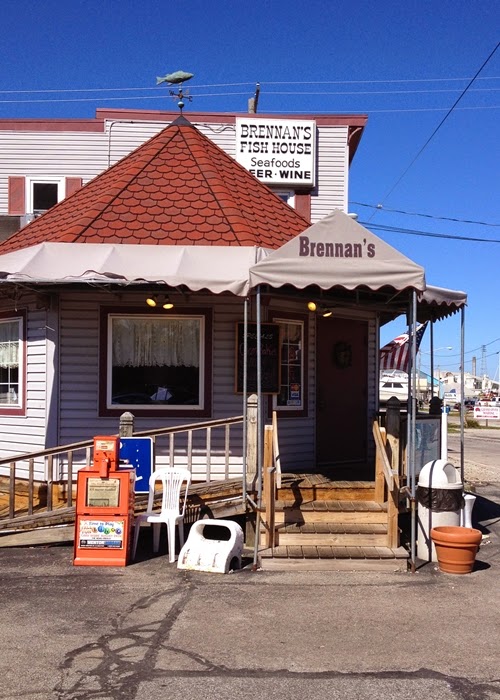 Other than our trip to Niagara Falls, my parents were very non-committal on places they wanted to visit, leaving the role of tour guide to my spouse and I. In terms of food, one definite was a Filipino restaurant, which we were happy to find in Niagara Falls itself (our experience at Manila Flavours can be found at this prior post.)

The second definite food item was a taste of Great Lakes fish, specifically walleye and perch. While my parents have had plenty of experience with ocean fish and crustaceans, fresh water lake fish has never been much of an option on their dining plates. On our way back from Buffalo, we sussed out Brennan's Fish House, perched out near the Lake Erie shoreline in the village of Grand River.

When one drives into Grand River to the area where Brennan's is located, one can sense that this is a place that had once seen both better and worse days. Adjacent to Brennan's, a fairly large lot with a closed restaurant and parking lot as well as a funky barn building with an advertisement for Mail Pouch Chew Tobacco are quite prominent. Off in the distance, one can trace the Grand River, the town's namesake, downstream to where its mouth meets Lake Erie. On this sunny day, we spotted a boat slowly chugging down the river, further enhancing the lazy vibe of this fairly hidden area of Ohio.

The interior of Brennan's has more than its share of nautical and fish-related paraphernalia scattered about the premises; we ended up sitting next to a mini-display devoted to the most ubiquitous of Great Lakes shipping events: the wreck of the Edmund Fitzgerald, the ore freighter which sank in a violent storm November of 1975 on Lake Superior.

The menu is also pretty typical of a seafood place, with plenty of options to get your fish and seafood jones taken care of. While most items (generally in the $10 to $20 range) are aimed for some big-time chowing down, a few items are sold in portion-sizes geared toward smaller appetites in either sandwich form or sans the bread and are friendlier to the budget. Other non-seafood basics like steak and chicken (listed on the menu as "Shore Picks") and a unique item or two (e.g. Frog Legs) are also available for restaurant-goers.

Basically, we all ordered some form of the fried perch and walleye geared toward smaller appetites. Still, the portions we received still pretty substantial. Our food was prepared well, the fish was quite tasty, and we all felt quite stuffed and satisfied by the end of our lunch here. In addition, our servers couldn't be more friendly, assisting us with our menu choices and checking up on us to make sure things were going well.

Brennan's is a bit of a detour off the main Interstate between Buffalo and Cleveland (lying halfway between Ashtabula and Cleveland), but would not be too out of the way for those cruising closer to the shore (on State Route 2 or U.S. Highway 20) or for those who might have a little time to drop by an area with that has seen a nearly 180-year boom-and-bust history. If you and the residents of Grand River are lucky, you might be visiting during what the owners of the restaurant describe on the history section of their website as a "new era of growth and prosperity."