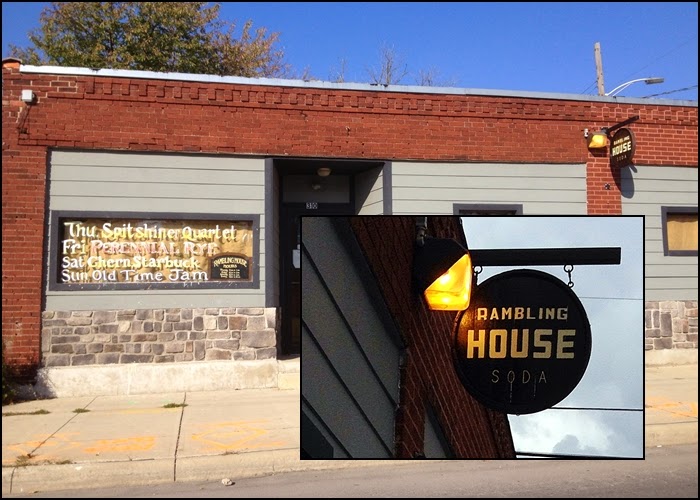 As the weather turns toward the colder, the value of a warm and cozy house is amplified even further. One house that I've found fits that bill to a tee for its unique blend of music, atmosphere and craft-brewed beverages is the Rambling House, located on the border of Clintonville and Old North Columbus (an interesting debate on the neighborhood Rambling House lies in can be found here.)


The Rambling House is truly a family affair, led by owners and husband and wife John and Jennifer Lynch. John Lynch has explained in previous media interviews that in traditional Irish culture, the "rambling house" was a regularly organized event that provided local residents of a town or region province a venue for entertainment in various forms, including song and music. This particular Rambling House provides that venue in the form of its Old Time Jam on Sundays, when musicians gather and jam away on their instruments, as well as regularly scheduled shows focused mainly on bluegrass and folk music. Coupled with a reasonable cover charge, my spouse and I have found ourselves enjoying some wonderfully talented local and regional artists on several occasions.

The interior of Rambling House provides a relaxed and comfortable venue for musicians and audience members alike. The seating and stage area reminds me personally of a large living room: curtains and lamps bracket the musicians' stage, with communal long tables and casually spaced individual seating areas available for visitors. Music-oriented and/or local-referenced art prints are scattered on the walls throughout. Empty bulk coffee shipping bags cover windows and adds a tinge of garage to the overall environment. On certain busier nights, food trucks have been parked nearby to provide a food option for customers.

The bar area lies toward the back of the space. In a world dominated by big brands like Coca-Cola and Pepsi, soda pop is not typically associated with the words "craft brewed" by the general populace. However, Rambling House has carved out a niche in this metro area with their flavorful home-crafted renditions of this staple. Initially, Lynch had intended to open up a craft beer brewery, but the substantial start-up costs made them turn towards their sodas instead. Favorable reception of their sodas at places like the downtown Pearl Market and Comfest as well as the picking up of several local places to carry their product (the current places that carry their soda can be found on their website) led to the development of their space to its current status.

Unlike their corporate brethren, Rambling House's creations are meant to be savored, whether in their pure form or in a cocktail (Rambling House has a select menu of cocktails available mixed with a variety of locally produced spirits.) Typically, four flavors are on the menu - ginger beer, Columbus cola and sarsaparilla are almost always offered along with a seasonal flavor, For those who can't make it to their music venue, Rambling House Soda is served on tap and available in growlers at a select number of Columbus restaurants and markets. In addition, a nod to Lynch's craft beer background and support of the local scene is reflected in their bottle and draft list, which features a select number of offerings from Ohio-based brewers.

Rambling House Soda is currently in the midst of trying to expand their operations to add more bottling and keg-filling capacity and is holding a Kickstarter campaign which ends in mid-December to get this accomplished. Regardless of this campaign's success (and I personally hope it does succeed), Rambling House Soda is truly a unique gem both in the music and culinary scene of Columbus. It's not really surprising that Lynch and this otherwise unassuming hangout has gotten attention from folks outside of Columbus like The Daily Meal. While that is indeed nice recognition, I'm sure Lynch would be quite satisfied with many happy customers filling their ears with wonderful music and filling their growlers with his sublime soda pop.