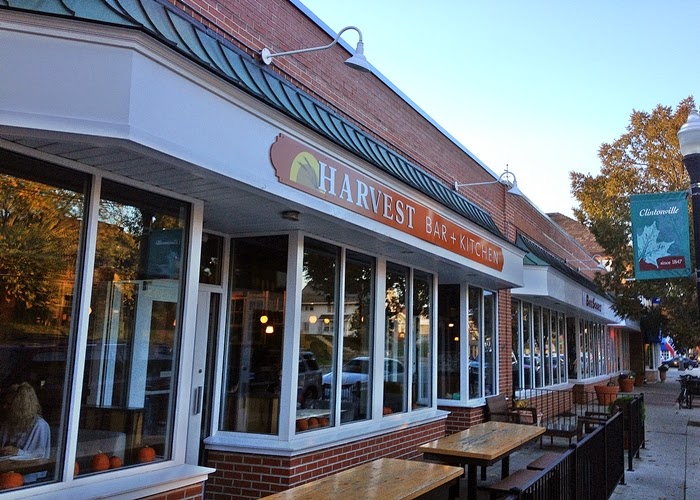 Our first encounter with Harvest Pizzeria was back in 2012 on our first ever Columbus Food Adventures tour of German Village. Back then, the business was just in its infancy, and their basic Margherita pizza slices we sampled showed us they had potential to stick around for a while.

Sure enough, Harvest has made good on that initial notion: after opening up both their Curio Bar as well as The Sycamore Cafe (now known simply as The Sycamore) in the same neighborhood, they have branched out to the north and opened up Harvest Bar & Kitchen (HBK) in Clintonville in the former space occupied by Mozart's Cafe.

Inside, HBK's space has been smartly attired in a rustic/country modern motif, in a somewhat similar vein of the recently visited Double Comfort. The interior layout hasn't changed too much from told Mozart's space save maybe for the seating. Seating is available at HBK's bar area, which takes over where Mozart's pastry displays and coffee area once stood. While the heated patio seating area to the side of the building has been retained, additional seating space has been fenced off up front for the warmer seasons. And unlike Mozart's more intimate and private table positioning, HBK's inside seating arrangement lends a more communal feel to diners, as if you were sharing one single table with your fellow restaurant-goers.

Harvest has brought their pizzas ($11 - $14; gluten-free crusts are available for $3 extra) with them to their Clintonville location, and they remain among the best in the metro area. Their Spicy Yuma (a scrumptious blend of local gouda cheese, chorizo, jalapeño, corn, red pepper and chipotle-laced sauce) will always be on the consideration list on future visits. Meanwhile, their Mushroom pie, with havarti and gouda cheeses topped with a mix of Athens County mushrooms, was also a solidly tasty pie. If you're not enamored of any of their preset combinations, a build-your-own pizza option is also available starting at $11 with a mix of no-charge and extra-charge items.

In addition, Harvest Bar and Kitchen has added a slew of additional menu items that, based on our first experiences, show a similar long-term promise that we experienced with their pizza a couple years ago. Harvest's Veggie Burger ($13) has joined my rotation of favorites in this metro area. Their HBK's version sports a seemingly kitchen-sink mix of ingredients including quinoa, wild rice, cashews, house-made giardiniera and Shagbark black beans; each bite provides a slightly different but quite enjoyable blend of flavors around an overall satiating unique taste profile.

On the other hand, HBK's weekend Fried Chicken special ($15) might be as decadent as their Veggie Burger is healthy. This combo is not only large in quantity (consisting of fried chicken breasts drizzled with spicy honey sauce and Benton's Country Ham served on buttermilk biscuits and remoulade, with a side of hush puppies and honey butter), but also large in taste as well. We had plenty leftover to bring with us back home to be enjoyed again the next day.

HBK does not skimp on the beverage choices. Beer in draft, canned and bottled forms is available, as well as a select cocktail menu and a fairly extensive wine selection.

Harvest's Neapolitan-style pizzas are definitely reason enough in itself for visiting either of their locations. However, it is their tasty expanded menu at their Clintonville location that make their Bar and Kitchen concept both a winning prospect for almost any diner and a definite on our personal rotation of regular favorites.