Worthy of the Gold: Weinkeller (Niagara Falls, ON) 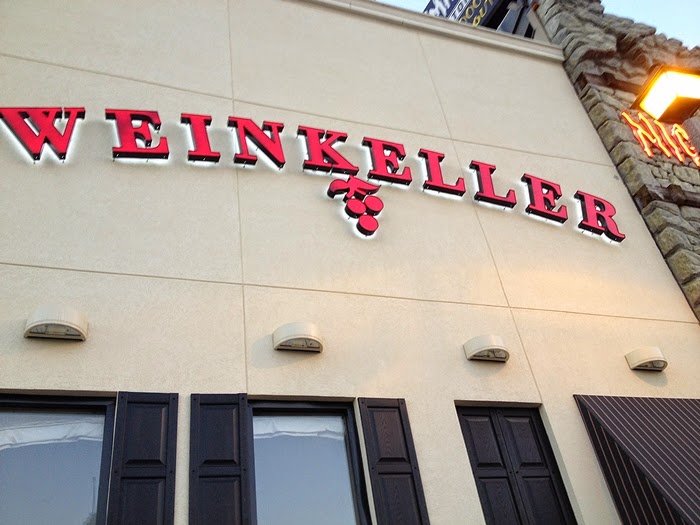 Golden anniversary celebrations should be special affairs no matter what the circumstances. The spouse and I had been fully expecting to make the trip out to California to celebrate my parents' 50th year of matrimony this year, but due to another set of circumstances (thankfully nothing of dire nature) the big shindig just wasn't going to happen there this year.

Thus, we wanted to give them a slightly early celebration during their time out here with a special meal, and Weinkeller in Niagara Falls provided the venue.

While one can order a la carte at Weinkeller, their driving concept revolves around a prix fixe menu where customization is a prime hallmark. A customer can tailor their prix fixe menu in quite a few ways that are not apparent via a quick glance through of their website. The main choice lies in receiving a 3-course dinner for $35 or 5 course dinner for $45.

Despite the relatively select menu, diners will realize there are even more choices beyond the prix fixe/a la carte level, starting with the drinking water. Similar to their wine, Weinkeller produces their own in-house carbonated and purified water and allows diners to choose between the two. Other customization lies in their meat and fish entree offerings; these can be prepared by the chef in a multitude of ways (for example, their Pacific Salmon platter can be had blackened, cooked on a cedar plank, poached with seasonal hollandaise sauce, or grilled with herb butter.) Also, if you choose the five-course prix fixe menu, you can include their house-produced wines as one of the courses.

We all basically opted for the three-course prix fixe option and opted to get extra beverages on the side. Our first courses covered the gamut: from the Caesar Salad (a solid version) to my Chicken Parcels (an interesting creation consisting of ravioli-sized chicken-pot-pie pies accompanied by a tart cherry aioli.)  My dad utilized the customization aspect early on and went with two appetizers (instead of appetizer/dessert,) ending up with two good ones in a Smoked Salmon Bisque soup (finished with crème fraiche and fried capers) and the Beef Carpaccio (thin strips of seared tenderloin mixed with a Panzanella salad.) The other winning appetizer was one of the two Herbed Mussels variations offered. These mussels, which were panned in herbs & white wine and topped with parmesan-coated truffle fries, was chosen by my mom and was found quite a winning dish by all.

We all branched off on our own as well in regard to the entrees; while there was not a standout dish that wowed everyone, everyone was satisfied by their choices. Each dish chosen, from the Pacific Salmon with seasonal hollandaise sauce, to the grilled New York Steak with béarnaise, the Vegetarian Linguine (arugula pesto pasta with roasted garlic cloves, oven dried cherry tomatoes and crumbled goats cheese) and the Clams Casino (fettuccine tossed with smoked bacon, roasted red peppers, garlic bread crumbs and clams) were all solidly-delicious renditions of these dishes.

Desserts followed a similar pattern to the entrees: while none of the desserts reached that elite eye-popping "best thing I've ever had" level, everything ranked as quite good and provided a solid nightcap to everyone's prix fixe dinners. We were all close to being full, but we had no reason not to finish off their Dark Chocolate Cheesecake, Red Wine Chocolate Wontons (with raspberry dipping sauce) and Creme Brulee sweet treats.

My spouse and I also sampled their house-made wines; based on our entrees, we stuck with their white wines. Based on personal tastes, we thought we would enjoy the Riesling or Gewurztraminer varietals, but in the end the Pinot Blanc carried the day in our own personal "best of" designation with a nicely dry punch with a nicely noticeable tinge of peach.

Weinkeller (which translates from German into "Wine Cellar") sports an appropriately dark, cellar-like atmosphere. The interior is quite stylish: the splashes of modern artwork on the walls and smartly-engaged lighting making this a good choice for a romantic dinner or a relaxing group dinner with friends or family. The service was also top-notch: Weinkeller's high level of menu customization can prove confusing to the diner, and our server was well-versed and patient in explaining our options to us.

In the end, Weinkeller proved to be well worth the money for our golden anniversary dinner with my parents. If you are looking for something both a little bit more special and novel in regard to menu customization when dining on the Canadian side of Niagara Falls, Weinkeller fits the bill perfectly and should be high on your consideration list.