As noted in our last post, we got a good night's rest at the Historic Lowe Hotel the night before a probable meeting with the dreaded Mothman in the sleepy river town of Point Pleasant WV. This, coupled with the great weather on this early fall weekend, led to the feeling of being optimally prepared for any encounters, both fantastic and frightening (on both) as we trekked out for the day. 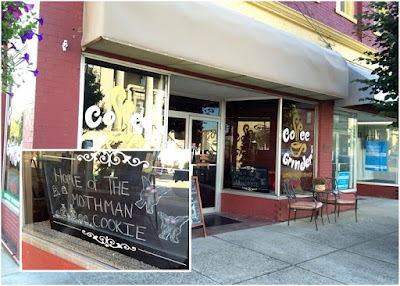 We started the day with a cup of coffee and a little snack from the Coffee Grinder, which resided catty-corner from the hotel. Like many small town coffee shops, the service was down-home friendly, the space cute and inviting, the baked goods decent, and the coffee a bit on the timid side in brew-strength. But even in these comfortable surroundings, the Mothman's presence permeated the surroundings in the form of their Mothman Brew coffee beans and the house special Mothman Cookie. These latter was too adorable to resist, and we bagged one for a Mothman-loving relative of ours before we left. 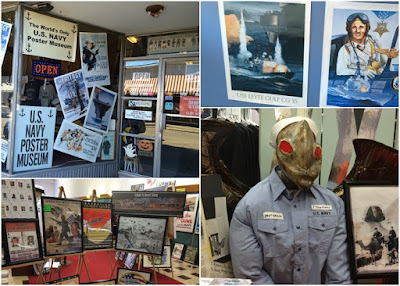 Before our main encounter, we thought a good warmup session before would do us a world of good, and the (proclaimed World's Only) U.S. Navy Poster Museum, residing in the Lowe Hotel building just a half-block or so north of the hotel's main entrance, gave us the perfect venue for this. Sporting a uniformed version of the Mothman, this museum's main focus resides in the slightly overgrown hobby of the owner Kelly McCorry Fields.

Fields, a Navy Veteran whose enthusiasm for both her collection and anyone who drops by and visits is unmistakable, has amassed a substantial collection over the years of both original and reprint U.S. Navy-related posters spanning from around World War I to present day conflicts like the Gulf War. Being a Navy brat growing up, my interest was even more acute than my spouse's (who also has family members with military ties) so the posters were a natural draw for me. However, with the modest $3 admission per person, almost anyone can get enjoyment out of this unique collection, from the historical aspects, the artwork within the posters themselves, and just letting Kelly herself give you the inside details behind the museum and the prints within.

Feeling ship-shape and ready for anything after our Naval encounter, we raised anchor and set sail to go to eye-to-eye with the Mothman. 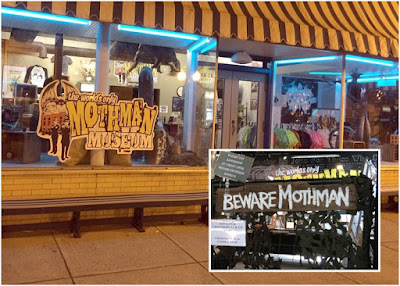 The (proclaimed World's Only) Mothman Museum pretty much lies across the street from the Historic Lowe Hotel (if you haven't figured it out by now, downtown Point Pleasant isn't terribly large.) Aside a plethora of Mothman-related souvenirs in front-of-the-house gift shop (including another Mothman Blend coffee from Silver Bridge, a familiar presence at numerous Columbus-area farmers markets and locally-oriented grocery stores), the museum, curated by Jeff Wamsley, holds a wide collection of media-tidbits, topic-specific exhibits, and other memorabilia that cover the whole history of the Mothman saga to date. 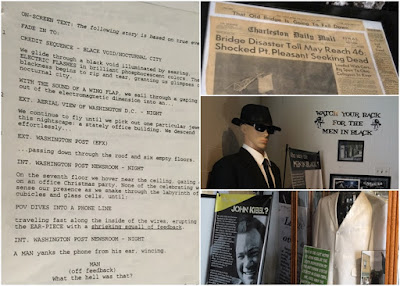 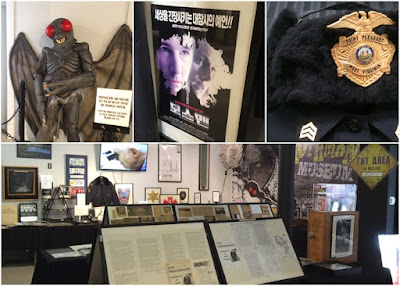 While the museum section of the building would not be considered large-sized by anybody, there is a lot more to see, hear and riffle through than one might think. The mental smorgasbord this provides for Mothman aficionados goes without saying, but the plethora of materials available also helps those unfamiliar or barely familiar with the folklore to soak up the story to their heart's content. Similar to the video presentation given at the Serpent Mound, we found the video presentation in the museum section of the building quite helpful to us Mothman amateurs.

And while there is a certain seriousness to the overall presentation (the true believers in the Mothman wouldn't have it any other way), the right dose of kitsch and fun is added to the mix as exampled by carnival cutouts, comic book style graphics, and a little touch of Hollywood (I mean, who wouldn't want to see the blanket that brushed both Richard Gere and Debra Messing in the 2002 Hollywood-produced movie up close and personal?) Another quite modest admission fee ($3 bucks again) makes the museum in our minds a well worthwhile visit for most. 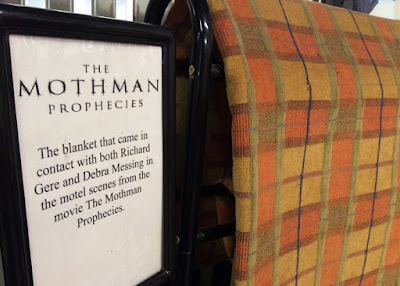 The Mothman Museum also acts as a centerpiece of the annual Mothman Festival, which had its 14th annual shindig in this town on its traditional third Saturday of September.  Perhaps the other big centerpiece for the festival, located again not too far away (in this case, on a street island lying halfway between the museum and the previously mentioned Coffee Grinder), lies in the rather formidable-looking Mothman statue.

This metallic menace, designed by artist Bob Roach, was dedicated in the second year of the festival and attracts many casual passers-by to this town. The statue is apparently quite sturdy, based on the antics of what looked to be high-school aged teens we saw out the window during our previous night's hotel stay. The construct seemed quite capable of holding some fairly hefty individuals in its arms for some unique photo opportunities.  We're both surmising even the Mothman itself would never have prophesied that it would be so photogenic fifty years after its first sighting. 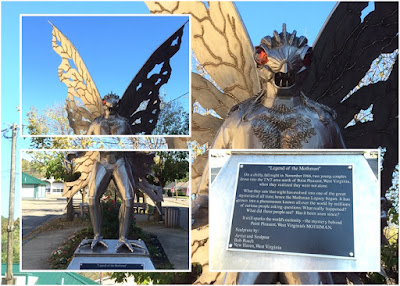