Maybe it was because I wasn't specifically looking for the combination of arts and crafts and gift stores during my time in California, but coming to Columbus has really opened up my eyes to this mashup. Perhaps its because I find many people who find pride in this state as well in addition to their city or neighborhood, and aren't afraid to show it. This mashup is evident in all forms here and has lots of purveyors, which you can find from local farmers markets, numerous local festival and event vendors, and even brick-and-mortar operations. But regardless of the venue, it almost seems like a mandatory-stop-and-take-a-look when the spouse and I have a few spare minutes to see what the folks of Wholly Craft! are currently offering.

Started in 2005 by Olivera Bratich, the success of this craft-oriented store mirrors the general upswing in the homemade crafts marketplace (the online king of homemade crafts, Etsy, was also established during the same year.) From its modest beginnings, this Clintonville-based business has now become a community staple, featuring the works of over 300 plus craftspeople, of which almost a third are locally-based as noted in this recent article in The Metropreneur.

For me and the spouse, visiting the brick-and-mortar shop or their booths at local events like Comfest, Moonlight Market and Oktoberfest is a visual and mental treat. The combination of solid craftsmanship, creative flair, and a good mix of local Columbus and Ohio references in the store's product selection personally makes me wish I had more time to dabble on my inventive side, or possessed a little more cash to actually buy more of the artistic and often playful items available in the store.

For knitters like my spouse, Wholly Craft! also features a space dubbed The Supply Closet, which offers (and accepts) recycled craft supplies and hosts workshops and private events. In addition, Bratich launched Homemade Ohio, a catalog company that will target Ohio-oriented goods that are actually produced within the Buckeye State. As Bratich herself noted in this Columbus Alive article,
“Nothing drives me crazier than seeing something with an ‘Ohio’ on it, and then the tag says ‘Made in China,’” 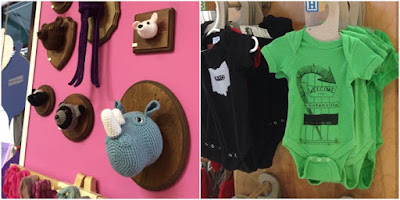 I suspect that Bratich herself and the folks at Wholly Craft! would never have suspected that they would be in this for a decade, nor reach their cornerstone status in the Clintonville community as they have (and deservedly so.) Perhaps that's why their planned 10th Anniversary Party, scheduled for roughly one week from the writing of this post, feels just a little more special than that of most other businesses, even in the eye of this relative newcomer to the area. I suspect the celebration will be much like any visit my spouse and I have made to Wholly Craft! in the past: visually appealing, full of creativity, and just plain fun.

The Tenth Anniversary party for Wholly Craft! is scheduled for Saturday, October 17th, from 7 PM - 10 PM. Further details on the celebration can be found on the event page of their Facebook account.