Appalachian Adventures (Pt. 1): All About The Serpentine Fire

This year's house purchase put a bit of a damper over our usual typically epic summer travels; cash that would've went for that journey was instead put toward some needed house maintenance. We even shelved our traditional wedding anniversary excursion, though we did make up for that with an excellent dining experience at Delaware's Veritas Tavern.  So by the time this month rolled around, the itch to get out and explore had hit us fully and we decided to take on relatively short-distance (our last trip saw us road tripping all the way to Colorado) but still eagerly anticipated sojourn through the mostly unexplored (for us) Appalachian region of Ohio and West Virginia.

We started with what has become our traditional jumping off point for journeys southward: the tasty pastries at one of our longtime favorites (German Village's Kolache Republic). Of course, the kolaches proved to be as appetizing as ever; they even gave us a chocolate kolache on the house as we packed our Cafe Brioso coffees for the road trip ahead.

Since making time was not really an issue on this excursion, we traveled with the intent of taking as many back roads as possible. Thus, after a few miles on I-71, we hopped onto US 62 for a slow leisurely journey toward southern portions of the state. As it turned out, the lunch hour more or less coincided with our arrival into the quaint town of Hillsboro, the county seat of Highland County. We figured this would be a perfect time to grab some eats as well as discover what this town of roughly 6,600 people had to offer its visitors. 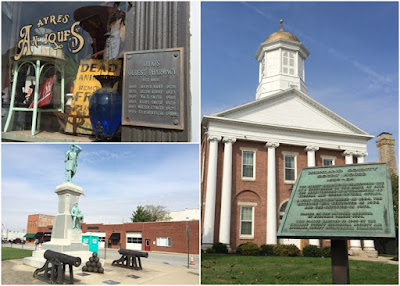 Birthplace of famed cartoonist Milton Caniff (Terry and the Pirates and Steve Canyon), Hillsboro offered up a relatively simple but fairly elegant Federal-styled county courthouse, an assortment of various monuments, and a small collection of antique shops (including one housed in what is touted as "Ohio's Oldest Pharmacy") to keep us entertained. A first of two tips by a local shopkeeper led us on an unexpected side trip to the old Times Gazette building in the south of downtown, where a gentleman specializing in estate sales had his collection of recent finds for viewing and purchasing had his building open for visitors. Numerous intriguing items (many from the state of Kentucky) caught our eyes, including a beautiful oak box containing both family and media-printed recipes. Alas, the oak box and its trove of possible culinary treasures was a bit too much for our pocketbooks, but we wouldn't mind dropping by this store again (they are open to the public the first non-holiday weekend of each month) if we pass through the area again. 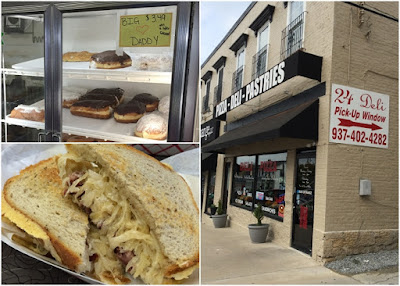 Hillsboro will probably never be known for haute cuisine, but the shopkeeper's second tip satisfied our lunch cravings quite nicely with a more down to earth option. 24 Exchange Deli, Pizza and Sweet Shoppe, part of a unique combo of consignment shop and eatery, offers the visitor a plethora of movie and TV related wall posters (a general sci-fi theme was evident, as well as the works of the peerless Don Knotts), Amish pastries (including some monstrously-sized donuts and long johns) and a deli and pizza menu of the usual suspects. Our sandwiches were perfectly tasty, with plenty of kraut and thick-sliced corned beef on my Reuben and a satisfying Chicken Salad for my spouse. 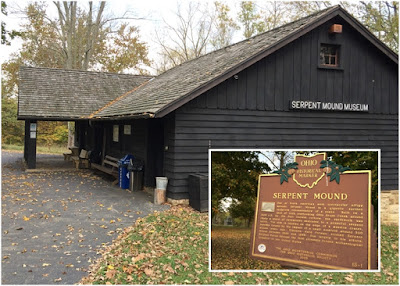 Our featured destination this afternoon was The Serpent Mound, lying in the northern reaches of Ohio's Adams County and touted to be the world's largest serpent-shaped effigy in the world. We started at the museum, where we got a taste of the mound's purpose, the conflicting debate about the mound's origins (attributed at varying times to the Adena, Hopewell and Fort Ancient Native American cultures), as well as other historical artifacts and information about the indigenous cultures who resided in these parts of Ohio. The short video documentary in the main display area proved to be quite helpful in spelling this out and is worth a view if you ever visit.

Another feature touched on at the museum became quite evident as we walked out and surveyed the ancient structure itself: its head, tail and even the peak of its curves are lined up perfectly with numerous astronomical events such as the summer solstice. At ground level, wooden signs scattered around the pathway which circumnavigates the perimeter of the mound allowed us to match up sections of the structure with specific events.

An elevated metal viewing platform (not recommended for acrophobic individuals) gave us a much better perspective of the mound's elegant curves and overall structure from above. There were few visitors at the site on this off-season day of early autumn, leaving us by our lonesome at this heightened vista, with only the sounds of nature to serenade us as we peered down at this serpentine construct and pondered hows and whys that went into its being. 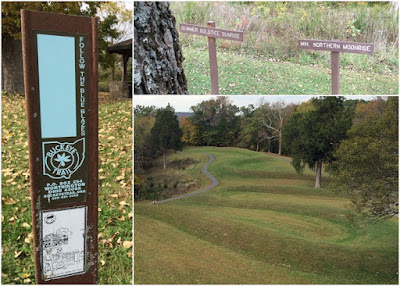 We encountered other scattered Adena-attributed effigy mounds on site; while they were nowhere near as picturesque as their serpentine cousin, it reinforced in our minds how important this area of Ohio's was to past indigenous cultures. Also, a Buckeye Trail sign reminded us that one need not travel out-of-state to a mountain range to take on a hiking challenge through picturesque countrysides.