Like to our trip to see the revival of Pippin earlier this year in Cleveland, our visit to see Norah Jones at her tour stop at Columbus' Palace Theatre was definitely more about my spouse's music tastes, as she was owner of Jones' first three albums. Not that I personally didn't like Jones' style of music: I myself own a copy and got a lot of enjoyment out of her debut album Come Away With Me, which has sold more than 26 million copies to this date and earned her numerous initial accolades. But as is the case with my ADD-riddled musical tastes, I figured I had pegged what I would get from Jones' future albums when her similarly-styled 2004 follow up Feels Like Home came on the scene.

Friday's concert showed both I had missed out on quite a bit of development by Ms. Jones on the musical front in the decade since I more or less stopped paying attention. Even my spouse, the more fervent fan but was slightly behind on Jones' album collection, found a surprise here and there that elevated the artist more in her mind 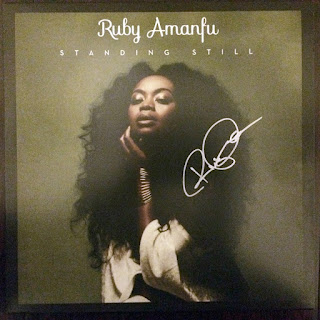 The night opened up with a beguiling artist in her own right in Ruby Amanfu, a Nashville-based singer with roots in the African nation of Ghana. Known more recently for her collaboration singing with country duo Sam and Ruby and guest duet appearances (most famously with the White Stripes' Jack White on "Love Interruption", a song off his first solo album Blunderbuss), she recently has returned solo artist status with her recently-released mostly-covers album "Standing Still". Her unique takes on lesser-known songs by a diverse cadre of artists (including Kanye West, Wilco and Brandi Carlisle) has received critical praise from media outlets like Rolling Stone magazine and NPR.

Even with all her performance history, Amanfu seemed a bit nervous and even giddy during her initial hello to the still gathering sold out crowd; perhaps she was realizing that she was performing as a solo artist for the first time in quite awhile. This feeling may have been amplified initially a bit by the setting, as her lone accompaniment on the stage (aside from the already set-up instrumentation for Norah Jones and her band) lay in the form of fellow Nashville-based musician, guitarist Johnny Duke.

However, Duke's subtle and supportive fretwork was perfect in combo with Amanfu's voice; her on-stage swaying and distinctive vocal phrasings on "Where You Going" (original by Jimmy Dale Gilmore) and "Anyone Who Knows What Love Is (Will Understand)" (an Irma Thomas cover), slowly mesmerized the gathering crowd's full attention to the stage. As her set moved forward, Amanfu continually expressed her thanks to Jones, her musical colleagues and the gathered audience all the way to her performance's finale.

Her next song, the plaintive "Cathedrals" from Jump, Little Children, was a crowd-pleaser and highlight for both of us. We found ourselves were mouthing lyrics like "In the cathedrals of New York and Rome/There is a feeling that you should just go home/And spend a lifetime finding out just/Where that is" without ever hearing the song before. Amanfu closed out her set with a few more songs off her album, including the Bob Dylan cover "Not Dark Yet" (a song she has previously performed live and is also included on the new LP) and a lovely closing number featuring her lone original song off her latest album, the pleadingly romantic "I Tried" 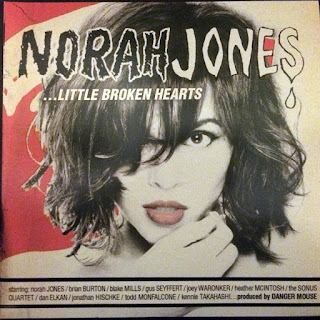 Of course, the vast majority of people here were here to see Ms. Jones, and she and the members of her very capable backing band The Candles received a rousing ovation as they took the stage. The first quartet of songs ("What Am I To You?", "Out On The Road", "I've Got To See You Again" and "Turn Me On") started laying out my preconceptions about what I would be seeing or hearing on stage on their head. Jones was confident, relaxed and playful from the start, and she and her band produced a smooth and strong sound that easily carried through the Palace Theatre, despite her jokes with audience members that were so "way up high" and "being in the dark" beyond the first few rows.

For their part, Columbus audience members clearly let Jones know they were out there and enjoying every note, and she rode this energy quite well. Whatever remnants remained of my preconceptions were pretty much ground into a fine dust when Jones seamlessly moved to an acoustic guitar for "Black", her contribution to producer Danger Mouse's 2011 spaghetti-western inspired album Rome.

Unbeknownst to both of us, Jones had branched out quite a bit from her piano- and jazz-oriented beginnings, delving into country and rock through numerous collaborations and side projects. She moved over to the electric keyboard for "It's Gonna' Be" and "Chasing Pirates" from her fourth album The Fall, then donned the electric guitar for the rollicking rockabilly-ish  "Don't Know What It Means" off her country side project Puss N Boots (along with Sasha Dobson and Catherine Popper.) While Jones was the obvious focus, she allowed various band mates to show off their skills in the spotlight at various points of the concert.

After two more energetic renditions of "Lonestar" and "Stuck", Jones took the stage solo behind her piano for two from her debut album ("Painter Song" and the ubiquitous "Don't Know Why") mixed with two off her last 2012 Danger Mouse-produced album (the title track "Little Broken Hearts" and "Miriam".) "Painter Song" was something of a jaunty revelation compared to the more lazy and produced original, while "Miriam" was perhaps my spouse's favorite for the night, revealing a darker side of the singer we had no idea existed.

Jones and her band mates finished out their main set in fine style, including the New Orleans-styled bluesy romp "Sinkin' Soon" from the 2007 album "Not Too Late" and a cover of Neil Young's "Don't Be Denied", in which opening act Ruby Amanfu added her fine vocals (Amanfu and Jones exchanged a loving hug with each other after the song's end.)  After Jones donned the guitar once more "Come Away With Me" for the closing number, the audience's enthusiastic applause brought back a stripped-down edition of the band out for an encore.

After two songs off of her second album Feels Like Home ("Sunrise" and "Creepin' In", Jones and her band launched into an unintended bit of irony, ending the night her tandem contribution (along with bluegrass/Americana artist Gillian Welch) to the 2011"The Lost Notebooks of Hank Williams", the playfully wistful "How Many Times Have You Broken My Heart." In reality, perhaps the only "broken" heart on this particular night belonged not to any audience member but rather The Candles' own bass player Josh Lattanzi, whom Jones had forgotten to introduce on stage and good-naturedly admitted to doing through her social media feeds after the show.