Our next stage of our trip had us wary with anticipation, as we crossed over the Ohio River from Gallipolis to the West Virginia side to stay the night in the sleepy river town of Point Pleasant. What happened almost fifty years ago just north of this hamlet has led to a unique folklore (or folk-fact, depending on your point of view) that intertwines a famed bridge collapse, numerous media headlines, a book and a subsequent Hollywood movie, and, in an odd twist, provided a dose of lifeblood that keeps Point Pleasant from fading into the proverbial dustbin of history.

This piece of American folklore is none other than The Mothman, a winged humanoid creature first encountered by two young couples on a dusty road in the old West Virginia Ordnance Works (referred to locals as the "TNT Area") in November of 1966.  For the next year, reports in the local and mainstream media of various sightings, encounters, and other paranormal activity, along with claimed threats by mysterious "men in black" to prevent people from revealing their experiences, were commonplace.

The culmination of these events was the tragic collapse of the Silver Bridge, roughly one year after the initial sighting of the creature. Those who give credence in the existence of the Mothman believe the Mothman was either responsible for or was sent to try to warn the residents of the area of the bridge disaster, since no sightings of the creature were reported in the aftermath.

In many ways, the anticipation for us was not so much a belief or non-belief in the Mothman legend, but rather learning about the legend itself, as much an unexplored entity as the lands we were traveling through this weekend. We had heard about the book by John Keel titled The Mothman Prophecies and the subsequent movie starring Richard Gere based on the book, but otherwise we had little knowledge of the backstory.

We did want to pay homage of sorts to the disaster which had much a far more wide-ranging effect than its role in the Mothman mythos. The original Silver Bridge, built in 1928 roughly one mile north of where its existing replacement lies, was a unique construct in its silver aluminum-based paint and its highly efficient but low-redundancy single high-strength eye-bar suspension construction. The state-built memorials, also located where the original bridge set down in each state, give simple summaries of the disaster, reference the 46 lives lost in the incident, and are both in need of a little upkeep, especially on the West Virginia side. The effect of the December 1967 bridge collapse had a profound effect; as noted on the West Virginia historical marker, the disaster led to the passage of Federal Government bridge inspection standards the following year. 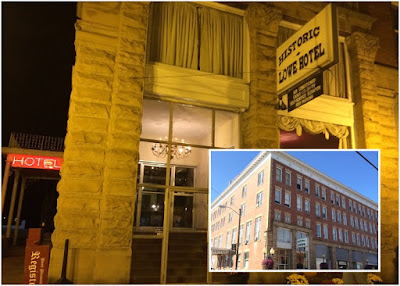 Our stay that night would be at a hotel that has its own encounters with the supernatural. The 114-year-old Historic Lowe Hotel, seated in downtown Point Pleasant, started off as the Spencer Hotel and was a popular stopover port in the days when Ohio riverboat traffic was far more prevalent. According to the blog site Theresa's Haunted History of the Tri-State, the Lowe may be the home to at least five different ghosts.

On one of the few nods to modern convenience, the hotel's website states that the current owners Ruth and Rush Finley, owners of the hotel since 1990, are "upgrading the building and adding
their personal touch to the business." We suspect upgrading will be mostly about maintenance, and there were places in our room that could've used it, from a vent panel propped against the wall, a toilet that didn't quite flush right, and a stray screw in a window sill that either needed tightening or removal. Even the walls were thin, a perfect environment for ghostly moans and laughter to seep throughout the building.

But similar to the Queen Anne Hotel, an old Victorian (supposedly haunted as well) smack dab in the middle of San Francisco that my spouse and I had the pleasure of staying in a few years back, the little quirks and flaws we found were far outweighed by the bygone era touches, such as the period furniture and equipment (the hotel's old telephone switchboard was a neat find in the lobby,) the skeleton keys used to open and lock your room door, or what appeared to be vintage wall sconces. 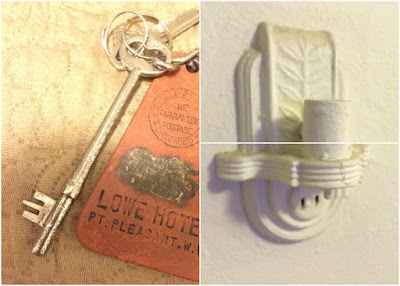 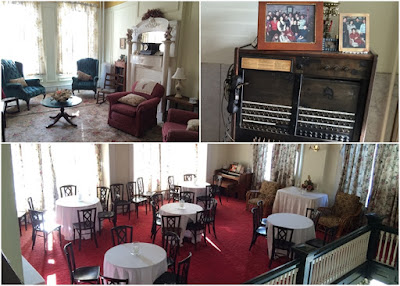 The personal touch of the owners was in full effect that night.  After checking us in, the owners invited us to their dimly lit hotel bar next door to join the few guests staying for the night for a little impromptu at-the-bar shindig by a local country and bluegrass guitarist, who sported a well-honed, soft Appalachia twang and strummed a mean guitar while knocking out tunes from artists like Garth Brooks and Jimmy Martin. Between songs, Ruth let us know what was in and around Point Pleasant: the Mothman was first and foremost, but there were more things to see and do that actually sounded quite interesting that we tucked into our memory banks

Amazingly, another couple who had checked in after we had that night came by the bar and had never heard of the Mothman or any of the lore behind it, or the fact that hotel itself is said to be haunted by ghosts. After we headed back up to our room, I remarked to my spouse, "I think we're safe now; if there's going to be any haunting, it's going to happen to that poor couple who came in late."

Yes indeed, we slept well that night. We would be well rested for our confrontation with the Mothman.