We have had the great pleasure in the past few months of being invited to and attending a couple of craft beer oriented tours by Columbus Brew Adventures, founded by local culinary entrepeneurs and ambassadors Bethia Woolf and Jim Ellison. Our previous experiences with their Brewery District Walking Tour and Grandview Heights Tour have provided their own uniquely fun and quite informative experiences; the latter part of which was a nice surprise for us as relative veterans of the local craft beer scene.

This Wednesday, we had the pleasure grabbing two tickets to what promises to be a very unique event in Columbus Brew Adventures' catalog of tours. The inaugural "Beer, Wine, “Boos” & “Spirits”: A Haunted Brewery & Winery Tour" promised a nice chunk of this area's haunted history mixed in with a tasty sampling of the area's locally-produced craft beer and wine.

As it turned out, the feel of this particular tour, which was hosted by Jim himself, is fairly similar to their Brewery District excursion in that a tour-goer will get an equal if not more of a focus on local history as you do the craft beer side of the equation.

However, the unique subject, combined with the time of the year (just a couple days before Halloween), made this perhaps our favorite Columbus Brew Adventures tour so far for both my spouse and I. Once again the knowledge we picked up proved to be truly fascinating and lent a little more color to both places we had visited many times (i.e. Studio 35 and Barley's Brewing) and had not known about at all previously, such as The Central Ohio Fire Museum.

In addition, the unique combination of topic and season also made me decide that a uniquely-styled write up was appropriate in this case. In many ways, a typical blow-by-blow write up as is typical in my blog posts seemed like it would spoil the experience a bit for future tour-goers. However, I did want to give a taste of what we encountered this night, and it seemed a poetic touch from a master of the macabre (the obvious inspiration from the one and only Edgar Allen Poe) seemed a perfect way do this (helpful links to the places we visited and the historical info are embedded within the poem.)

May your haunting this Halloween weekend be good for you all...

Quoth The Brewer
(inspired by Edgar Allen Poe's The Raven)

Once upon a Hallows Eve dreary
My spouse and I wandered alert and leery
To Wolf's Ridge Brewing lauded culinary score—
When we entered, beer a tapping
Suddenly, a man came a rapping
'Twas Jim of Columbus Brew Adventures lore
He met us that night clapping, clapping at the fore.
“’The haunted tour?,” he muttered
We nodded at the brewery door—
Only this, but a whole lot more. 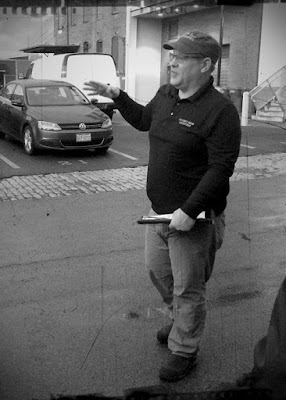 Ah, distinctly it was in a bleak October;
We with eleven other rovers
A haunted brew tour we had gathered for
We prepared for our ghostly tales
In our hands Wolf's Ridge Imperial Pumpkin Ales
Amidst the costumed CYP Club troupe
Benefiting the Columbus Literacy Council group
We'd embark for beer and wine
And to find the Columbus' ghostly lore
Frightened here for evermore. 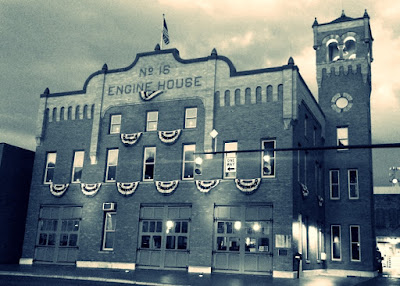 Now to the firehouse stately and proud
Came the members of our crowd
A Museum now lay within its core
Anticipate, our hearts a beating
Alongside Jim, who stood repeating
It was a visitor entreating
Entrance at the museum door
Captain D, was he revealing
His spirit on the museum floor?
Yes, he was, and much, much more.”

From there our souls grew stronger
Hesitating then no longer,
We moved on despite impending horror
No one was even close to napping
Walhalla Ravine we were a mapping
A foreboding hand we had in store
Rolling into Armbruster land
Tension felt and uploading
Trapping us at the fore?
Darkness there and nothing more.

Deep into that darkness peering
Under the bridge of death we're fearing
A dream like no mortal dared dream before;
Don't go or they'll think you're loony
The cursed grounds of the Mansion Mooney
Where blood from the lion's head doth pour?
A young girl's scream
From Glen Echo whispers
A stark murmur restored!
Merely this and nothing more. 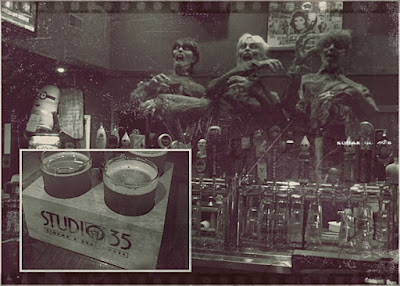 Farther to where crowds are churning
The theatre where ghouls are yearning
Studio 35, a projector clapping louder than before.
Sipping on a Land Grant Kolsch
Our host Andy did not squelch
Ghostly tales from lady Kelly for
There sitting across the bar
The dapper 30's twosome
A threat traveled from afar!
Or was it the wind and nothing more?” 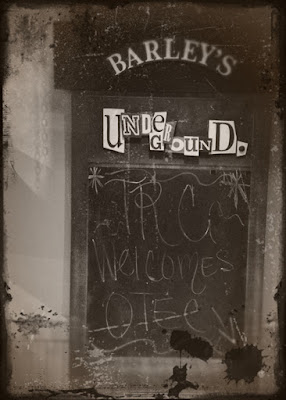 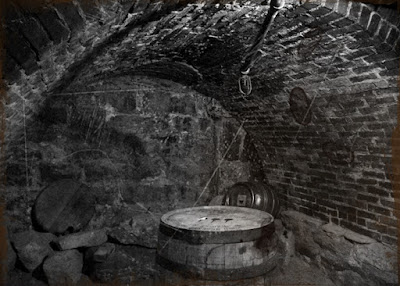 Down to Barley's, our nerves a fluttered
To the Underground, dark and shuttered
When a street named High lay in the days of yore;
Our guide serving delicious Blood Thirst Wheat
When lo! the echo of pounding feet?
Was doom the fate for us in store?
Not a hint of menace made she
Lady Erin perched next to Jim
We drank deep as they declared
The cemetery which this space had shared
Whence only gravestones moved, but nothing more 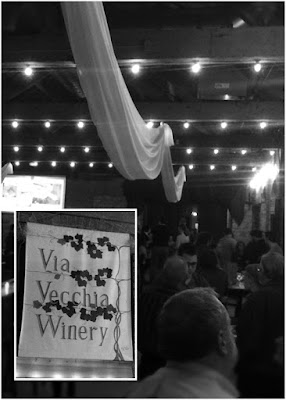 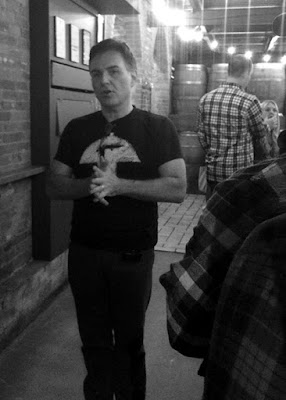 Through an ebony night compiling
To a winery quite beguiling
Via Vecchia and the Raw countenance it wore,
Owner Paolo, shorn and shaven
Declared "Art thou so craven,
To hear the ghastly sights in store?"
We marveled at discourse that plainly
Discussed ghosts that quite so ungainly
Flung bottles and brooms
Flung so hard, across the floor 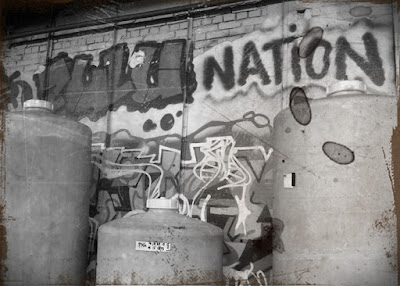 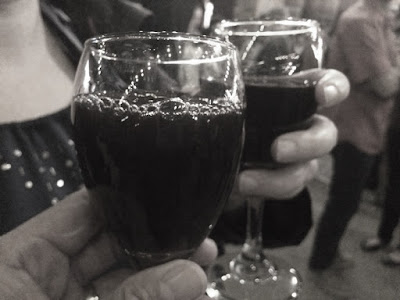 Driving down a street named Mound
With its numerous burial grounds
To return to the place we had been before
Unflustered by the stillness broken
Disembarked, the night had spoken
Haunted lands we did indeed explore
And yet still, a voice did utter
"Do not leave, come have another"
One more ale with a ghostly brother"
Quoth the Brewer, evermore