In September of 2012, my spouse and I had our first experience with Columbus Food Adventures (CFA), a food tour company offering numerous ways for both locals and visitors alike to explore the culinary gems of this area. The first tour, which was a walking tour through Columbus' picturesque German Village, not only touched on the culinary treats within this area, but also gave participants a nice introduction to the rich history of the area.

Flash forward to the summer of 2015. Now reaching its fifth anniversary, this tour company has grown, increasing its offerings both in terms of neighborhoods (Grandview Heights has become another neighborhood-related tour offering, for example) and themes (Nick Dekker, author of the well-known "Breakfast With Nick" blog, now leads area breakfast- and brunch-oriented area excursions.)

In addition, CFA has expanded into another growing part of the area's food scene with Columbus Brew Adventures. Started in September 2013 by CFA co-founder Bethia Woolf and writer Jim Ellison (himself involved in numerous area culinary ventures including the Alt Eats Columbus and Taco Trucks Columbus websites and his own blog (The CMH Gourmand)), these tours offer novel ways to to explore the area's flourishing craft beer scene along with other aspects of Columbus' culinary scene (for example, their "Pitchers and Pizza" tour offers an exploration of iconic area pizzerias along with tasty local brews.)

As a pair who likes to seek out beer-oriented destinations in their travels, I think it was surprising to both of us that we hadn't actually taken a tour with Columbus Brew Adventures when we received an invite by Mr. Ellison himself to join us as guests on their Brewery District Tour, held on a what turned out to be an against recent trends sun-soaked Saturday.

The Brewery District tour offers participants a walking perspective around this historic area, a journey that we found touched on many aspects of the past and current district occupants. For us personally, it also helped us visualize some of the places we knew were in the area that we had heard quite a bit about. Also neat was how this tour turned out to be the perfect pairing with the previously mentioned German Village Tour we took nearly three years ago. These two areas are inextricably linked together by the German immigrants who settled on these once less-than-desirable areas across a ravine (now occupied by Interstate 70) on the south side of Columbus and set up those very same breweries on lands just to the west. 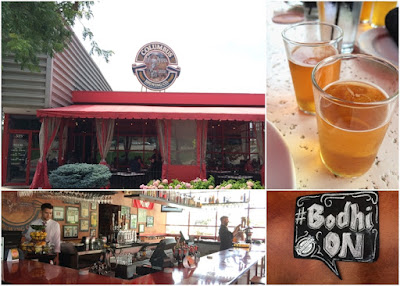 We soon found out we weren't the only ones on our first Columbus Brew Adventures excursion: we discovered our tour guide Jenna was leading her first tour ever for the company, She made an excellent debut, providing a smiling and enthusiastic presence throughout the tour and relating most of the details about the landmarks and places we were visiting off the top of her head. We also had the pleasure of meeting Jim himself, who accompanied our group for roughly the second quarter of our tour and provided some extra illumination on an area and food scene overall that he knows extremely well.

In many ways, we discovered that this particular tour is, to use a university euphemism, the equivalent of "Columbus Brewing 101." Not only do you get introduced to Columbus' brewing history prior to Prohibition, which was all centered in the Brewery District, but also you get an idea of what currently exists in the area as well as an introduction to what is available in the local craft brew scene. While this tour is suited for all levels of craft beer aficionados, there is enough history and other tangential aspects given to make those either not as enthusiastic about beer (one of our party fell in that category) or are neophytes to beer (Jenna encouraged us to bring our inner "beer snob" and put our samples through the gamut of sensory tests before tasting, as well as brought up conversation starters such as what differentiated ales from lagers) and/or the local beer scene feel comfortable. 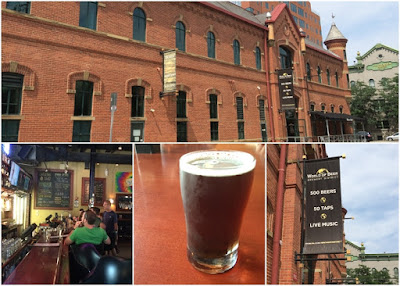 While the focus on the tour leans often on structures related to the Hoster (not surprising with it being the largest brewery at the time in Columbus) and Schlegel (later Schlee) breweries, numerous landmarks and points of interest are covered on the tour. This includes some of the area's eateries (Brick American Kitchen and the third location of Latin-influenced El Arepazo), beer-oriented enterprises (World of Beer and the Columbus Brewing Company Restaurant) as well as the home of Shadowbox Live, a unique performance troupe that has now been operating for over two decades. At each of these locations, participants get a taster of a local purveyor of craft brews (on this tour, local breweries such as Columbus, Elevator, and Homestead, as well as renowned crafters of mead Brothers Drake, were represented.) The eateries also serve a useful purpose in providing more than enough small bites to keep both alcohol effects and hunger pangs at bay. 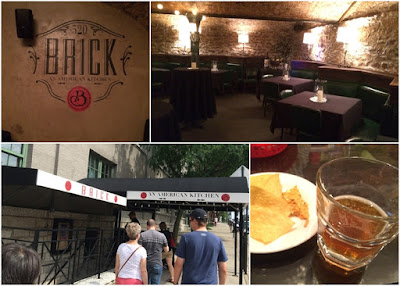 With all the history and details related to the places and landmarks we visited, we found there was still plenty of time to chat with your fellow tour-goer. Beer is by its nature a social beverage, and that seemed to hold true at all our stops with plenty of back-and-forth between fellow tour-goers and our guide herself about beer, common experiences and just topics in general helped made the tour length of three-plus hours go by like a breeze.

For us personally, the Brewery District tour turned out to be a wonderful way to learn about what made this area important in Columbus' long history, as well as introduce us to some of the landmarks and businesses in the area that we had only heard about but never had a chance to visit. Add in the tastes of delicious local beers and eats and some good company alongside, and we had a day King Gambrinus (the patron saint of brewers) himself could celebrate.