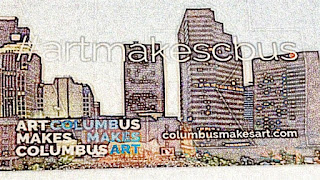 One sign of a thriving metro area is similarly thriving arts community and public interest in the arts. My old stomping grounds of the Bay Area was not lacking in this aspect, with numerous avenues for creative exploration of all art types available for both artists, locals and visitors to the area.

I've come to find that, similar to many previously unknown aspects about this metro area in general, that Columbus and its surroundings sport a pleasantly vibrant arts scene bubbling within its reaches as well. Much of this is event-driven: it seems you cannot find a weekend during the warmer months without some sort of festival or happening. Even during the winter months, monthly gatherings like the Short North neighborhood's Gallery Hop or the Gay Street District's Moonlight Market, and institutions like the Columbus Idea Foundry and the Glass Axis allow locals to explore the creative side of life throughout the year.

My spouse and I have done our fair share of exploring this aspect of Columbus-area living, but as a relative newcomer myself, I've felt like we've barely scratched the surface of what is out there. Thus, it was with interest when I received an invite from the Greater Columbus Arts Council (GCAC) for a special event detailing their " Art Makes Columbus/Columbus Makes Art" (#ArtMakesCbus) campaign, launched this summer with this year's edition of the popular Columbus Arts Festival.  I had read some media stories and scrolled through the associated website briefly before I had received the invite, but I was definitely eager to learn a lot more about the thinking and motivation behind this effort.

Held at the CD102.5 FM's recently opened Big Room Bar radio station, this special gathering, consisting of local bloggers and others involved with numerous aspects of Columbus' art community, featured five local artists whose talents are as diverse as you can assemble in a panel discussion/question and answer style format. This question and answer session was supposed to enhance what anyone can discover about these artists at the campaign's website.

As mentioned by both GCAC President and CEO Tom Katzenmeyer in the introduction, and elaborated in more detail to me by Jami Goldstein, GCAC Vice President of Marketing, Communications & Events, a prime motivator behind the new campaign was to lend a more personal aspect to promoting local artists. She elaborated that the event-driven marketing approach of the past, hadn't necessarily translated into a better economic bottom line for local artists and related organizations. Goldstein stated they had figured out that the human interest factor was not factored enough into the equation, and that the Art Makes Columbus campaign would focus on adding that factor in local arts promotion via its website, various media/social media efforts, and partnerships with the community.

I had noted to Jami my observation that while the website's features and the in-depth biographies were focused on individuals and groups who most people would consider artists, the campaign's Events section included happenings that extended beyond what most people traditionally think of as the arts such as food and athletics. Goldstein said this was done on purpose, as GCAC wanted this campaign to be a truly collaborative effort across multiple groups and art media and, in a way, was something of an approach that had been untried in other locales.

Indeed, as the artists answered questions and spoke to their personal experiences, this human interest aspect really came through in a big way. The Columbus Arts Festival is indeed one of me and my spouse's favorite events to finish, but in the desire to the whole experience in, there are times in my mind when the plethora of booths and cornucopia of media available for viewing become almost too much to choose from.

However, the experience becomes special when we have chosen to interact with the artists themselves. One of my spouse's such moments came from the Columbus Arts Festival during the 2011 edition, when a surprise storm damaged or destroyed a number of pieces from a group of participating artists. She dropped by the next day and made an offer on one particular storm-damaged piece she ended up liking from an artist who was a victim of the storm with the cash she had on hand. The artist gratefully agreed to the offer, but my spouse liked the piece so much that she contacted the artist later and sent her the rest of the money to make up the original pre-damaged asking price.

Better yet, when I entered our relationship on a more permanent basis, I myself ended up enjoying the piece quite a bit, and so much so that I had a companion work commissioned as a surprise gift to my spouse.

Perhaps that's what struck me during the post-panel mingling as well. Initially, some of the featured artists seemed a little uncomfortable with the panel discussion format (to be truthful, most people would be uncomfortable in that setting), but when it came to the mingling portion, the featured artists were just as approachable as the next person, talking as easily about the small things such as their favorite restaurants or love of cats as much as bigger questions about their fields of talent, where they came from, and what drove them in their artistic pursuits.

I asked Goldstein about how the success of GCAC's three-to-five year campaign would be measured; she replied that while there were metrics in regard to things like website visits and similar, an overall sense of their efforts ultimate success would be a bit more difficult to put into hard figures. I pondered that question in the back of my head as the event went on, but discovered the possible ultimate measurement in a response painter David Butler gave to an audience-member question about how to best encourage their young child to explore their creative side. He spoke about spending time with his niece this summer, who one day made the observation that he wasn't making a lot of money via his painting pursuits.

Butler acknowledged this to be true, but responded that he was doing something that was making him very happy. He followed that by asking her what her favorite things in life were, to which she responded chocolate and hula hoops.

"Well, if you could have chocolate and hula hoops everyday, wouldn't you want to do that?

His niece thought about it and said "Yeah, that would be awesome."

Butler responded to her, "That's how I feel. I'm living the chocolate and hula hoops life."

I think for most artists, living this "chocolate and hula hoops life" i.e. pursuing their particular talents on a lifelong basis to their heart's content is really the true measure of success. Hopefully, a successful #ArtMakesCbus campaign will allow local artists to feel a little more comfortable with that pursuit on both the public awareness and the economic side of things.

Update: The original post neglected to credit the artist, Kelly Zalenski of those fine cityscape paintings featured in this post. You can check out her portfolio at her website klzart.com
Posted by Joe