There are many players on the market in the what you might call the "Upscale American Causal" category, with the Columbus metro sporting its fair share. As time has gone on, there seems to be one place that my spouse and I have ended up at that has met the following general broad criteria:
This detailed criteria list refers to the locally-based mini-chain Matt The Miller's Tavern.

Started in 2008, Matt The Miller's Tavern original location was established by Craig Barnum in the city of Dublin, with subsequent locally-based branches going up in Grandview and Polaris (a fourth location exists out of state in Carmel, Indiana.) Barnum himself has been a visible presence in the local restaurant scene for nearly two decades now, starting with his purchase of Oscar's in Dublin in 1995 and involvement with other familiar eateries like Tucci's (still owned by his CLB Restaurant Group) as well as the Brazenhead Irish Pub locations in Grandview and Dublin.

For us, our experiences have come at both their Dublin and Polaris locations. While there are architectural differences between the two roughly same-sized locations (neither will truly evoke the image of a traditional old-style tavern at first exterior glance for most) the Dublin location definitely gives you more of that cozy tavern feel once inside,  Both locations sport two fairly distinct main areas geared toward a more traditional restaurant seating area and an area centered around a central bar; I imagine much of this is to allow for a more kid-friendly atmosphere for families who don't want to deal with the hubbub that a bar can bring.

As previously alluded to above, Matt The Miller's menu items have been generally solid creations, with enough of a "unique twist" (to borrow from the CLB Restaurants website) on some items to make dining a small but pleasant notch above the usual. Almost all of our group outings have involved ordering some combination of their appetizers, sandwiches and flatbreads, and we have found most of them to be fairly tasty. Favorites of ours include the Matt's Sliders (served with bleu cheese and red onion marmalade on brioche buns) and Bavarian-Style Pretzels from the appetizer menu, the various flatbreads (especially the Pear and Gorgonzola and Black and Bleu,) the Peppercorn Burger, and the Fish and Chips (especially with the malt vinegar; just ask your server.) 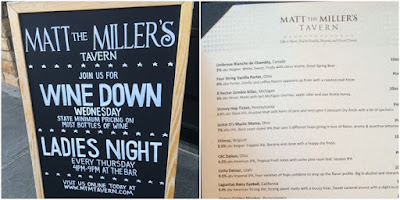 True to the tavern name, Matt the Miller's offers a line of craft beer, cocktails, and a line of top-shelf scotches for the diner.  We've had pints from local Ohio brewers such as Columbus, Four String, Jackie O's and Seventh Son, among others. In addition, the eatery offers fairly special nights (such as Wine Down Wednesday, where wine is offered at state minimum pricing) as well as budget-friendly menu options (such as the $10.99 combo plates, which gives you a 1/2 sandwich or flatbread along with a soup or salad.)