The state of Ohio, along with much of the Midwest portion of this country, has been a hotbed of craft beer growth over the past year. A recent Nielsen report, as noted in this Columbus Underground article, notes that the Columbus area landed in the top 10 cities in both dollars spent on craft beer and growth compared to the previous year; Cincinnati and Cleveland also made appearances on this list.

My spouse and I have enjoyed exploring this growth immensely, from the "old guard" institutions to the newcomers and everything in between. Two of our most recent journeys exploring the area's craft beer scene are documented here with Zanesville's Weasel Boy and Delaware's Restoration Brew Worx.

Weasel Boy Brewing: Founded by Jay and Lori Wince in 2006, Weasel Boy is something of a tweener in Central Ohio's craft beer scene, coming in well after breweries like Columbus, Barley's and Elevator were founded, but before the fairly substantial and continuing second wave of craft breweries splashed on the local scene in the current decade. Situated comfortably in the brick-walled Carl L. Mitzel building in South Zanesville along the banks of the Muskingum River (views of the river are available from inside the space), the brewpub lies roughly one hour's drive on I-70 east from the Columbus metro area.

The interior of Weasel Boy is quite spacious, with the main brewpub area (along with requisite beer barrels and tanks along with seating) as well as an event space and business offices. Works from local artists are regularly rotated on display, and the venue has event spaces to host large parties and similar.

My first real experience with Weasel Boy Brewing's beer was at the Columbus Winter Beerfest, where I had one of the more interesting brews of the night in the form of their smoked Rauch Weasel Porter. On this trip to the brewpub, we decided to go with pints of their offerings rather than a full-fledged flight and found the more interesting brews to be their seasonals. While the Dancing Ferret IPA and Brown Stoat Stout were merely okay in our book, we both agreed that the Mango Wheat (recently replaced on the tap menu by their Oktoberfest) was quite enjoyable, with a solid mango presence but just enough wheat presence to balance things out. A perfect lawnmower beer indeed. Also interesting was the Paw Paw Pale Ale - if you are a big fan of that unique flavor, this beer, strongly tilted with toward the fruit in its profile, will please you in spades. 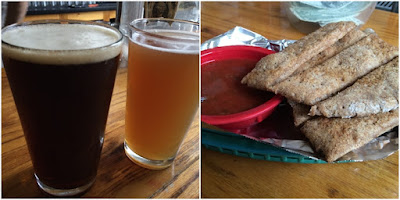 Weasel Boy's food menu is limited, but in this case the specialization works. Their whole-wheat, beer infused pizza crusts with a side of pizza sauce were a great snack-while-you-drink; based on the reaction of the couple sitting next to us at the bar, their full-fledged pizza, which is offered as a build-your-own version as well as a few preset combos, is also a winning dish. Diners also have the option of salads and pop drinks from the brewery's menu.

Restoration Brew Worx: During this summer, we discovered that downtown Delaware, roughly one half-hour north of the Columbus area (depending on traffic on the sometimes cloggy US 23), has a lot to recommend it for an easy day trip, from antique shops, interesting eateries (including a very memorable dinner at Veritas Tavern) and craft beer-oriented establishments. Staas Brewing. at a mere two years old, counts as the veteran member of the local breweries now with the very arrival of newcomer Restoration Brew Worx, which opened its doors this May.

Similar to a brewery we have become quite familiar with in Clintonville's Lineage Brewing, Restoration was founded by a foursome of acquaintances, as noted in this Drink Up Columbus article. In my mind, the comparisons don't end there - their respective settings are reasonably compact but overall feel uncrowded relaxing, sporting both outdoor and indoor seating and a general "hang out and stay awhile" kind of vibe.

Based on this first sampling, Restoration is brewing some very tasty, highly drinkable brews. All the selections on the flight we ordered were quite delicious, including their Rush Porter, unTamed Blonde Ale and Big Bag of Judgment Belgian IPA. Interestingly, the fourth taster of the bunch had a unique little side note on the big board inside, stating that Restoration's brewer "hates Hefeweizen". While Hefeweizen is not necessarily either of our favorite styles as well, the very warm and humid conditions on our visit made the great balance of banana, clove and wheat on the Effe-weizen Hefeweizen the winner for a second order of a full pint.

Restoration's menu sports a select inventory of appetizers, sandwiches and entrees, and for us the ginger Fried Chicken Wings and Soft Pretzel with two different dipping sauces were solid fare. In recently announced news, the brewery has announced they will be featuring the frozen goodness of Indulgence Ice Cream, which has been featured in local area restaurants such as La Tavola and Ella.