In contrast to the gleamingly restored vehicles we found earlier this year at The Depot, the Northwest Columbus event center that hosted Dinner Lab's Crawfish Boil we attended earlier this year, most all of the train cars you'll find at Worthington's Ohio Railway Museum show all the rust and wear that years of operation bring upon these iron horses.

Have a conversation with anyone who volunteers their time at the museum, and they'll most likely acknowledge that keeping the museum operating has not been easy. Past periods of neglect, several bouts of potential or temporary closure (including a power line mishap in 2010 and a fence dispute with a neighbor in 2014), a volunteer-powered staff, and a fluctuating revenue flow (all money made goes back into operations and train restoration) has threatened the museum's existence. But much like the fictional small engine in the 1930s-book "The Little Engine That Could", the museum keeps going in spite of long odds.

Opened originally in 1948 as an endeavor by the Central Ohio Railfan Association's efforts to preserve an old railcar destined for the scrapyards, the tidiest views at the museum lie within the smallish but nonetheless homey main building, where collections of various railroad memorabilia are displayed neatly within the cozy interior, and little snippets of information (such as the story behind ticket hole punchers and the attachment conductors get for them.) 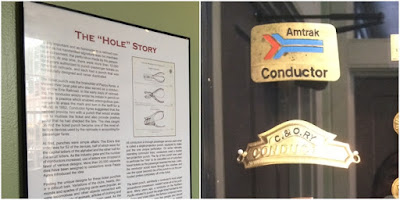 Outside this building to the tracks, tidy displays fall by the wayside and train cars take over your sight lines. The easily discernible jewel of the bunch is the #578 Norfolk & Western Steam Locomotive, which we learned at 16-feet-high and 90-feet-long actually rates as middle-of-the-pack size-wise in that category. However, other cars around the facility give away the slow but steady toll of time and usage vs. the earnest but equally under-powered struggle by the museum's volunteers to bring these trains back to their former glory. This aspect really didn't seem to deter the enjoyment of that day's visitors and especially the younger tykes, who seemed quite happy to walk around and immerse themselves in a bit of history. 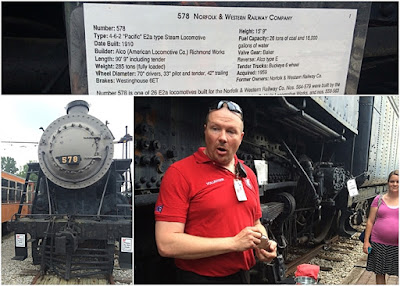 While money and time may be in short supply, the sheer enthusiasm the volunteers have for trains is as evident and audible as the rumble of these machines down the tracks. Whether it be the discussion of how steam engines work by one volunteer, the explanation of the history and future plans the other museum train cars  or the lively spiel of the conductor as the operating train car of the day (the Ohio Public Service Company #41, a street car that had tours for three different transit agencies in the state prior to finding its way to the museum) took us on its brief little journey across State Route 161 to the south into the Colonial Hills neighborhood of Worthington and back. 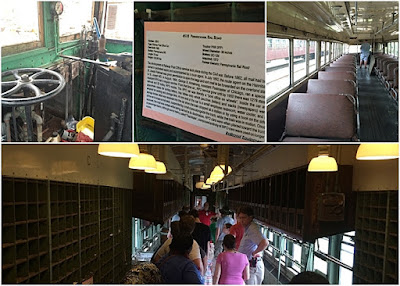 Admission into the Ohio Railway Museum gets you unlimited rides on their rail car trips (the operating rail car rotates on a regular basis) as well as free reign to roam within open portions of the facility. Visitors can take a tour of most of the train cars on site on your own or take a guided tour with one of the volunteers. The Museum also offers special programs throughout the year, including the upcoming Halloween-oriented "Ghost Trolley" and the Christmas-oriented "Letters to Santa" programs.