It might be partly genetics, and might be partly geography (I've grown up mainly in sunny warm locales most of my life), but overall summer may be my favorite season of the year. However, in my old stomping grounds of the Bay Area, the seasons of the year are much less defined than here in the Midwest. Typically, a Bay Area summer boosts the temperatures, especially inland, and lawns turn brown from the lack of rain (sadly, the latter has been too much of the trend the last few years no matter the season.) The most pleasing effect the summer brought for me was to remove the hassle of toting cooler-weather gear around. With that said, many inexperienced souls traveling within the borders of San Francisco proper often feel the unexpectedly biting chill of brisk onshore winds and ocean fog, fueling summer sweatshirt sales from the city's numerous souvenir shops like nobody's business.

In contrast, summer brings a much more diverse mix of elements to Midwest residents. Besides the weather-related events like pop-up thundershowers and more severe weather phenomena, nature and the surrounding Central Ohio agricultural areas give me much more sensory feedback. I have learned to tune into what my spouse has long grown familiar and come to associate with the season: the constant whir of unified cicada chirps, and the various fragrant smells of earth and plant life, from naturally occurring colorful blooms of all sorts and the various fruits and vegetables, both wild and cultivated for agriculture.

For both of us, the season also has come to mean it's the prime time to experience Harrison West's Katalina's, mainly due to its prominent outdoor patio space. While outdoor patios in the Columbus area are not unique to this eatery, the summer and warmer weather in general is especially kind to this eatery. The sight of sun-drenched diners of all ages, including an occasional four-legged pup or two, engaging and eating underneath the outdoor, umbrella-covered patio tables is uniquely appealing in its own right. Even when I am simply transiting through the neighborhood, the sight of a visibly bustling Katalina's brings a smile to my face.

Lack of summer sun and heat should not be a deterrent to exploring the unique eatery that is Katalina's during anytime of the year, however. Indeed, owner Kathleen Day has taken what had been a sandwich shop back into 2009 (and, farther back in the day, a gasoline station) and has slowly but surely imprinted her unique design flair within this compact interior space. The mixing and matching of antique furnishings with playful elements such as a chalkboard wall and new patio tables emblazoned with the colorful doodles and words of numerous previous diners, paired up with wooden benches and vintage chairs, makes for a visually appealing motif.

The interior in general feels something like the coolest kitchen around. Antique furniture provides the shelving for Katalina's inventory of mainly local products, while a refrigerator case provides an efficient way to pick up pre-filled cups of fruit drinks such as their "famous" Watermelon Mint Lemonade and Blood Orange Juice (a favorite of my spouse's) along with Cold Brew Coffee from local roaster Thunderkiss (a separate area next to this case hosts the hot-brewed java.). While ordering your food, you can take a peek at the bustle of people in the actual kitchen space often working feverishly to keep up with orders. 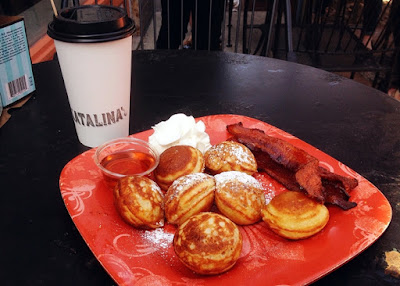 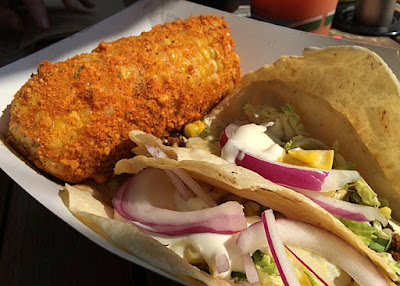 Katalina's signature dish, and justly so, is their Pancake Balls. Unlike the heavy, doughy abelskivers cousins we've had previous at the Danish-themed tourist town of Solvang in Central California, this eatery's versions are heaven-light and airy by comparison. Covered with powdered sugar, and paired with Ohio-produced maple syrup and a couple slices of bacon, choosing this dish is often less difficult than figuring out which decadent filling (Nutella, Dulce de Leche or Pumpkin Apple Butter) you want inside these spheroids of deliciousness.

Throughout the years, Day has added menu items that that reflect both Southern and Latino influences, including but not exclusive to their Pueblo BLT to their Southern Brown Betty Biscuit Balls. We have not had the chance to try those dishes yet, but the items we have tried have never been simply ordinary. From the previously mentioned Pancake Balls to the Mexican French Toast (enjoyed immensely by a niece of ours), their Huevos Rancheros (lauded by Travel + Leisure Magazine as some of the best in the country and featuring, like many of Katalina's dishes, Shagbark Seed and Mill chips) to newer creations like their Housemade Chorizo Tacos, new and improved Katalina's Migas (an egg-lovers dream featuring five eggs scrambled with Snowville Creamery creme fraiche) and Hens In A Basket (a fairly simple concept accentuated by a tasty brussels sprout hash) Katalina's menu always seems to give always a dilemma on our return visit: go with known deliciousness, or something new that promises to be equally so?

It's a tasty job but someone's gotta do it...right?