You Get In Line, I'll Get A Bowl: Dinner Lab's Clash of the Crawfish

When Dinner Lab, an organization based out of New Orleans that specializes in communal pop-up dinners with area chefs, announced it was coming to Columbus, it sounded intriguing enough to me to plunk down the special introductory membership fee. Back in California, pop-up dinners were increasingly the rage just as I was setting foot for the Buckeye State, and had always thought it would be cool to drop in on one of these types of events.

While this particular pop-up dinner isn't surprising to me given the organization's Louisiana roots, I am a little surprised that my first event I would attend would be their nationwide "Clash of the Crawfish" event. I don't normally go out of my way to sample shelled water-dwelling creatures in general.

Well, perhaps less surprised when you consider my spouse's reaction when I mentioned this upcoming event: Ooohcrawfishboilyeswe'regoing! (or something quite similar.) My spouse was introduced to the concept of a crawfish boil during her days as a grad student down in the Houston, Texas area (which has a fairly substantial Cajun-Creole culinary presence) and had been itching to do something similar ever since she came back to Ohio.

As previously mentioned, Dinner Lab's events are meant to encourage interaction among diners, and the setup on this pop-up dinner helped. The long tables helped group people together, and as we found out, people who tend to go in on a concept such as this seemed to be more inclined to chat naturally. Our conversations with those seated around us revealed a native of Louisiana, a veterinarian in our new city of residence, and a fellow alumna of my spouse's graduate school among our table mates. 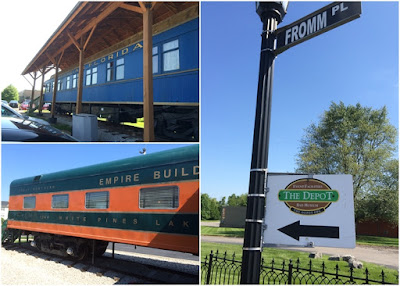 Our event venue, announced a day before the dinner as is the typical Dinner Lab parlance, turned out to be The Depot, a rail museum in Northwest Columbus off Old Henderson geared to hosting group events and dinners. Diners were free to roam around and explore the various pieces of railroad memorabilia placed throughout the property, including the original depot established in Brice, Ohio in the 1880s, a one-third-scale train (that was not running during our dinner, alas) that can actually haul visitors around the property. Various rail cars were also scattered throughout the property, each with its own history and open for visitation by Dinner Lab diners. Perhaps the most visited rail car of the day was Car 100: this passenger car, which served as the venue's main backdrop throughout the day, was in its former life the home for VIP employees, performers and guests of Ringling Brothers Circus in the late 1800s into the early 1900s.

Oh, yeah, what about the food? As Dinner Lab staff who were attendance stated during the event, with the lone exception of a tremendous corn panna cotta (featuring sweet potato gingersnap and toasted pecan with a hint of lemon oil), the dinner was meant as a nod to tradition and an acknowledgment of their roots in The Bayou State. The other dishes, from the Kitchen Sink Gumbo to the German Potato Salad to, of course, the crawfish boiled with corn, sausage and "fixins", were all traditionally prepared with nothing too extravagant in terms of flavor profiles or variations.

Being both the first ever crawfish boil and the first time I have EVER had crawfish, I decided to go for the gusto. It took a little bit of time before I got my eating technique (described on Dinner Lab's menus as "Pick A Winner/Grab That Sucker/Twist and Snap/Pinch Peel and Eat") more or less mastered, but once I did, I held my own in downing my share, even sucking the juices out of the head sections. However, there really was no keeping up with my spouse, who was in crawdad nirvana, or many of the gathered lovers of these little river creatures.

Our first batch of crawdads seemed to have not quite enough time in the boil spice-wise; our Louisiana native at the table thought them pretty mild as did we. However, this was rectified with the second tray, with a much more pleasing spice level.. All dishes in general were all well-prepared and, when taken with the experience in total, and the adult beverages (craft beer from Louisiana-brewer Abita and an assortment of wine) were the perfect accompaniment.

Dinner Lab's "Clash of the Crawfish" turned out to be a fun, worthwhile experience. We look forward to sampling more of their Columbus-area offerings in the future.