Since my time here in Ohio, I have overheard several mentions of a regional fried chicken specialty hailing from the Northeast Ohio town of Barberton. As the story goes, European immigrants had been for many decades putting out a unique style of fried chicken that has made this town of roughly 27,000 people a culinary destination for both locals and visitors alike and earning it a reputation for some as the "Fried Chicken Capital of the World."

While intriguing, this wasn't quite enough to warrant a special trip up simply to try the chicken in my book. But as fate would have it, a recent trip to pick up a friend of ours took us into the Canton area, which would be followed by subsequent journey together to the northwest area of the state. Barberton was one of several towns perfectly situated for a sit-down lunch, and the mention of this fried chicken basically sealed the deal in terms of what we'd be eating.

Barberton currently has four separate eateries serving this specialty, and White House Chicken, with four locations around the immediate area, proved to be the most conveniently located for our travels.

While White House's space has been modified and renovated over its six decades of existence, its original modest beginnings are reflected in its interior. There is really nothing fancy about the space; the tables, chairs and booth seating are definitely from an earlier decade or three. But that seems to be just fine with the restaurant's owners - as their menu description declares, White House has "found something that works and...stuck with it."  The regulars who filed in after we did didn't seem to mind too much either; in many ways, it reminded me of a community hall, where members of an organization or group would gather on a regular basis for a home-cooked meal to celebrate some upcoming holiday or event. 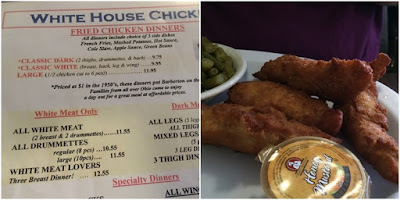 We ended up getting the regular fried chicken, chicken tenders and some fried fish fillets along with a multitude of sides for group sampling. Barberton-style chicken is essentially a Serbian variation on the fried bird. Traditionally, the bird is chopped up in smaller pieces and prepared very simply by rolling each piece in flour followed by eggs and breadcrumbs. Finally, the pieces are fried in lard. As we found out, this process results in a chicken crust that is uniquely crunchy and chewy at the same time and a juicy interior. The crust of the fish fillets also took up this texture, though to a lesser degree.

The lack of seasoning seems to be a point of division among fried chicken aficionados - some do not care for it, but for us it was fine. For me personally, it reminded me of my dad's own simple version of fried chicken, which was not breaded but rather lightly enhanced with a little bit of salt and pepper. The chicken tenders also fell into the same flavor/texture profile as well.

The menu is also pretty simple (recently instituted menu changes have alleviated some confusion in regards to the white meat/dark meat piece groupings) for diners: basically, it all depends on how much fried chicken and/or fish you want, your choice of white and/or dark meat, as well as any number of sides. Continuing the simplicity theme, the sides themselves are base-model affairs from the bread slices to the green beans and the applesauce. Their touted hot sauce (which is jarred and available for purchase) is not really spicy at all, reminding me more of rice-laden tomato soup; your enjoyment of this side will definitely vary. Perhaps the most enjoyable side for all of us was the coleslaw, texturally pleasing (chopped versus shredded cabbage) with a straight-up vinegary tang.

I'd say all fried chicken aficionados owe at least one visit to this area of Ohio to give this unique take on the dish an honest shot. Whether it's White House or one of one of the three other eateries serving this regional specialty, you can be assured that you'll be taking a bite of local history as well as a little taste of the old country.