Most people have that restaurant or two where you order something by default. In a sense, this was set up very early when it comes to Brazenhead Irish Pub. During our long-distance dating phase, my spouse had decided a perfect meal after one of my earliest visits to Ohio would be the half-price burger at Brazenhead's location in Dublin. Indeed, the burger was a perfectly satisfying meal after the long flight over, and since then Brazenhead has become basically a B&B (burger and brew) spot for us.

Based on the original Brazen Head Pub, built in 1198 in Dublin, Ireland, the locally-based Brazenhead Irish Pubs (part of the Historic Dublin Restaurants Group) got their start in 1998 appropriately enough in Dublin, Ohio. A second location soon followed in the Grandview neighborhood a year later, and despite squabbles by the original three owners about various business matters over the years (the partnership broke up officially in 2011) these pubs have continued to attract diners and bar-goers in large numbers (the cozier Dublin location tends to get more cramped and hectic compared to their more spacious Grandview cousin) since their opening. 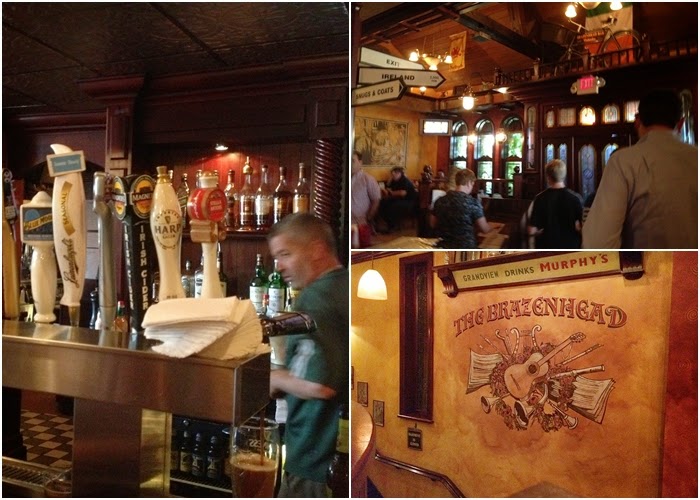 Both locations do their best to evoke what it might be like at the original Brazen Head across the Atlantic within their interiors, but unlike its Irish counterpart, these locally-based pubs mostly stay away from Irish standards, basing their offerings mostly around hamburgers and sandwiches. Being a pub, the back of their main menu is dedicated appropriately to "Liquors and Libations", which includes a good inventory of Irish Whiskey and Scotch selections. A separate menu details a select beer menu, which includes several Ohio-based and Irish beer brands on draft.

While burgers and brews have been our main go to here, we found that you can go beyond those choices at Brazenhead and find some good eats. While this pub isn't normally the place you'd necessarily go for a three-course dinner, we found they did a pretty credible job with their side salad, pretzel sticks and creme brulee dessert during their special Restaurant Week menu.

However, even on this special menu day, we both ordered a burger off their menu - no sense breaking from tradition, right?