For the first couple years after moving to a new locale, pretty much everything for the typical person is bright, shiny and new. Even though the normal course of change is happening around you in terms of places of business opening and closing, you rarely have the attachment needed to feel the loss of that place compared to those who have lived in the area longer.

I started realizing in the last year or two that I've been here long enough to more acutely feel those losses. They are all fairly sad affairs, but they range from mild disappointment (while I got to experience German Village's longstanding Bierberg Bakery's unique European-style cookies and pastries only once, I still feel happy that I did get to sample their wares.) Others are in the more begrudging category - my completed but unpublished review of Mya's Fried Chicken remains in my inventory ready for a quick addendum in the perhaps vain hope that they'll emerge phoenix-like to return to Columbus' food truck scene.

In the case of Short North based Surly Girl Saloon, my spouse and I feel sad, similar to a good friend who is leaving the area for good, and knowing that you will probably never ever meet again.

I had a longer time than most to develop a relationship with this eatery, a longtime component of Elizabeth Lessner's Columbus Food League of restaurants. Opened in 2005 in what was then an equally surly part of the Short North (things have calmed down considerably since then), the restaurant has continued to receive consistent patronage even up to its surprising but perhaps really unsurprising announcement (based on the local media reports) to shut its operations at the end of this month.

My visits to the Surly Girl started during the long-distance dating phase with my spouse; these regular visits continued after my move out here, our marriage, and beyond. We have been here with friends or family in tow or just the two of us for Sunday brunch. Along with Northstar, Surly Girl has been an eatery that we considered almost always an option, especially when it came to breakfast or brunch.

Surly Girl's funky and seemingly slapdash cowgirl and pirate interior decor in some ways reflected the collection of denizens who would seek a meal within its walls. I've seen the straight-laced, goths, nerdy-types, endurance athletes, the fashion-centric, college students, seeming hipsters and any more people within its walls, and often all at the same time. We'd joked often to ourselves that we were too much of the first category to look like we fit in here, but neither of us ever truly felt out of place at the Surly Girl on our visits. 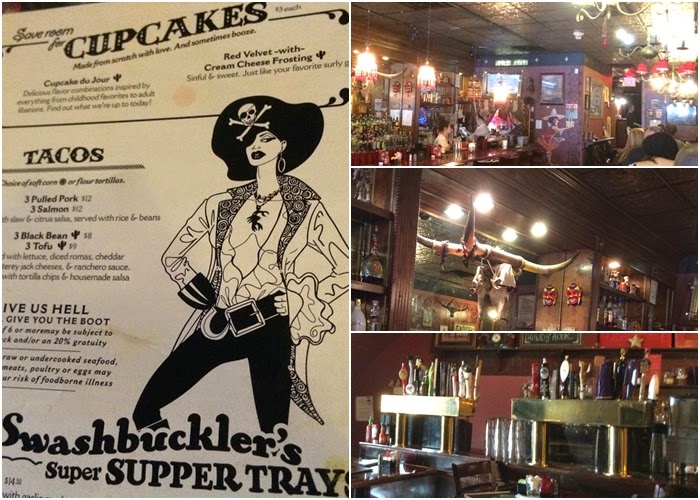 A general Southwest theme is found throughout Surly's base menu, with items like Frito Pie, Pulled Pork and Black Bean Huevos Surlitos, Posole Stew and a Bandito Burrito blending in with other various sandwiches, salads and sides. A leftover from their initial startup days, personal pizzas also provide an option to hungry diners. Of course, you can't call yourself a saloon and not have adult beverages, and Surly Girl has plenty of liquor-based options as well as a decent-sized selection of draft beer, including several Ohio-based craft brewers such as Barley's, Hoof Hearted and Great Lakes.

Of course, when we heard the news of Surly Girl's imminent closing Monday afternoon, we knew we would have to pay one of our go-to restaurants a final visit, and decided to go that night to pay our last respects. If this night (a typically slow night in the restaurant world) is any indication, Surly Girl will be closing with plenty of fanfare, as a crowd slowly built up and the line to get in had spilled out to the sidewalk by the time we left.

It seemed only appropriate to grab a beer on this last meal in  and were quite happy with our Fat Head's Starlight Helles Lager and Seventh Son Lost Sparrow Black IPA. We decided we would go the pizza route, simply because it had been quite awhile since we had ordered one of their personal pizzas. In the past, we had pretty much surfed their menu and gotten a wide swath of food items. While nothing we've ever had would be considered gourmet or earth-shattering, Surly Girl's items were consistently tasty and the portions were always filling.

In the various local media reports that were released announcing the eatery's closing, the three original "surly girls" (Lessner, Carmen Owens and Marcy Mays) stated that the combination of new interests and projects as well as the feeling that Surly Girl had finished the job it was meant to do. As Owens mentioned on web-based media source Columbus Underground, "It just feels like it’s up to another generation of businesses and residents to keep the ball rolling here.”

While we personally wish the saloon had a few more years left to go, we can definitely understand the sentiment. We truly wish everyone there the very best, and may the last week for the Surly Girl be as sweet as this Red Velvet Cupcake, a restaurant tradition which is at the same time the very first and, alas, the very last time we have this traditional dessert here. 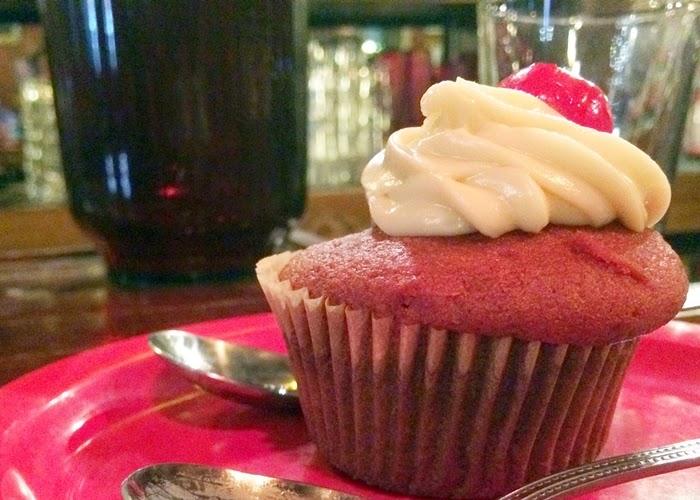 The Surly Girl will be officially closing its doors this weekend on Sunday, April 26th.