Much like Columbus and many other parts of the state of Ohio, the city of Dayton has undergone a craft beer revival in the past couple of years, represented by companies such as Warped Wing, Toxic Brew, and Hairless Hare, among others. While most of the recent arrivals on the scene are interested in craft beer's present and future, Carillon Brewing would like to take you back to beer brewing's past, both in styles and the Dayton area itself.

One might guess from the focus that Carillon Brewing is not the usual startup venture, and that presumption would be correct. Carillon Brewing is part of the Carillon Historical Park, which is run by Dayton History, the official historical organization dedicated to preserving the history of Dayton and Montgomery County as a whole.  The brewery is one of 25 historical buildings on the 65-acre site, which provides visitors an overview of the area's history throughout via numerous exhibits.

Launched at the end of 2013, the brewery was meant to give visitors a total sensory experience on the brewing process in the 19th century. Indeed, on our visit here with friends from the area, we got that feel very early on, from the labeled barrels of fermenting beer surrounding the grain roasting area, the combo tavern/barn-like interior, and the tavern staff, who were all decked out in period clothing. Like the other historical buildings at the park, visitors can learn a fair amount of the beer brewing process and Dayton's brewing history via numerous informational exhibits scattered throughout the interior. 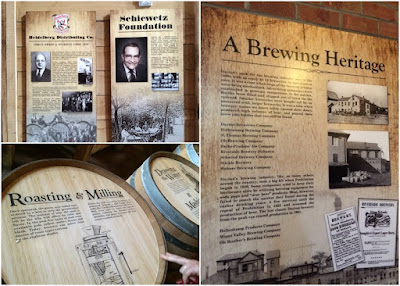 Our waitstaff member gave our group the summary of Carillon's purpose, mentioning that typical brewery and food production activities take place everyday of the week. He also mentioned that the brewery offered a "Brewer For A Day." which offers people a chance to spend the whole day immersed in the process as it existed over 150 years ago. As far as the beer, he explained Carillon took typical beer recipes from the era to brew its four basic beer styles (Porter, Irish Red Ale, Coriander Ale and Berliner Weisse; a cask ale is occasionally available as well.)

He added that the current brews were on older generations of yeast, which gave them more of a sour tinge than the modern beer drinker might be used to; however, this info didn't dissuade us beer drinkers to order full flights. True to expectation, that slight sour tinge was noticeable (esepcially in the Porter and Irish Red Ale) in these typically non-sour styles. We all found that quality uniquely enjoyable, though I imagine there would be a few who may not agree with that variation. I also suspect Carillon's renditions of those two styles fall closer to description when brewed with newer batches of yeast. Those who prefer a solid, pleasant brew to take them through their meal might be best served by the biscuity Coriander Ale, while their version Berliner Weisse is sufficiently tart and true to style.

For those who are interested in adult beverages but aren't interested in the in-house brews, a selection of draft and bottled beers are at the ready, as well as wine and liquor drinks. Also available for diners are the "Temperance Drinks", which include a house-made ginger ale and root beer.

Carillon's restaurant fare leans toward the heartier, drawing from traditional English, German, and Irish dishes with some modern tweaks such as a few salads and a kid's menu. For us, the heartier fare was just fine and generally was quite tasty, from their quite eggy German Potato Salad to their Reuben to their very tasty Wurst. The in-house baked items, from their spent grain crackers to bread to pretzel braid make for nice munching should a full meal not be in order.

Carillon Brewing offers a uniquely interactive and historical brewing-related experience combined with some tasty eats, and is definitely worth a visit when you're in the Dayton area.