In many ways, traveling through the more isolated regions of the country make finding some good eats a more satisfying experience when you do find them. While nothing we found on our trip fell into the "oh my you've gotta' drive 400 miles out of your normal trip to go here" category, what we did end up finding and visiting are assuredly worth visits if you're nearby.


Hillbilly Hot Dogs: As we found out, the Appalachian part of Ohio and West Virginia along the Ohio River is something of a hot dog haven. Athens, which we passed through briefly, had O'Betty's Red Hot! recommended to us by the folks at Columbus Brew Adventures (alas, that will have to wait for another visit), and there seemed to be many places along the route touting their wieners, brats and everything sausage-related.

But there was one place we targeted for our hot dog fix on this trip, mainly because it worked out perfectly for lunch as we toured both sides of the beautiful river landscape between Gallipolis, OH/Point Pleasant, WV and Chesapeake, OH/Huntington, WV, and was absolutely dripping in the kitsch we love to dive into quite a bit on our excursions.

Hillbilly Hot Dogs, opened up in 1999 by Sonny and Sharie Knight, is a place that both defies (lives up to?) expectations in two main ways. The first is what is essentially a glorified hot dog stand's worldwide notoriety: besides the features on numerous food-oriented shows and media publications, one can easily spot the handwritten messages of folks on just about every spot in the interior who have visited over the years from places afar. 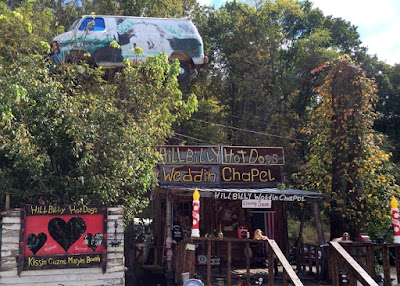 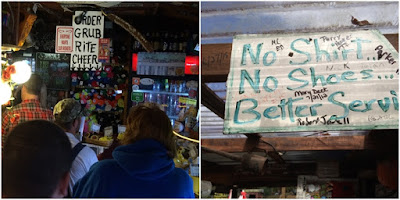 The second aspect is its sheer over-the-top play on the hillbilly stereotype: junkyard-style decor, numerous word misspellings and chunks of back-country wisdom are seen everywhere.  I suppose it could be considered offensive to some, but the Knights take it to such a level that it cannot be taken for anything but a cheeky, semi-self-deprecating nod to that perception. Even the numerous locals that I saw (several on repeat visits with family and friends) all took it in stride, and they were far more inclined to talk up the menu of tasty eats. These particular hillbillies are a lot more sly than one might think.

The menu? The most obvious comparison for us is Columbus' Dirty Franks in terms of wide variety of wiener toppings and styles to please a whole host of visitors (for example, hot dog variations for the college folks from The Ohio State Unversity, University of Kentucky and Marshall University.) Standard pop beverages are on the menu, but you can order a beer with your grub as well (Hillbilly offers West Virginia craft beer selections from Mountain State and Country Boy Brewing if you're not into the macros.) After grabbing seats in the "luxury" school bus interior (those folks who are either claustrophobic and/or need a slightly cleaner atmosphere should opt for the upstairs porch area), we waited for our hot dogs, which despite the crowds came in fairly short order. 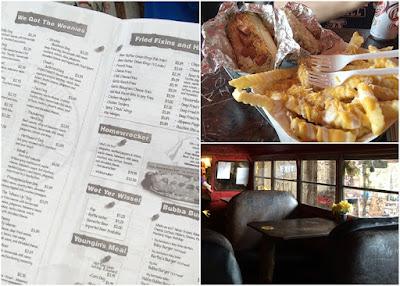 The previously-referenced (Marshall) Thundering Herd Hot Dog (with habanero sauce, nacho cheese, homemade chili sauce, jalapenos, onions and slaw) and my Strickly Business Dog (chili sauce, shredded cheese, mustard, onions, slaw...and yes, topped with Spam) were all satisfying in an artery-clogging kind of way. Topped off with a side of garlic ranch crinkle-cut fries (one serving is plenty for two normal-sized appetites), it made for a lunch that would keep us fueled well through dinner time in more northern parts of the Ohio River valley later on. 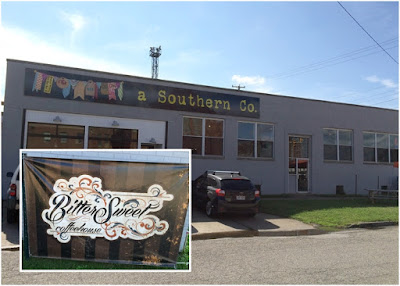 A Southern Company/Bittersweet Coffeehouse - take a chunk of a Franklinton-area warehouse and spiffy it up, throw in a coffee place and a fashion-oriented boutique from the Short North, and toss in a food-truck-sized weekend brunch menu for good measure. Drop this mixture into a West Virginia college town (Huntington, home of Marshall University), and you get yourself the combo business that is a Southern Company and Bittersweet Coffeehouse.

A Southern Company, a business that focuses on home decor and fashion, is the older of the two co-located businesses owned by Rita Pike-Evans at this warehouse near the Marshall University campus. While we weren't exactly seeking to improve our home decor being in the middle of vacation, there were plenty of nicer looking items at what seemed to be fairly reasonable prices. The space also holds a dining area, where the weekend brunch associated with the coffeehouse (more on this below) is hosted. 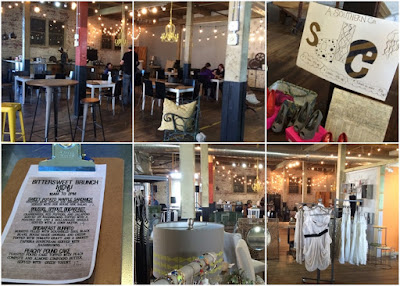 The newer addition to the tandem, Bittersweet Coffeehouse (opened in December 2014) showed that more sophisticated methods of brewing coffee, found quite readily in places like San Francisco and Columbus, are still percolating out to more remote parts of this country. As out-of-towners, our barista was more than happy and excited to explain what their coffee shop does different from any in the area in focusing on the pour over method of brewing coffee, as well as freshly grinding beans before preparation (a couple folks there, after realizing we were from the Columbus area, admitted to being fans of what the folks at One Line Coffee were doing.) 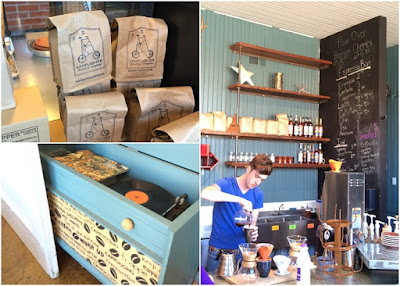 Bittersweet offers pour-over coffee as well as all the basic espresso preparations using beans sourced from Lamplighter Roasters out of Richmond, VA. Seeking something that was on the cold side, we both went with their Iced Lightning, a preparation not unlike Cafe Brioso's subtly sweet iced preparations like their Maple and Honey Vanilla Lattes that really hit the spot for both of us. Smoothies and juices are also available for the non-coffee drinkers.

In a neat twist for this former (and renewing) vinyl junkie,and similar to Columbus-area places like Rambling House and Fox in the Snow, this coffeehouse offers music via record player; while some records did seem to be evident, a note on the machine asks customers to bring in their own vinyl to be played.)  Also, the brunch menu, which seems to be on par in size with what Explorers Club offers at Zauber Brewing, can be ordered through coffeehouse personnel. Menu items rotate on a fairly regular basis: on this day, our options included a Breakfast Burrito (featuring house-made chorizo and smoked paprika sour cream, with a side of hashbrowns) and a Sweet Potato Waffle Sandwich (with apples, smoked Gruyere cheese, and a side salad.) 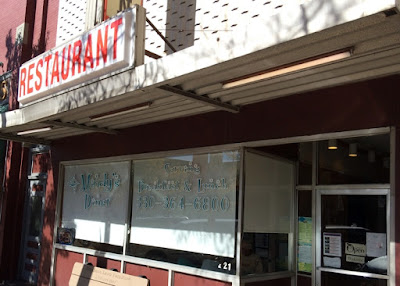 Mindy's Dover Station Diner - this was a case of previously-unknown-eatery coming to the rescue in the form of this Dover, Ohio downtown diner. Our preferred destinations ended up being closed on Sunday (Bread Head Bistro, also in Dover, and our backup, Rod's Donut Shop in Uhrichsville.) A third possible breakfast destination in New Philadelphia turned out to have a pasteleria on site instead. This is not generally not a bad thing at all, but in this case all this store had left on the shelves were the picked-over and, sadly, stale remnants from Saturday's offerings.

Downtown Dover was not exactly bustling as we were driving through looking for an opportunity to sate our hunger pangs, when a hint of activity led us to our salvation this morning. 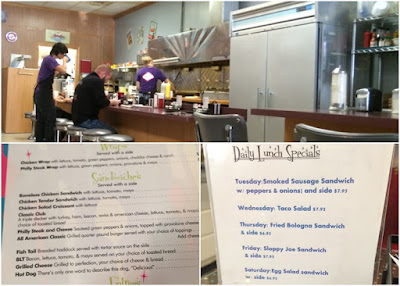 True to its designation, Mindy's formula is not terribly uncommon, offering a 1950s-themed atmosphere along with diner-styled favorites. In a small-town type touch, rotating daily lunch and Sunday specials are offered to the visitor.

In terms of a Columbus perspective, the food is similar in quality and price (e.g. inexpensive) to what you would find in places like the Beechwold Diner and McCarthy's Wildflower Cafe, both on Indianola Avenue.  My spouse ordered "Dave's Breakfast", a good version of the classic biscuits and sausage gravy, and I appreciated that a place like this had the build-it-yourself Omelets had jalapenos (and ones with actual kick to them) as an option. The side of thinly-sliced Home Fries we shared were a little bit limpy but otherwise seasoned well.  Our service was friendly and our orders came out without any inordinate delay. 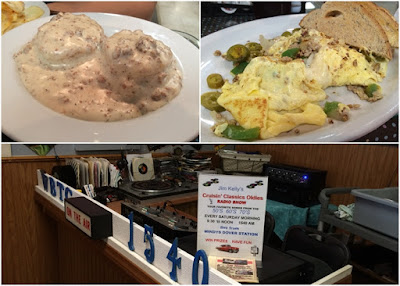 Mindy's also sports some interesting eye candy within its walls. In the back of the restaurant, a broadcasting booth can be found: the diner is home to a local radio station's "Cruisin Classic Oldies Music Show", hosted every Saturday by local radio personality Jim Kelly. In addition, vintage photos and furniture can be seen scattered throughout the interior, including a neat icebox sporting a logo from New Philadelphia-based Goshen Dairy. If we had noticed the sign on top of the icebox in time, we might have dived into one of the myriad of pie options, including Peach-Pineapple, Peanut Butter, and the highly intriguing (to me at least) Grape. Maybe next time...