During my long-distance dating phase with my current spouse, I was slowly but surely getting acquainted with the craft beers of what comprised the Columbus brewing scene at the time (for the most part, those were brews from Barley's, Columbus and Elevator.) I also grew familiar with some of the Ohio craft beer scene as a whole - for example, my first taste of Great Lakes Brewing's Edmund Fitzgerald Porter turned out to be my gateway in figuring out what my main preferred style of beer was. Lancaster's Rockmill Brewery helped open my taste buds to the farmhouse and saison styles of beer.

But there was another brewery's beers farther to the south in Athens that kept making regular appearances at family gatherings and beer-tastings. The unique art on the cans, a vessel that was not a common craft beer world item at the time, was fun and playful; and brews like Chomolungma, Mystic Mama and Razz Wheat were solid drinkers. Later on, bottles of their complex, right-up-my-alley porters and more heavyweight brews made my appreciation for craft beer grow that much more. And everything I heard or read from others about this southeast Ohio operation seemed to be almost universally positive.

Really, the only thing that was missing was a visit to the actual brewery itself, but we made sure that Jackie O's was on our itinerary our last couple drives into southeast Ohio.

Started in 2005 by owner Art Oestrike, what would become Jackie O's began with a takeover of a struggling brewpub (O'Hooley's Irish Pub) in the Union Street area of Athens just north of the Ohio University campus and began the process of producing their own beers with the assistance of head brewer Brad Clark. However, tragedy struck early in the process when Oestrike's mother was diagnosed with and tragically passed away from cancer. It was then when the brewpub's nomenclature became the familiar Jackie O's in tribute; other nods to her memory have been made with several of their brews, most notably their Mystic Mama IPA.

Since then, growth has been a constant at Jackie O's. In 2009, the brewery acquired the space next door to expand their kitchen and restaurant space, dubbing it The Public House (according to the brewery's website as of the writing of this blog post, The Public House's kitchen remains closed due to the November 2014 Union Street fire, but the bar space has reopened for music events and weekends.)

Jackie O's dark and brick-lined original space, which isn't the largest to begin with, can get cramped in general. Larger groups may also have to wait a bit for seating to open up. On the day of our visit, we were fairly lucky when our group of six (four adults and two kids) ended up nabbing a table in less than ten minutes. Other than the brick, wood dominates the interior both in the floors and tables; in fact, we noticed what appeared to be a neat-looking viking ship on the table we landed. 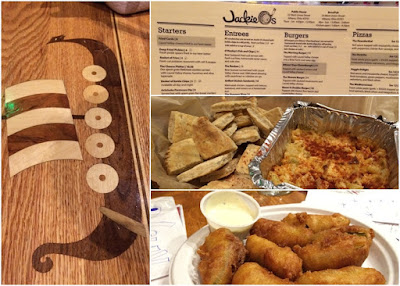 The downtown location has a full menu available of pub house favorites, but the loss of the Public House's kitchen has made food ordering here for now a bit of a controlled chaos exercise. Ordering is done at the bar, and finished dishes are placed on a table situated right next to the kitchen area (diners are notified via electronic pager.) We had heard great things about Jackie O's pizzas, which are prepared with their in-house spent grain crusts, but our hunger level was such that appetizers were the choice this day. Spent grain crackers and pita slices provided tasty dipping instruments and accompaniment for their cheese and hummus plate as well as the artichoke dip, while the fried pickled spears provided a neatly-battered, tangy counterpoint.

A couple years later, permission was granted for Jackie O's to use the old "cheese barn" building on Campbell Street to expand their production capacity. This facility opened up to the public the summer of 2013, and we also had the chance to drop by here on another recent visit to the area.

Located within stone's throw of the Hocking River on the east side of town, its not hard to see how this building had life prior as a cheese production facility. Unlike their downtown counterpart, space is more ample here, allowing for room for familiar bar staples like dart boards as well as outdoor patio space benches; indoor bar and table seating is also available. Also unlike their Union Street location, the food options are not as plentiful as a food cart provides a limited choice of small plate noshes. With that said, their nachos, made with Shagbark Seed & Mill corn tortilla chips topped with pork braised in our Brick Kiln barleywine, provided a delectable and filling pairing with our bigger ABV-beers we ordered at this location.

The beers we had at both locations did not fail to please. All the basics were available, but on both visits we were here to explore the more unique offerings. From their awesome Black Maple Bourbon Barrel Imperial Porter (a favorite for both of us) to their Wood Ya Honey (bourbon-barrel aged honey wheat wine) to novel one-offs like their Ground Cherry Berliner Weisse and their Chalmond Joy (Chomolungma brown ale with cacao nibs, vanilla, almonds and coconut), we got to thinking what took us so long to get down to this brewery (rated in the Top 100 Brewers in the World by ratebeer.com) in the first place.

Jackie O's Pub and Brewery is celebrating their 10th Anniversary this weekend, featuring unique brews, limited-edition swag, live music, and more. For more information on the event, please consult their event page on their Facebook feed.