Mead ranks as one of the, if not the oldest, alcoholic beverages known to man, dating back to at least 3000 BCE. Columbus residents are quite familiar with this ancient beverage if they are acquainted with the fine versions put out by the Short North's Brothers Drake, which was covered on this previous blog post.

Many people may not know that to a number of meaderies lie to the north of the Columbus metro area. In Ohio, you can find several to the northeast in the form of Meniru, Crafted and the Bottle House, and to the northwest you can cross the border into Michigan, which has just under 20 meaderies or breweries who also produce mead scattered through the state.. On a recent gathering with relatives, we made a journey up north to sample the meads of two of those producers. 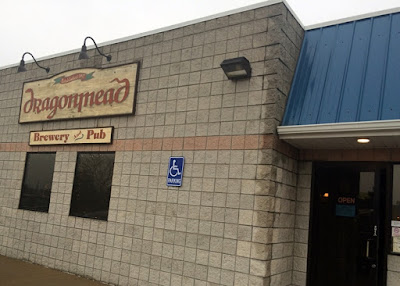 Dragonmead: This Warren-located microbrewery is to the Michigan state craft beer scene what a brewery like Elevator or Barley's is to Columbus' own. When auto industry veterans Bill Wrobel, Earl Scherbarth, and Larry Channell opened the then microbrewery in 1997, there were less than twenty such ventures in the state (per the Brewers Association, the state was home to just under 160 breweries as of 2014.) After maintaining 3-barrel-capacity microbrewery status for several years, the brewery expanded to a larger facility in 2014 with a new 20-barrel system.

As one might gather from the brewery's name, the interior sports a decidedly English pub/medieval theme, enhanced by the pub-like setup (the longish bar area is the first thing seen as you enter the space), wooden bench-style seating, and other scattered artwork and media along the walls. Beyond the bar area, plenty of additional seating is found as you go further into the space, and if you head to the bathroom area, you can peer inside the facility's production space. 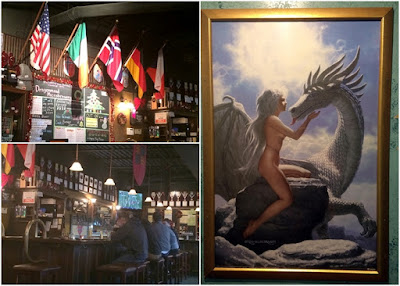 What one might not guess from the name is that mead is NOT the most prominent item on the alcoholic beverage menu. Dragonmead sports a large swath of brew; in fact, the five flags hanging above the brewery specials chalkboard depict the five countries (United States, Germany, Belgium, England and Norway) whose styles of beers are available for the beer drinker. All-in-all, there are roughly 40 taps of Dragonmead's beer to choose from, meaning the more local you are to this brewery, the more likely you'll be able to sample the brews and find the gems. While we were here mainly for the mead, our group did sample a few brews and we found the English-styled beers we tried to be quite traditional and overall credible efforts. 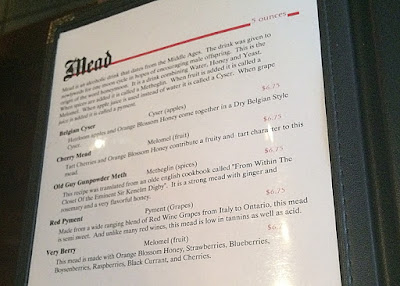 Of course, we were all here to try their mead, and Dragonmead had five listed on their menu. Our group tapped out their Cherry Mead (well-liked by all), which was replaced on tap by a fairly unique Banana version. After a slight bit of wariness, we found their banana mead to be a pleasantly and even surprisingly tasty. But by far our favorite mead of the bunch was the Old Guy Gunpowder Meth, whose unique flavor combination centered on ginger, rosemary and a "very flavorful honey" (to quote the menu) and was savored by all. 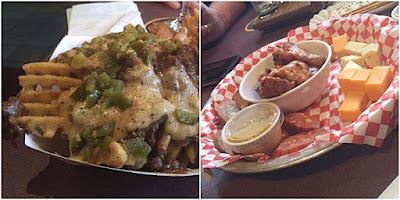 Dragonmead offers (no surprise) pub-styled favorites, centered around loaded waffle fries and BBQ flatbread pizza variations flanked by a variety of appetizers. The variety of items ordered (the Loaded Waffle Fries, with chopped bacon, bacon beer cheese, sour cream and green onions, was particularly tasty and filling, not unlike something you can order Columbus-based food truck Tatoheads) provided more than adequate gustatory accompaniment and appetite satiation for the group. 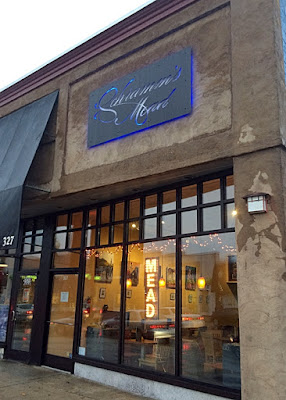 Schramm's: My homebrewer brother-in-law, who has cranked out some tasty meads in the past, warned our group that Schramm's held within its walls a deadly lass in the form of their Black Agnes. He warned that one sip of this black currant mead, named after the lady (Agnes Randolf) who successfully defended a Scottish castle from a several-months siege by the Earl of Salisbury, could potentially ruin any future mead experiences, it was that good.

This Ferndale business is the baby of renowned mead maker Ken Schramm. Schramm, the author of all things mead making in The Compleat Meadmaker) has made a stellar reputation for himself and his meads since he started learning to be a homebrewer in 1987.  According to a website Eat It Detroit, Schramm noticed the appendix section of his primary resource at the time (Charlie Papazian's The Complete Joy of Homebrewing) highly extolling the virtues of this ancient beverage.

Suffice it to say, Schramm has not looked back, helping start a mead-only competition in the Mazer Cup and authoring the previously mentioned book, which still remains the primary tome for anyone venturing into this field. His company now grows their own fruits and has had years to perfect their choices of honey, spice and other mead ingredients for both their standard and seasonal varietals.

To be honest, my first glance at Schramm's location (opened in 2013) in a modern-styled strip mall in downtown Ferndale seemed a little odd (the general feel of this section of town reminded me a bit of Uptown Westerville, or perhaps even Rockridge in the San Francisco Bay Area.) However, the interior was nicely attired yet simple, pretty much along the line of your typical small-scale wine tasting room. Along with the bar area, a smattering of tables and stylish art prints dot the textured yellow-beige walls within the interior. 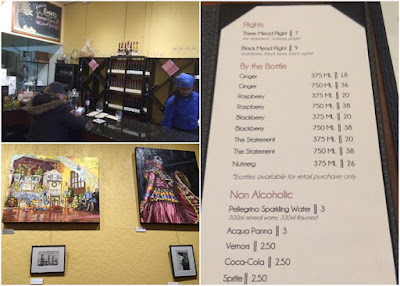 As one gathers quickly, Schramm's meads are on the pricey side, and you figure they better be top of the line if you're going to be paying $8 to $24 for a 5-ounce glass and not surprising when the most sought after varietals go for around $100 or more per the bottle. Thankfully, Schramm's gives visitors a relatively inexpensive way to sample their offerings with two different three-mead flights, and we were quite happy to find that the Black Agnes was included in the slightly more expensive "Black" varietal sampler.

My spouse and I went opted for these flights first, but my brother-in-law's experience with and description of their mead convinced pretty much everyone else to go straight for the gusto immediately with a glass of the Black Agnes itself.

While the Black Agnes did not spoil my future mead tasting experiences (I and my spouse especially do enjoy drier meads), I must say that if you are into complex but sweet, extremely fruit-forward flavor profile, this mead may do just that very thing. Unlike meads I have had before, the honey was more of a luxuriant framework for the hugely fruit-forward rich currant flavor. It reminded me a bit of a port wine, but unlike a port (a wine I do not care for), this was a sweet profile I could enjoy, albeit over an extended period of time. Everyone in our group was impressed to varying high degrees with the Black Agnes, with one of literally in tears from the deliciousness she had just tasted.

In truth, all the mead we tasted from Schramm's were all quite worthy. The creations with the "black" fruits have gained the higher reputations overall, but even their more non-fruit-based mead creations like their nutmeg and ginger were quite good. Any mead maker would be proud to put these under their own label.  Swept up by the delightful brews we were drinking, my spouse and I shared one more glass of their quite enjoyable seasonal Apple Crisp cyser.

On the food side of things, Schramm's has a concise menu of fancier small plate type dishes. While these items are not gut-fillers by any stretch, the selection of appetizers, sandwiches, salads and desserts offer visitors a way to provide a food/mead pairing to their liking, Our waitperson showed he was more than capable in terms of suggesting menu items (we ended up with perfectly palatable grilled cheese sandwiches accompanied by a small side salad) as well as describing the available mead varietals themselves.