What do you get in Ohio when you blend together fancified, customizable tacos, a good selection of adult beverages, and a restaurant space splashed liberally with Day of the Dead-styled motifs and similar decor?

You get restaurants like Cleveland's Barrio and Columbus' Condado. 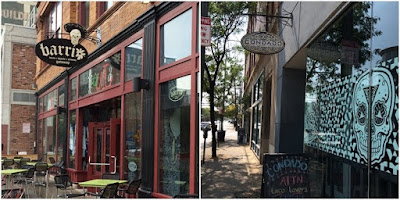 The common denominator with these two kissing cousin eateries lies in one Joe Kahn. Kahn started up Cleveland's Barrio in 2012 in the Tremont neighborhood; its ncreasing popularity prompted a second Lakewood location in 2013. As it turned out, Kahn wouldn't be much longer for the Cleveland market after its opening, as he sold the rights to these restaurants to his partners with the intent of bringing the concept down to the Columbus area.

Since Kahn's departure, Barrio has since continued to grow, opening a third location at the 5th Street Arcades in the Gateway area of downtown right around (appropriately enough) Cinco de Mayo of 2014. Two-and-a-half hours southward on I-71, Kahn's Columbus-based Condado was setting up shop in the Short North, already the home of a very well-received and similarly fancy taco and adult beverage oriented Bakersfield.. Kahn opened the doors to Condado just over one year ago in November of 2014.

My first visit of these two eateries took place at Barrio at their newest downtown location. Sporting an outdoor patio area (perfect for casual dining in the warmer months) and a main dining area with a centralized bar area, it was evident that this eatery is a natural draw for some post-work libations for area workers: a steady flow of patrons filtered in after I took my seat at the bar area. Interior decor was dominated here by spiky-star light fixtures and a Day of the Dead mariachi band mural.

In contrast, Condado's interior decor is a bit more varied: what seemed to be a town fiesta mural dominated one side of the room, while the rest of the room was dotted with tilework, animal and human masks and skulls, and a large "Tacos Delicioso" sign. Here, the bar lies to the rear of the space; individual and longer bench-style tables, the latter featuring some neat swing-out stool seats, dominate the central area of the space.

Along with atmospheres geared for socializing, both places are equipped with adult beverage choices to help loosen diners' tongues. Margarita and tequila options as well as a good selection of craft beer on tap are available at both locations, with several handles devoted to local Ohio-breweries.

Like many similar restaurants, its easy to gorge too much on the pre-menu chips and salsa, and these are generally fairly addicting renditions. I also got the chance to try the basic guacamole at Barrio, which is both a notch better than most and a fairly large helping for the price paid.

Obviously, tacos are the main way to go at either of these eateries (though Barrio in Cleveland does now offer a brunch with a couple of non-taco items), and I imagine your decision will really be influenced with how hard you want to think. Both places offer both build-them-yourself or pre-designed varieties which they dub "Taco Suggestions."  With my first visit being to Barrio, I was dead set on mastering the make-it-yourself system, which is done with Scantron-like forms to mark off tortilla types, toppings and proteins.

Though taco trucks are definitely my preferred source for tacos, I do like the opportunity to experiment with the multiplicity of options at both these eateries. In reality though, you as the diner are at least partially to blame if your combo doesn't quite work out taste-wise. Perhaps the best (and only) way to figure out what works long-term is through multiple visits and narrowing down what's truly appealing and what's merely ancillary.

In contrast, with my chances of dropping of Condado on any given day being a lot greater, I wanted to test out some of their items on their "Taco Suggestions" menu for future "don't want to think about it too hard" days. The pork-based "Poncho's Ghost" (a hard shell with pulled pork, red cabbage, onions and tomatoes, cheese and ghost pepper sauce) was the clearn winner from my batch of tacos, cementing my feeling from Barrio that the pork and flavorful ghost pepper sauce (despite the scary sound, this sauce's heat level is toned down a bit at both locations) are go-to items in future visits. 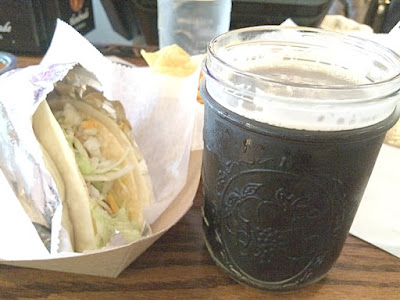 In terms of other proteins, the chicken featured in tacos at both locations (at Condado, the chicken came with the Herve Villechaize, a soft shell taco featuring lettuce, onions, tomatoes, smoked cheddar, pineapple salsa and habanero mango BBQ sauce) was just a touch dry on its own but otherwise well-grilled. The story was similar with Barrio's chorizo: it sported less kick than I might have liked, but it was otherwise perfectly tasty.

The only quibble I have with Condado's vegetarian El Posada (featuring a flour shell, tofu, chipotle honey, jicama, queso fresco, salsa roja and pineapple salsa) was not so much with the taste (I appreciate that this option is on the menu; Barrio sports a similar item in their Saturday Night Live punnily-named "Curd Ferguson") but the size of the tofu. With the slippery interior, the tofu tended to come out whole from inside before I could bite through these big pieces. Perhaps I'll just have to try to master the art of eating tofu in a tortilla the next visit out, or maybe take a knife to cut those cubes to a more manageable size next time around.