One of the first items I noted in my mental notebook as I was learning about the Columbus area was a theater in along an avenue named Indianola (at that time, I was still quite unfamiliar with street names and where they ran in the metro area, and this fairly unique street name caught my eye.) I noticed that the theater offered what seemed to be a pretty good selection of craft beer along with a movie. I knew that a few of the modern multiplex theaters in the Bay Area had started to venture into that realm, so I asked my spouse about it. She confirmed that the beer selection was indeed quite nice, but added that despite driving by the theater many times, she had never seen a movie there.

We made it a point to drop by one night to check it out, and found there was a lot more to Studio 35 than just a mere beer and a flick. So much more, in fact, that it has become one of our most favorite local destinations.

The first thing you notice about this Clintonville neighborhood landmark, at 77-years-old the oldest independent movie theater in the area, is the red marquee towering over the simple but tasteful white exterior of this single-screen theater. Venture closer to the entrance and you'll notice the ticket window. We found out on this and later visits that this booth is almost exclusively occupied not by an actual human but rather a Hollywood themed figure. Vampire? Zombie? Minion? They've probably stood watch in this booth at one time or another. Of course, we had not realized this fact during our first visit, but we eventually got the hint from other arrivals that we just needed to walk inside the double doors.

As you come inside, guests will notice the pièce de résistance, if you will, right away. Studio 35's bar area, which acts as the theater's lobby by default, is the center hub for numerous activities including buying tickets (or checking in if you pre-purchased them) and grabbing some adult beverages (more on this later) This area, along with much the theater's interior, was renovated to its current spiffy appearance back in 2012. TV screens ring the area as well as the bar seating; additional tables and seats for larger groups of people lie off to either side of the space.

Food is also available as well. Along with staples like popcorn, pretzels and candy (a note suggests that the M&M's are the perfect thing to dump into and enjoy with those fluffy kernels), a menu of selections from just-down-the-block Pizza Primo can also be ordered. This pairing works quite well: pay for your order at the bar, get an estimated time of arrival on your order, and come back at the appointed time to find your freshly cooked-up grub. Pizza Primo probably won't win any "best of" awards with their assortment of pizza, calzones and related items, but their food provides more than adequate grub to nosh on along with your beer and movie.

Also within the lobby area, one can get a gander of some of the most clever and creative movie-themed posters. Save maybe for the outside poster displays, Studio 35 does not rely on the Hollywood studio produced promo posters generally speaking, and this is to the credit of theater co-owners/husband and wife pairing Eric Brembeck and wife Rita Volpi. These media pieces, which I heard were the fruits of some fairly extensive searching on the Internet, caught my eye on our first trip in and remain a must see for me on return visits. 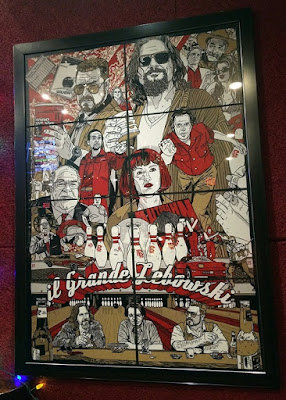 Those who order food to go with their movie have a nice option within the main seating area of this single-screen theater (a smaller second-screen in the upstairs portion of the building is currently in the works) - several of the rear rows sport tables, perfect vehicles to place your pizza boxes, popcorn containers or pint glasses, among other items. Similar to the lobby area, the main seating area was redone to cut the number of seats in half in return for a more comfortable viewing experience.

Aside from the first-run movies, Studio 35 is the home for numerous other crowd pleasing big screen viewings, some of which are completely free admission. From broadcasts of sporting events to the recent political debates, Bad Movie Nite to midnight showings of the Rocky Horror Picture Show, the Summer Kids Movie series and special beer tasting and movie pairings, it's hard not to find something you would enjoy watching on the big screen here.

The special beer tasting and movie pairings especially provide a unique way for the craft beer aficionado to sample a plethora of beer styles or brewery offerings in one setting. As previously referenced, Studio 35 offers adult beverages with your movie experience, including one of the better brew selections in the metro area at their bar. Certain pairings of movies and beer have become popular annual events, including the "Dude-A-Thon" pairing featuring cult classic "The Big Lebowski" with a selection of beer (the popularity of this event has led to three events next January, which at the time of typing of this blog post all officially sold out.)

Additionally, beers that are hard-to-get or not readily available to the general public are occasionally available during these events. For example, the annual pairing of the movie "Major League" and Great Lakes Brewing out of Cleveland, gives Columbus-area beer drinkers a chance to have a taste of the typically Cleveland-only distributed Rally Drum Red Ale, produced only for the start of baseball season. Another movie pairing will treat you to variations on Columbus Brewing Company's popular Bodhi Double IPA. To cite a recent example, the just-held "A Christmas Story"/Christmas-themed beer pairing featured a cask version of Bell's much beloved Two Hearted Ale. Mix in brief humor-based clips on the big screen between pourings as well as plenty of swag giveaways, and you're pretty much guaranteed to be in a good mood once the actual movie starts up.

Even with Studio 35's recent renovation and current popularity, the fact remains that the single-screen theater will always be swimming upstream finance-wise versus the omnipresent big box multi-screen competitors. The just approved second screen will help maintain the theater's main money pipeline in the form of first-run movies; in addition, a similar business model is being developed at the old Grandview Theater in Grandview Heights (opening date is tentatively scheduled there for spring of 2016.)  We can only hope that these developments ensure that this staple Clintonville institution won't be running the end credits on its operations anytime in the foreseeable future.