Return to California (aka The More Things Change...)

Our return to California this year to visit my home of some three decades revealed some inescapable trends that I've noticed in the last few visits. In terms of this blog, the Bay Area and California in general has really transformed in my mind into much more tourist destination than a former home. I experienced a bit of this feeling driving through San Francisco last year, but this year it became even more prominent.

Familiar landmarks were now gone (most prominently the grandstands of the horse racing facility of the Solano County Fairgrounds), businesses I grew up with were now closed (like Country Creamery, which never had the best ice cream but made up for it by charging a buck per scoop), and the ongoing development of the Springs area just outside of Sonoma. Even the still familiar, as in the Seafood City pictured above, sported some changes, including the closing of a store in which we bought our first Christmas parol. 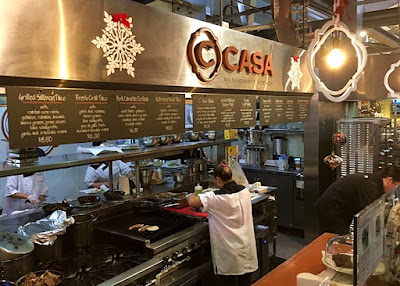 Another change resided in a familiar destination for both of us in Napa's Oxbow Public Market. Something of a more compact and more modern-era version of Columbus's North Market. C Casa wasn't unfamiliar to us - their healthy and decidedly California take on tacos and other Mexican dishes plus rotisserie meats has held a spot at the market since 2010, but this was our first chance for a lunch time meal. Not surprisingly, that focus hadn't changed based on their menu and posted special - why change what's worked, right? 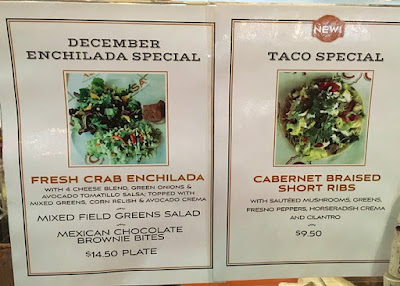 Considering California prices and the ingredient quality of C Casa (grass-fed beef, free-range poultry and sustainable produce are prime directives), one might expect the portions to be somewhat modest, but that was not an issue here.  Neither was the taste of my Nachos Not! (featuring chorizo, mix of black and white beans*, pico de gallo, goat cheese & chipotle aioli) and my spouse's Spinach, Corn and Edamame (with optional protein addition, in our case rotisserie chicken), which were both quite delicious and satisfying. 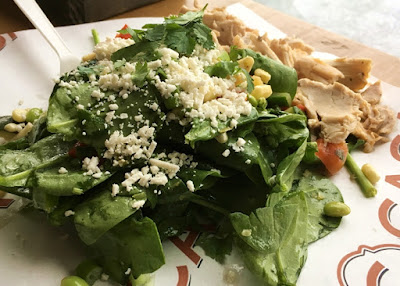 Pairing these up at other end of the market with some of the easier-drinking brews from the new-to-us taproom of Fieldwork Brewing (a brewery which will soon sport six locations throughout Northern California and whose original Berkeley space we visited in 2016) made for a really nice lunch experience.

Fieldwork's presence at Oxbow Market signals another change for this area: Napa as craft beer destination. Fieldwork along with four other breweries (including big dog Stone Brewing) have joined longtime area brewpub Downtown Joe's to give those more enamored of hops and malted barley a reason to visit a city known worldwide for its wine. 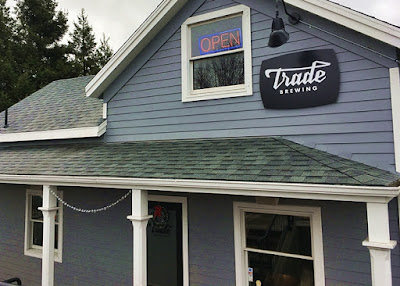 As we found out, Trade Brewing offers up nanobrews and a low-key gathering spot in a relatively compact space (for Columbus, Sideswipe Brewing and Zaftig's original space come to mind), with some nice goodwill building options like a chalkboard where you can "Beer-It-Forward" to a future customer. Interestingly enough, it seemed like we were at an Ohio-area taproom, as we noticed programming from Fox Sports Ohio playing off to a television to our side. 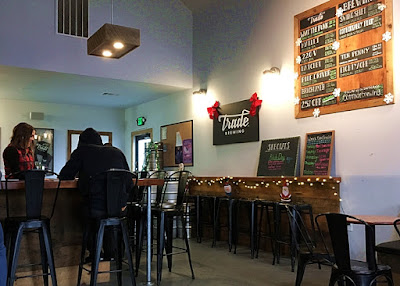 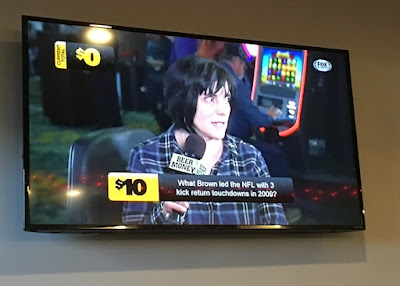 While the beers here generally follow working trade terms (220 V, Swing Shift, Bricklayer, etc.), the two we tried did not follow that pattern - What The Funk, a nicely tart and funky BA farmhouse ale, and the nicely drinkable Comfortably Plum, a wheat ale with a pleasant plum finish.  It was here where we saw the staff at Trade was paying attention, and in a good way: after we were halfway through our beers, the gal handling the taps asked us how we liked them, and then suggested that a cuvee of the two beers was even better than the individual brews, and asked if we would like to give it a try. 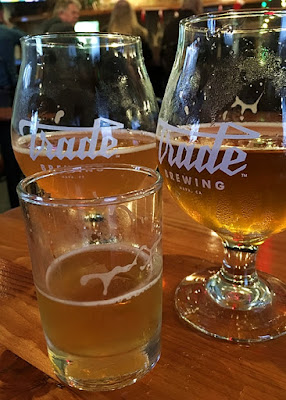 Who are we to say no, and yes indeed, the two brews combined proved to be wonderfully balanced. It was a brief encounter, but so far, this Trade has proved to be a good one for both of us, and it's one we wouldn't mind plying again in the future.