While it may not have originated with them specifically, the modern practice of glamping (camping without the rough edges) can trace its lineage to folks like the Hearst Family. As it turned out, the hill near San Simeon where the Hearst Castle now resides was a favorite warmer weather destination for George Hearst (who purchased 40,000 acres of ranch land in the area around the time of the Civil War; the acreage eventually grew over sixfold) and his family.

With many of the rough edges taken away (their campsite was prepared months ahead of time), George’s children, including future media magnate/politician/art collector/eventual inheritor William Randolph Hearst, were allowed to roam the land relatively freely. This fostered a love of the area in William that eventually led to the stately grandeur that embodies Hearst Castle, which we both got to visit for the first time. 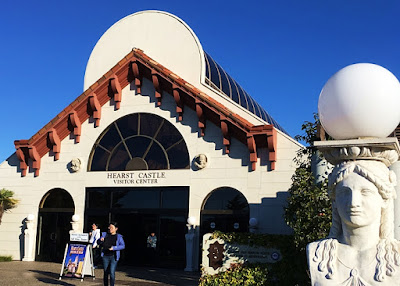 Now run by the California State Parks system, access to the property is typically arranged via booking a tour. All tours (several options are available) start from the Visitors Center, which lies several miles from the Castle itself. 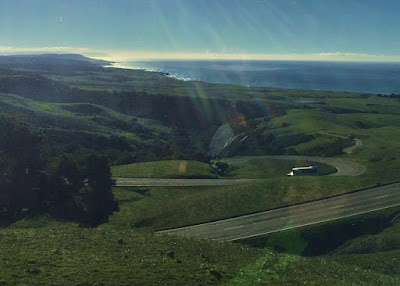 The winding journey to the castle (roughly ten miles round trip from the Visitors Center) lends clues to how isolated yet spectacular this property is. Wildlife roaming the hills contrasts with trees not normally found at cooler, windswept climes like citrus and palm trees; on clear days, the blue hue of the Pacific shimmers in the distance. As you venture closer to the house, the remains of a walkway that led to the zoo area peeks through behind the foliage, while the other side the ever growing monolith of Hearst Castle itself as your tour trolley wends you carefully up the narrow roadway. 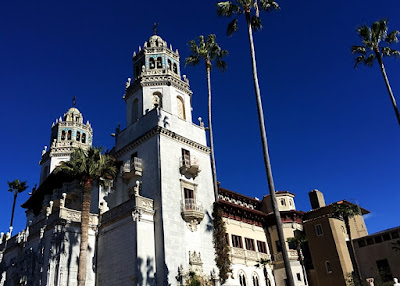 Numerous tours are available for visitors; as we booked just a little later than ideal, we ended up on the Upstairs Suites tour. On this tour, we found out that the spectacular nature of the Castle proved to be a two-part equation, as out tour guide pointed out in detail. Julia Morgan, a ground breaker for women in many ways in the field of architecture and engineering (she was the first female accepted in the prestigious École des Beaux-Arts School in Paris) impressed Hearst greatly with both her stylistic flair and structural sturdiness in her buildings (her Bay Area located Mills College Bell Tower and library in Oakland survived the devastating 1906 San Francisco earthquake unscathed.) 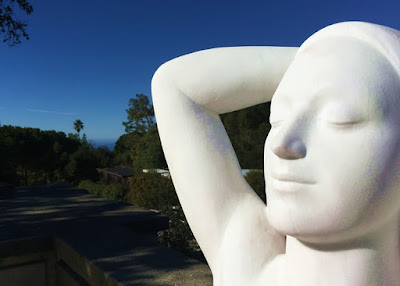 For nearly three decades starting in 1919, Morgan not only played a key role in the design of Hearst Castle and Hearst’s other properties, but also managed the important job of integrating the numerous works of art and architectural elements that Hearst acquired from all corners of the world. Interestingly though perhaps unsurprisingly, Morgan never got to complete Hearst’s vision, despite the property’s eventual composition of 165 rooms and over 120 acres of gardens, terraces and other estate elements, due to Hearst’s declining health and his departure from the estate in 1947. 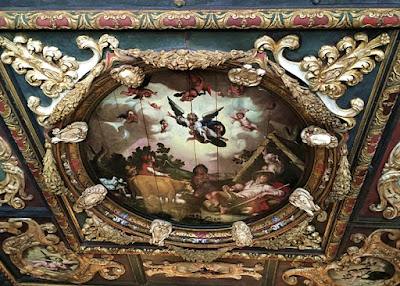 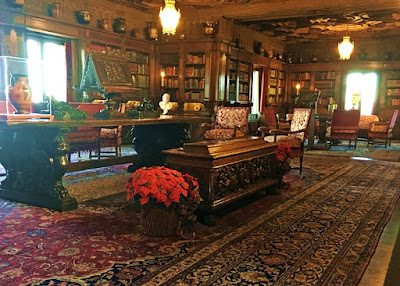 Morgan’s work was prominently featured in these guests suites, with our guide enhancing the spectacular nature of what we were seeing by revealing the little hidden details (like the use of drapes to hide the non-artistic but necessary support walls.) We also received a detailed picture of what those invited to the mansion could expect both in traveling to the mansion (the journey for many, involving a lot of train travel was a bit more arduous than now) as well as what they could expect at arrival and during their stay (including but not exclusive to guest quarters, rules of the house, and social events.)

While not as glamorous a topic, the logistics in how the house came to be proved fascinating as well, as exampled by how the Hearst family ended up getting water to the mansion (in this case, it proved to be a matter of a reservoir in the nearby mountains and getting gravity to do the work.) 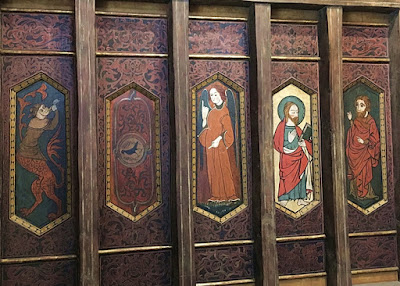 The story of Hearst himself has been told in numerous books and other media sources. We ourselves knew the general story, so the more intimate details provided by our guide of how Hearst himself viewed the estate as well as how he treated the family (especially his interactions with Morgan, his wife Millicent, and his confidante/estate hostess Marion Davies) and guests he hosted were enlightening. Also intriguing was some of the tales from guests themselves, including Ralph Bellamy’s experiences with the on site zoo animals and then First Lady Myra Coolidge’s experience with a malfunctioning elevator. 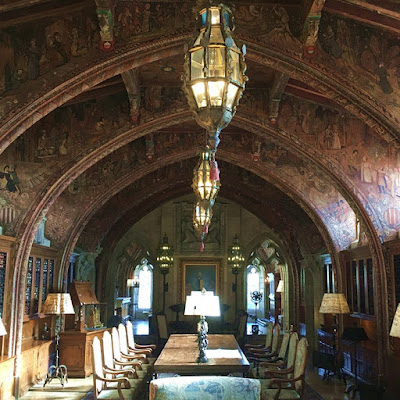 The tour itself included some of Mr. Hearst’s most private rooms, including his Gothic Suite (a room which even his sons were forbidden from without a personal invite) as well as the Hearst family bedrooms. But we discovered that the more “lowly” of suites were guaranteed gorgeous views of either the Pacific Ocean or the Santa Lucia Mountains inland. 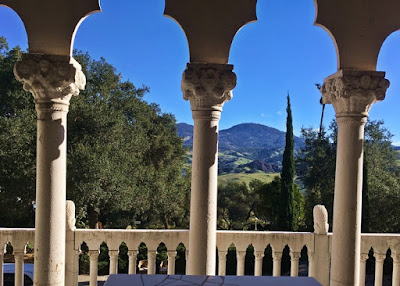 Post-tour, visitors are free to roam the grounds outside, which are teeming with numerous citrus and palm trees, random artifacts and marble sculptures, and sheer opulence. Perhaps the ultimate example of the latter was the Neptune Pool, a feature whose access was recently restored to visitors and filled you with the urge to jump right in (that action, of course, would probably be met with a quick and premature exit from the premises.) 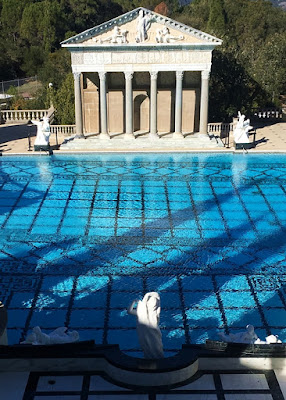 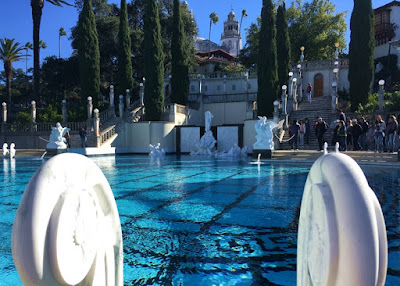 Or one might lean toward the indoor Roman Pool which started this post, which our tour guide said might be the fanciest bus depot in the world nowadays. Lined with marble tile and 24-karat fused gold inlay, this pool would probably be the preferred choice for a swim, at least on this breezy and fairly chilly (by California standards) kind of day. 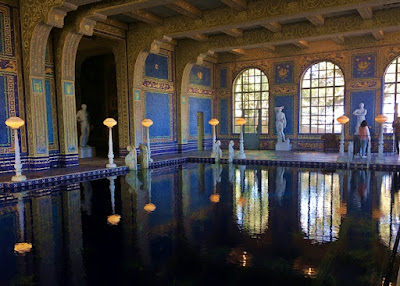 If you’re into visiting historic and/or extravagant houses, Hearst Castle would definitely be up your alley. While its extravagance can be equaled by other such places we’ve visited (most notably, The Biltmore Estate in Asheville, NC, the Castle’s surroundings relatively untouched hillsides and a spectacular view of the Pacific Ocean add a backdrop that both rivals and enhances the property itself.

Hearst Castle is open every day of the year except New Year's Day, Thanksgiving, and Christmas. Tours do tend to sell out fast during the high season, so reservations for tours (tours can be reserved up to 60 days in advance) are recommended for those times.