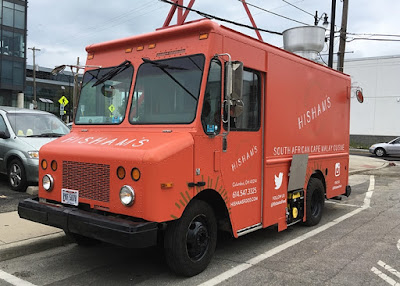 As I have come to learn, Cape Malay cuisine, found in the western portions of South Africa, got its start when Dutch settlers brought in slaves from Indonesia, Malaysia and East Africa into the area during the 17th and 18th centuries. Their culinary heritages eventually blended and fused with the existing local traditions, leading to a melange of curries, stews, and other dishes that lean more toward complexity versus fiery heat.

It is this tradition from which Hisham (who grew up with the cuisine in South Africa) and his wife Olivia offer up to the Columbus public at large. Of course, having a unique cuisine to a region is one thing, but making them both accessible and delicious is a whole different matter. Based on my initial samplings, Hisham's has done just that. 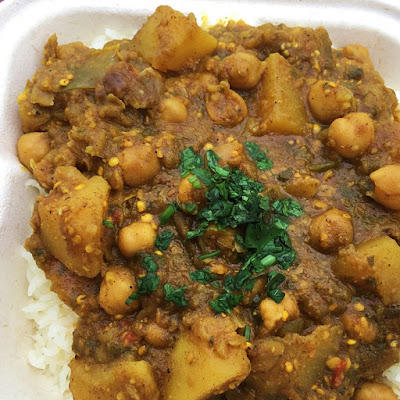 Multi-layered flavor profiles aren't usually associated with food truck fare, but that's what Hisham's provides with all their offerings. As I initially reported on Instagram, their Veggie Curry fit firmly in that complex but not heat-laden profile that defines Cape Malay dishes. I admitted then I didn't know the general spice profile of the cuisine and generally prefer a little more zing, but I came to realize this dish really didn't need it. In fact, too much mouth-burning heat would detract from the subtle interplay of the herb and spices in this dish. 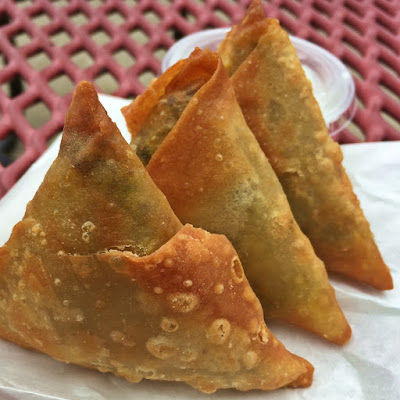 The Malay Samoosas were a dream - their crispy-textured exteriors and combo of herbs and spices in the meat filling made me realize that while I have really never had a bad samosa from anywhere, Hisham's version ranked a notch above almost any others I've tried before. 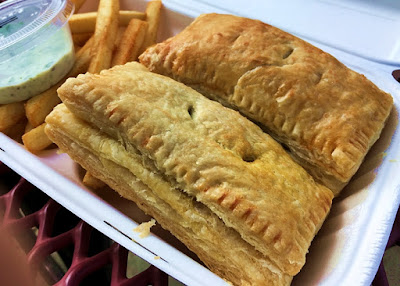 I admit I thought I might have hit their best items on my first visit when I next tried their hand pies, but I was turned out to be deliciously wrong.  A wonderfully flaky crust in both sight and texture (I actually scooped up the bits that had flaked off in my tray in my palm and flipped them in my mouth at the end of my meal), the fillings were also both quite lovely with the veggie filling (which featured a little more zing than its curry counterpart I thought) edging out the beef filling in this case (chicken is also available as a hand pie filling as well as a curry option.)

A side of yogurt sauce (which comes in hot and mild) forms is a worthy addition.  The "hot" version isn't really hot in a burn your mouth way, but it does throw in little welcomed oomph to the proceedings. A salad is also available as a side to any dish as well. 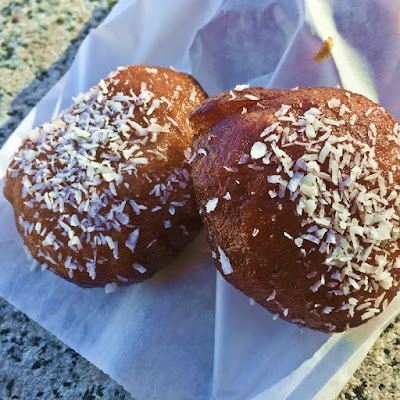 Last but not least, I tested out a batch of their Koeksisters (a South African-styled donut) and once again, you get something that's not a one-note affair. A little more toothier in texture than its American cousin, the sweet side is definitely there, but you get plenty of notes of things like cinnamon and cardamom to balance it out as well as a welcome touch of crunch from the flaked coconut. I was thinking as I was eating these how would awesome these would be fresh and warm topped off with a scoop of melting ice cream.