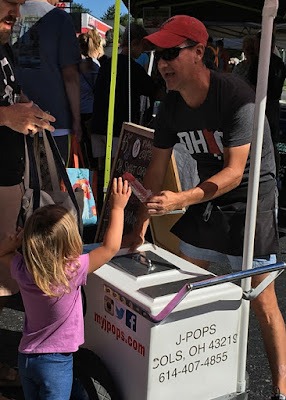 J-Pops Ice Pops - J-Pops is one of these businesses, like Buckeye Donuts previously, where I'm a little surprised I haven't written a specific post on yet. While there are now a few gourmet ice pop makers in the metro, the sight of the J-Pops cart at any special event or farmers market has become a welcome sight on any trip, along with many kids and/or kids at heart.

Steven White had never intended to turn ice pops into a business, but circumstances that put him in both Atlanta (home of ice pop businesses like King of Pops and Steel City Pops) and Japan (where White had spent time as a teacher; his production of his first batches of ice pops were made to assist with 2011 tsunami recovery efforts) brought him to his current position as the O.G. (or is that O.P.?) of the local ice pop scene.

The flavors are generally all seasonal with occasional specialty flavors (like the Chocolate-coated Strawberry), but several familiars have emerged as most popular (out of those, Lemon Basil and Pineapple Mango are favorites of ours).  But no matter what flavors may be on hand, you're all but certain to find something you'll truly enjoy. 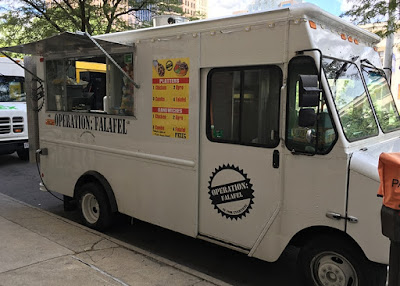 Operation Falafel (New York Gyro) - Falafel is one of those things that's easy to do in an average way. The spicing could be great, but the texture might be too grainy or crumbly. On the other hand, a falafel can be fried up nicely crispy on the exterior, but a bland interior makes it just another meal.

The plain decor for food truck for Operation Falafel interestingly struck me as both promising and prime for disappointment at the same time. The menu is just as simple: get your falafel, or other proteins like chicken, gyro or (on this day) Philly Cheesesteak in either platter or sandwich form.  I figured I'd be game to try those other proteins in the future, but on this first visit, I figured I oughta' try the item that your food truck is based on. 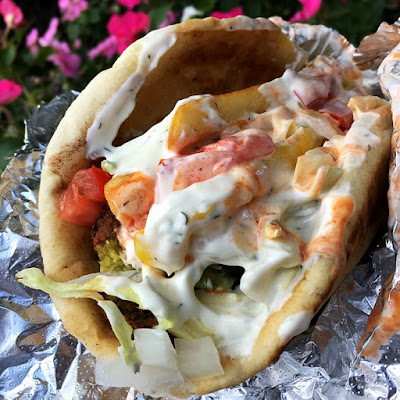 As it turned out, my falafel sandwich turned out to be one of the best I've had in awhile.  The falafel balls were perfectly fried up with a great crispy exterior and a good herb and spice blend inside.  I thought the sandwich might be over-sauced, but I turned out to be happily wrong, and the french fries added inside were a nice extra bonus too. I'm crossing my fingers that my next sandwich from them acts as confirmation of this first sampling. 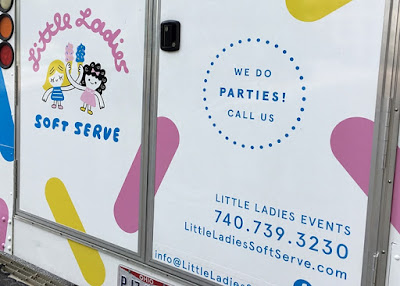 Little Ladies Soft Serve: On the opposite side of the decor spectrum, the food truck for Little Ladies Soft Serve is as fun and whimsical as Operation Falafel's is simple. Brightly colorful sprinkles dot the sides of this truck as if the truck itself were one big cubic-shaped glob of soft serve ice cream (cue Homer Simpson mode - ooh, big cubic-shaped glob of soft-serve ice cream on wheels that can drive to me - mmmmm.) 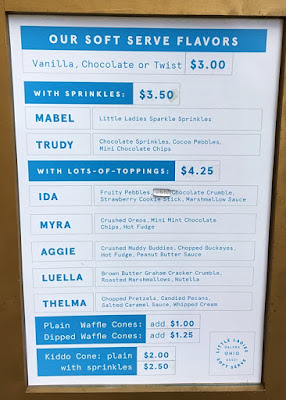 Indeed, "With Sprinkles" are an option, along with the "Lots-of-Toppings" variations, each of them dubbed with a female name. Basic soft-serve (vanilla, chocolate, or twist) is also available in either a bowl, or on "kiddo" cone or waffle cones. 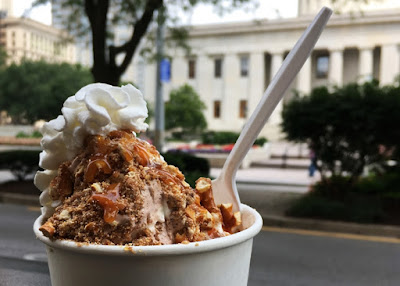 As it turned out, their soft serve ice cream fell into my general guideline for frozen yogurt - when I'm adding all sorts of toppings, I prefer a base that doesn't get in the way, and Little Ladies' pleasantly flavored soft-serve does that perfectly.  The twist provided a lovely soft base for my Thelma, with its appealing mix of chopped pretzels, salted caramel sauce, candied pecans, and whipped cream. 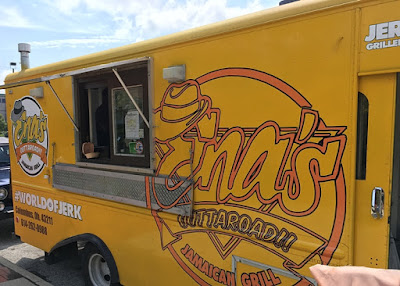 Ena's Outtaroad!! Jamaican Grill -  Compared to many of its protein counterparts, chicken often doesn't do as well with the grill. One noticeable exception to me lies in one of my favorite dishes in Jamaican Jerk Chicken, and the Ena's Outtaroad!! food truck does a mighty fine job of it.

Yes, they have Jerk Shrimp and Callaloo (a vegetable stew) along with their chicken, which also can be made into taco form. They even have that Jerk Chicken available on a sandwich on a pretzel bun with Caribbean Slaw, melted cheese and pico de gallo.

As it turns out, Ena's is one of those exceptions in my eating journeys - the Jerk Chicken on its own has been the only main I've ordered here, and I'll be perfectly happy if that remains the case. Paired up with some appealing sides (Red Beans and Rice, the previously mentioned slaw and, on my last meal, some perfectly fried up Plantains), their jerk chicken, both tender and nicely spicy-hot (but not too spicy), makes lunch a very pleasurable experience. 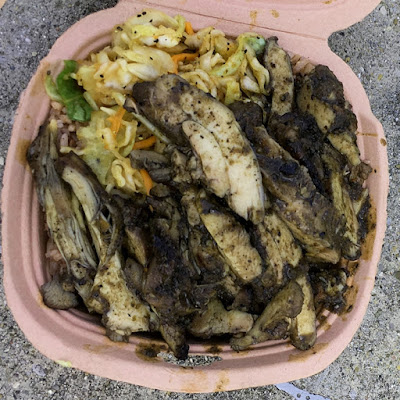