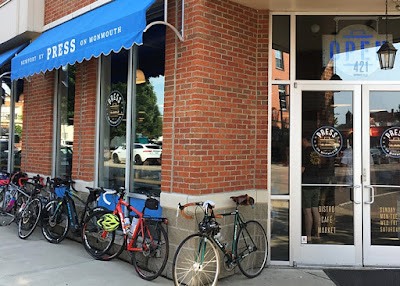 But of course, going brewery hopping on an empty stomach is quite ill-advised, so our first stop this day was for breakfast at Press on Monmouth in Newport, KY. 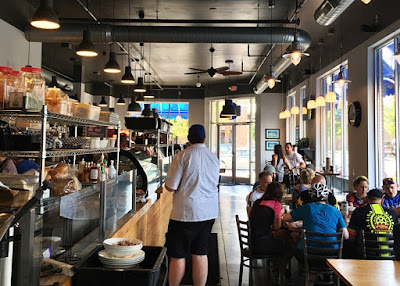 In terms of similar eateries we've been to, Press on Monmouth is something along the lines of Upper Arlington's South of Lane or even Brewhemia in Cedar Rapids, IA.  All three are all popular with the locals, all all three add some twists to the usual assortment of craft coffee and cafe-style menu items. In PoM's case, Waffle Tots, Quinoa and Rice Bowls, and a few craft beer drafts fit that bill here. 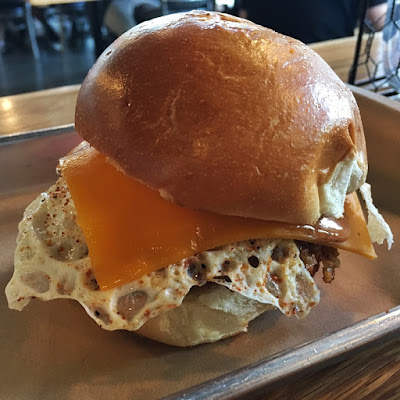 The Goettafest earlier in our trip had me goetta-focused, and I went with the Breakfast Sandwich with a slab of this new item of intrigue for me.  For me, the goetta was a little lost in the shuffle of large brioche bun, over easy egg, tomato and cheddar cheese, but other than that very tiny quibble the sandwich was pretty tasty.

Another very tiny quibble occurred with my spouse's Avocado Toast - we thought it would be better if the cheddar cheese that came with this blend of avocado, pico de gallo, chipotle and egg was melted (maybe they forgot?), but again, it was fine as is.  Add in some nice coffee drinks brewed with Cincinnati's La Terza Roasters, and we were prepped for the day.

It didn't seem right to cruise any breweries on US 50 without stopping at the brewery which drew its inspiration from the road itself. 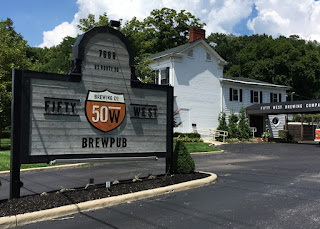 Opening its doors in November 2012, Fifty West Brewery originally setup in an old speakeasy right on US 50 and, like its bigger counterparts, found quite a bit of success early on. This led to a revamp of their production facility across the road; completed in 2016, this not only added more brewing capacity but also brought in a distinctive outdoor-oriented element, with volleyball courts, bicycle rentals, and river canoeing and kayaking when they brought the Mariemont Livery under their umbrella. 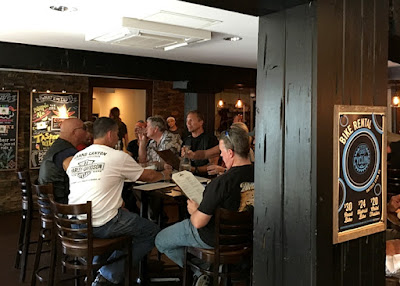 For us, the original brewpub was our chosen stop on this trip. The interior reminded me of a cozy, slightly cramped wooden mountain chalet, with low-slung ceilings, wooden beams, large-sized prints of various points along US 50, and reminders of all the outdoor fun that could be had across the highway at their production facility. 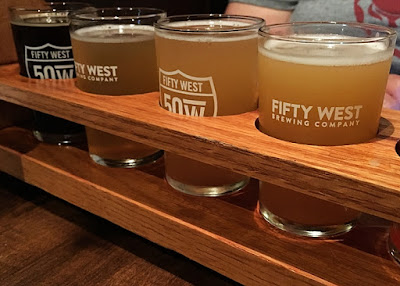 With brews and brews only on our mind, my spouse decided to grab a flight and I grabbed a snifter of their GABF-award winning Going Plaid Scotch Ale.  That Scotch as well as the hoppy ales in the flight were uniformly good, but these beers (and frankly everything else we had that week) were blown away by the brewery's Bourbon Barrel Aged Quad, which definitely ranks as one of the best beers we've had this year period.

Farther up the highway (but not really all that far), we encountered the lesson very familiar in real estate circles that roughly goes "location, location, location."  But instead of house hunting, we found it applied to the brewing world in the form of Milford's Little Miami Brewery. 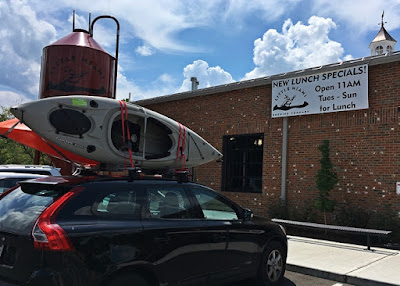 Opened by brothers-in-law Joe Brenner and Dan Lynch, Little Miami opened its doors to the public in December of 2017. Inside, the place has that neighborhood-oriented feel not unlike some of our favorites in the Columbus area such as Pickerington's Combustion Brewing or Clintonville's Lineage Brewing. Unlike those breweries, this space was not a renovation but rather a build-from-scratch to be a brewery space, with a tap area, a kitchen space specializing in pizza, and enough additional room to host live music performances. 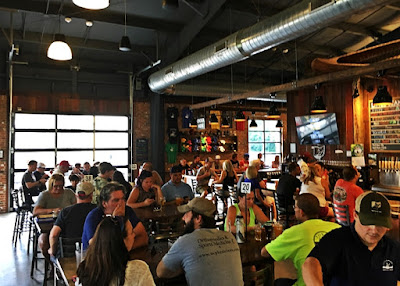 As appealing as the indoor space is, the back of the brewpub reveals the "location, location" appeal of the brewery.  Along with an tented outdoor patio and picnic-style benches, a line of Adirondack-style chairs gives you prime viewing of the Little Miami River, which flows right by the brewery just to the west. 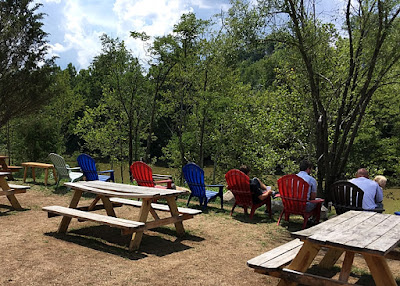 It's a great place to soak up some sun and watch the folks in canoes and kayaks paddle down the Little Miami River.  And between this brewery and Fifty West farther downstream, it seems those who want to put in a good day of paddling on the river can reward themselves with a couple nice cold ones along with some grub, if the weather and the planning go as desired. 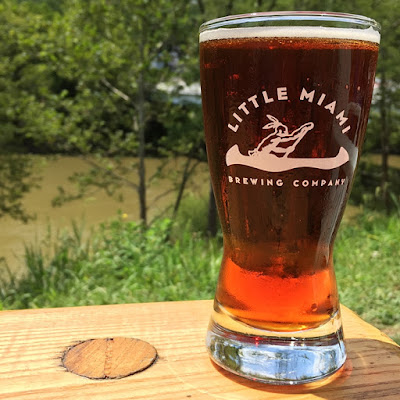