Final Sweep Across The Plains: Three For The Road

Not unlike any of our previous excursions to far away places, we end up covering a lot of ground in a short time. Perhaps it's making up for lost time, and perhaps it's just the way we roll, but nevertheless we encounter a lot of places and destinations that are definitely worth your consideration should you be in the area. We close out our grand Great American Eclipse vacation journey with a blog post about three eateries that fit that definition to a tee.


Brewhemia: Along with nearby Czech Village, Cedar Rapids' New Bohemia (NewBo to the locals) neighborhood has been the focal point of the city's regrowth since the devastating 2008 flood on the Cedar River. As noted in an article in The Gazette, the neighborhood, home of the popular Newbo City Market, the African American Museum of Iowa, and numerous other businesses has seen a jump in property valuation from $29 million to $46 million since the year of the flood. One of those businesses benefiting from the area's popularity is the Brewhemia Coffee Shop. 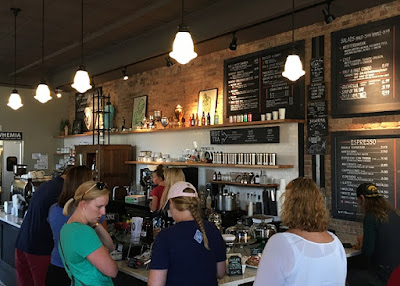 This family-owned cafe, which was re-branded and updated in 2014 when the current ownership took over, keeps quality coffee at the forefront, but melds it with breakfast and lunch service early in the day, with a change of focus to craft beer and drinks and appetizers in the afternoon hours.  For the Columbus native, it's a bit of a blend of two downtown coffee purveyors in the Gay Street location of Cafe Brioso and the lone remaining MoJoe Lounge on South High St. 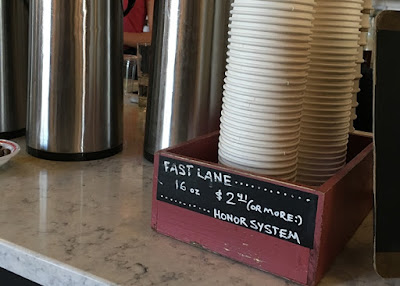 A unique aspect we found here was the so-called "Fast Lane", a coffee express lane where people can serve themselves a cup of coffee for $2.41 (or more) from various hot pots. 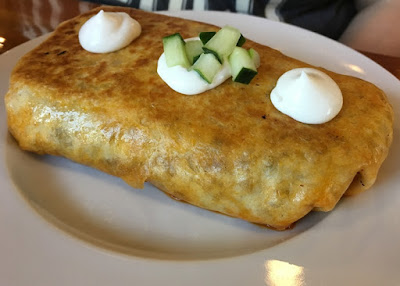 If nothing else, we could tell they weren't sourcing standard issue meats with our breakfast creations. The trademark bright orange grease was more than present in my spouse's Breakfast Burrito with chorizo, and my Sausage and Egg sandwich reminded me of the sausage they served at SoHud's Baba's, with perhaps just a tiny bit more spice kick. Our espresso-based coffee drinks were also satisfying, from my spouse's Horchata Latte (which reminded us of the one we got at San Antonio's Barrio Barista) and their The Bohemian, a drink combining cold press coffee, vanilla and milk, a slightly less sweet version of the Joe Cool that Columbus' Cup O' Joe serves up. 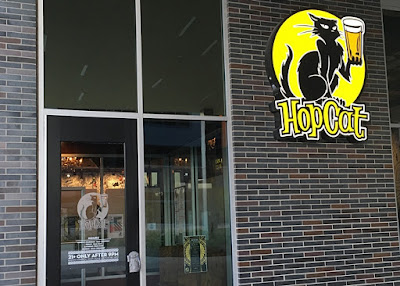 HopCat: If you believed the stories in some press outlets, Columbus was one of many potential expansion cities of the docket of Grand Rapids, MI-based craft beer restaurant HopCat. As of the date of this blog post, however, that ebony feline, pint glass wielding logo is nowhere to be found yet within city limits.

My spouse had previously visited the original HopCat location the past and really enjoyed herself, and when we discovered that there was one on the way back home in Lincoln, NE, we decided to stop by to check out a place where expansion has become a reality. 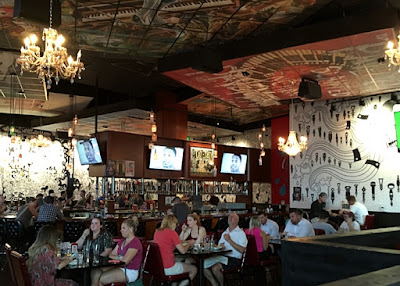 Located on the western edge of downtown not too far from the University of Nebraska campus, this version of HopCat is quite different from its Grand Rapids counterpart. Unlike the cozier, British pub like feel of the latter, the Lincoln HopCat sports a fairly voluminous interior, with visually arresting black & white wall murals (at least one of which is by San Francisco artist Lauren Asta) anchored by a large bar seating area.

Overhead, representations of various rock album covers hover underneath the high ceilings. I'm not sure of the logic behind what album covers made it overhead. Suffice it to say, album covers from The Beatles, Elton John and The Rolling Stones would be surprising if they weren't up there, while others like Pavement, Frank Zappa and the Grateful Dead were unexpectedly pleasant sightings. 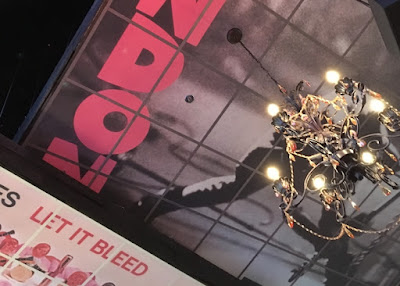 HopCat's base concept isn't too unlike local Columbus eateries like 101 Beer Kitchen and The Pint Room in Dublin, except in this eatery's case (to borrow a "This is Spinal Tap" reference) it's turned up to 11, or maybe 10.5. The tap list is fairly extensive, with a mix of national and local Nebraska beers, with plenty of volume to cause selections to tap out (as a couple brews did during our visit.) 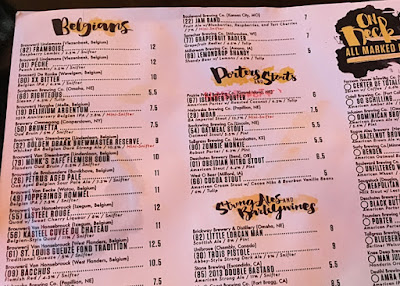 Meanwhile, the menu isn't too much unlike most pub menus, filled mainly with gut-filling creations with a focus on their so-called "Crack Fries", which has been put in the Top 10 French Fries in America by Food Network Magazine. Yes, they were good, but I dare (and maybe even surprised to say) that their Muffin Top Chipotle Black Bean Burger (served on an English muffin with tomatoes, red peppers, spinach, blue cheese, spinach & house-made stone ground mustard) was even better than those vaunted fries. Their French Onion Soup is also pretty tasty, though the portion size seemed a bit paltry for the price we paid. 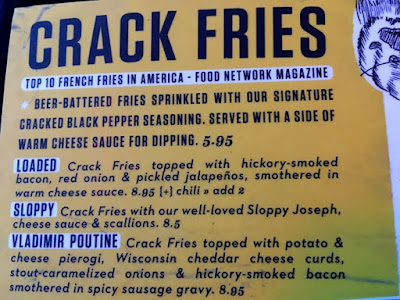 Monk's Ale House of Ill Repute/Gandy Dancer Brew Works: Sioux Falls provided a quick stopover point during our Midwest travels, but it did give us a chance to take a brief break from our hectic travels when we stopped by for late night brews and 'za and this city institution. 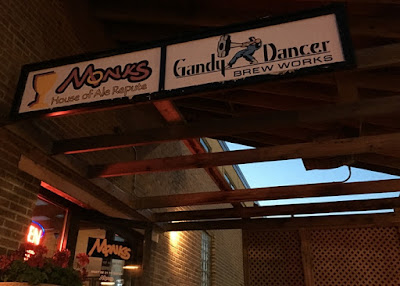 Opened up in 2007 by Jerry Hauck in a space that formerly sold furniture close to the Big Sioux River, Monks House distinguishes itself as the first craft beer tap house in this town of nearly 175,000 people. The in-house nano-brewery Gandy Dancer opened up roughly six years later in 2013 when a group of regular visitors to Monks reached an agreement to brew their own beer within the premises. 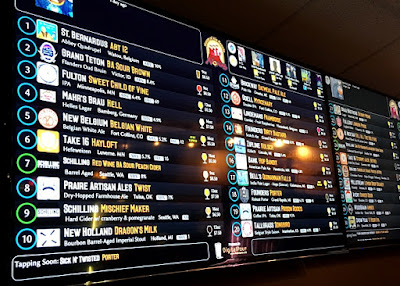 Whether you try out the in-house brews (both our Gandy Dancer pints rated in the solid category) or not, Monks House has plenty of craft taps as well indoor and outdoor seating to handle visitors 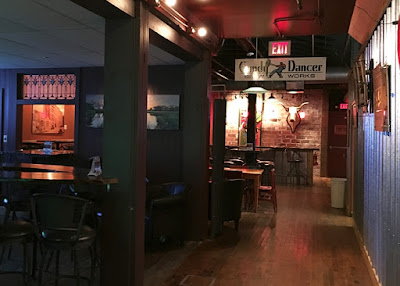 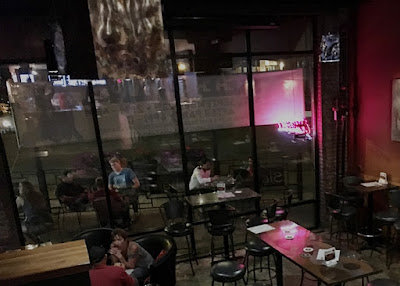 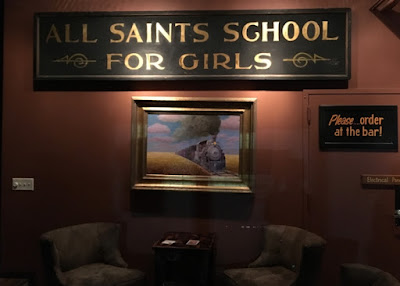 The house menu is centered mainly around pizza along with a smattering of sandwiches and sides. While our Sausage Pesto pizza with an assortment of toppings was fine (it reminded us of the Columbus' tavern thin-crust style with a bit of a more airy crust), it was an appetizer that won our hearts in the form of perfectly fried up Green Bean Fries with some ranch dressing dip. 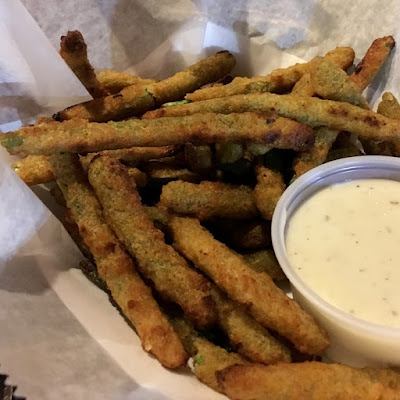 On this night, those seated outside were treated to pleasantly warm temperatures as well as a lovely lightning display off on the horizon. No matter what the weather, however, I suspect the folks who work at Monks House know deep down what brings the people in. 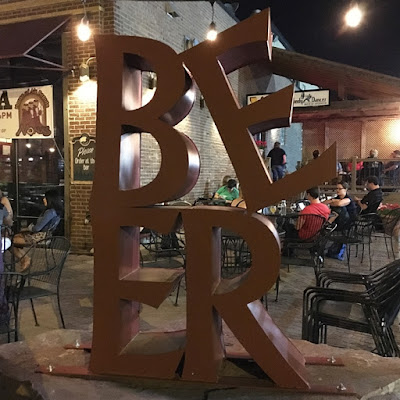