An "I" on the Old School: A Platter of Midwest Dining 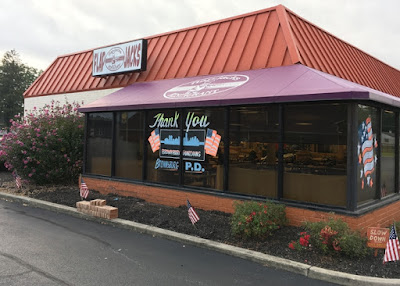 Flap-Jacks: I think every small town in the Midwest has a place like Flap Jacks. Located northwest of Indianapolis in downtown Brownsburg, this diner-styled-food mini-chain (four locations throughout the Indy area)  has all the trappings of small town America, with plenty of good old red, white, and blue, an appreciation to local law enforcement and the military, and support of sports teams both local and regional. This eatery is a definite hangout for the locals. 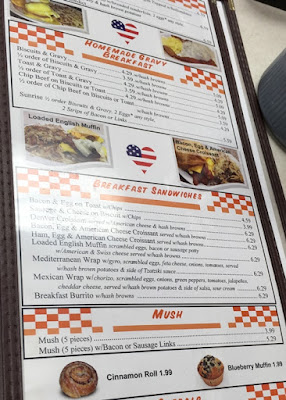 We were here for a relatively inexpensive meal that would stick to our ribs for some a longer day of excursioning than normal due to the time zone change and Flap Jacks didn't disappoint here. The menu had plenty of plenty gut-fillers, including a whole section dedicated to their homemade gravy-based items, tons of egg-based creations, as well as the Indiana tradition Mush, fried cornbread squares available in 5 piece segments, or with your choice of bacon or sausage. 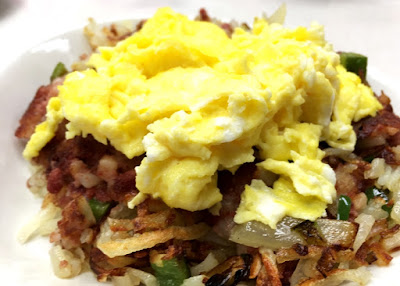 In my case, the Corned Beef in the Hash may not have been from scratch, but it was cooked the way my Dad used to, with plenty of crispy bits to provide textural contrasts. Meanwhile, my spouse was happy with her Potato Pancakes and Applesauce.  We had considered the IHOP closer to our hotel, but were glad we decided to venture to the local instead. 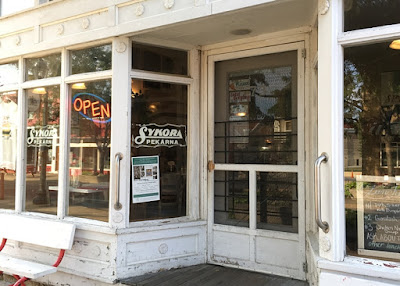 Sykora Bakery: Residing in the historic Czech Village area of Cedar Rapids, IA, the building which Sykora Bakery resides in dates back to the turn of the 20th century, with the building's namesake, Jose Sykora, purchasing the building in 1927.

If you weren't convinced of the this business' Czech heritage and pride walking up to the entrance, you will be once you walk inside, not only with the food menu (with kolaches, goulash and pierogis among the choices), but also with the memorabilia inside, much of it related to various celebrations and community events throughout the year. 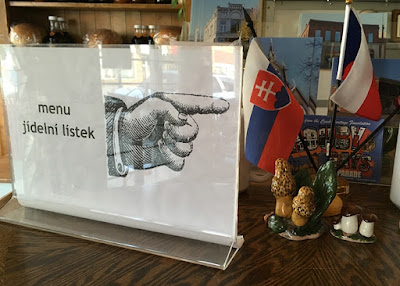 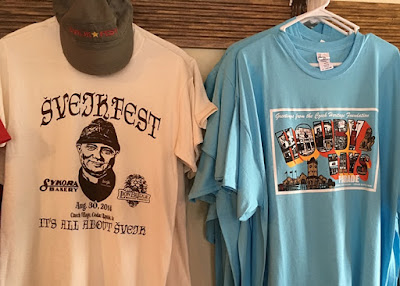 We were here for the kolaches, but sadly we had arrived too early for the fresh ones this day. We decided to grab a couple of those for the road and they turned out to be fine road snacks, sporting an airier texture than their Texas (or Columbus, as in Kolache Republic) cousins and lovely, from-scratch fruit fillings. 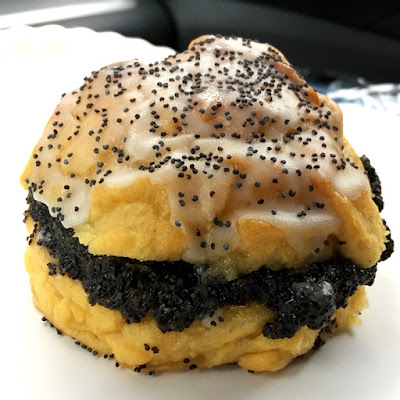 Even better was their so-called "Bohemian Burger", a sliced sweet roll bracketing an fairly substantial layer of poppy seeds.  Unlike many places, this poppy seed filling was not adorned with any extra sweetness, making for an intense taste experience. After consuming this treat, we laughed we were very happy not to be undergoing any drug testing in the near future. 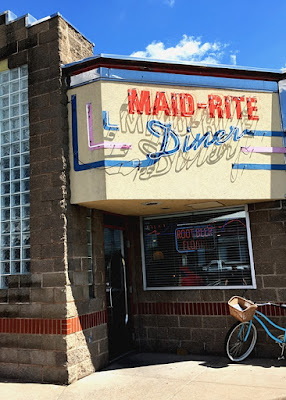 Maid-Rite: The recent "Regional Sandwich" series by my fellow blogger CMH Gourmand had me inspired to sample at least one such example on this road trip.  The Gourmand had said that since we were aiming to view the eclipse in Nebraska, the runza sandwich (a bread pocket filled with beef, cabbage or sauerkraut, onions, and seasoning) seemed like easiest target.

As it turned out, Nebraska was filled mainly with campfire and home cooking: while we were actually quite appreciative of the change of pace, this meant that for the most part Runza was not to be had.  However, we found a perfect opportunity to dive in in our third "I" state on this trip in the form of Maid-Rite in Milan, IL. 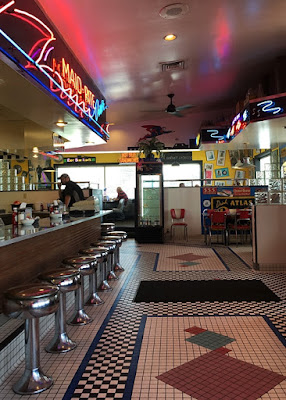 As it turned out, we ended up a lot closer on the first part of a road trip to the original home of Maid Rite than we were even thinking at the time. Born in 1926 in Muscatine, IA, Maid-Rite was established by butcher-by-trade Fred Angell, whose special seasoned ground beef (or as they came to be known, loose meat) sandwiches became a regional hit, with the restaurant offering 30+ locations in six states. 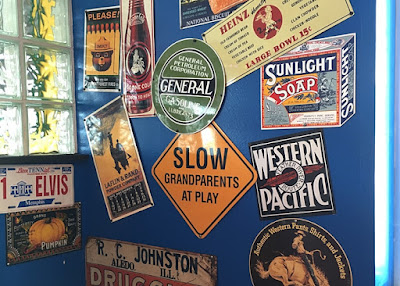 We didn't quite know what to expect, but the true diner atmosphere of the Milan location, with the old advertising signs and neon lights, and classic diner bar seating, provided a nice visual and mental break from the drudgery of the freeway. 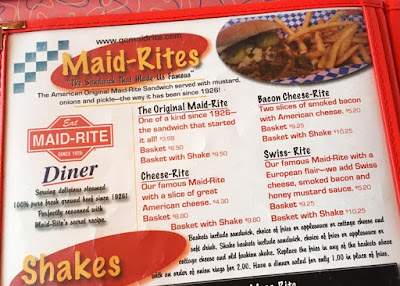 The menu had some what looked to be tantalizing special options such as an the Chili Size Maid-Rite (an open faced Maid-Rite covered with chili) and Texas Toast Maid-Rite (Texas Toast covered with the Maid-Rite ground beef, fries and cheddar cheese sauce), but we figured we ought to do the original first, with the only difference my spouse's preference of a slice of cheese with hers. 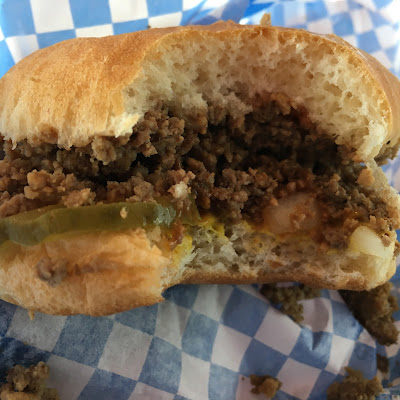 My dad had a concoction that he simply called "Ground Beef" - it was a stewed ground beef with tomatoes, onions, and cubed potatoes that we would just scoop onto white rice. For me, the basic Maid-Rite is that dish, tweaked into sandwich form, and with the potatoes as fries (which were nicely salty without any visible salt crystals in the basket.  Even more fun was at the end, when the ground beef bits were intermingled with the bottom feeder fries.  That's where the spoon which comes with the basket comes in very handy, making for a fun finish for a pretty unique meal.

It also got me to thinking that a romp up I-75 someday to sample the Maid-Rite in Greenville, OH (there is also one in Piqua, but the Greenville one appears to be the more cooler building) followed a visit to the lone Clancy's in Sidney and then a Kewpee in Lima would be one heckuva' nostalgic burger romp.  My aging arteries might not appreciate it, but there's no harm in imagining it, right?