It's always nice to have some well-placed friends: every Christmas season, we looked forward to a visit from a long-time friend of my wife who lived out in Minnesota for the holidays. Aside from the very good company, we looked forward to her presents of some highly sought after regional brews with cult-like followings in Wisconsin's New Glarus and Minnesota's Surly Brewing.

On our recent vacation travels, we tried but couldn't make Wisconsin work with our timeline; however, we calculated a quick jaunt through Minnesota would be more than doable. With that determined, we figured a visit to Surly Brewing was a definite must-do. 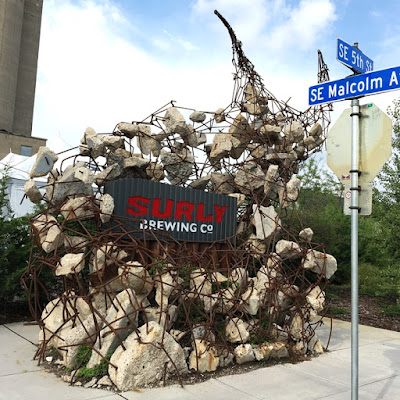 Our visit to Surly's impressive 100,000 barrel brewery/beer hall (opened in 2014) in a decidedly industrial section of Minneapolis' Prospect Park neighborhood, came at a time of perhaps continuing and, to some, surprising flux in the brewery's operations. In November 2016, head of brewing operations Todd Haug, who along with Omar Ansari brought the brewery to the heights it holds now and was key in shaping its unique image, announced his resignation (ostensibly a mutually agreeable one, according to all parties) to join forces with another brewery with a strong cult-like following in Indiana's 3 Floyds.

Most recently, brewery officials announced that their Brewers Table restaurant, which featured an elevated beer and food pairing concept and received high praise and recognition in the culinary world, would close in August, just two weeks before our intended day of visit. With the closure of the Brewers Table, highly acclaimed chef Jose Guzman also departed from Surly. 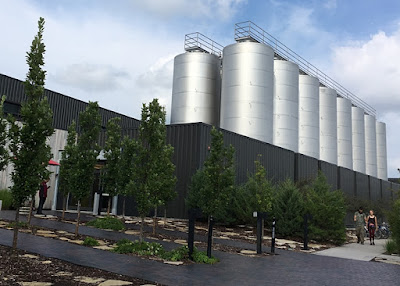 We were wondering if we might sense any of this flux as we walked in to enjoy or a brew or two, and as it turned out, the answer was no, not really. Outside, preparations were being made for a weekend concert at the brewery, and slowly but surely, folks from all around filtered in just like any Friday happy hour kind of day.

The interior of the facility (a former potato processing plant) is a sleek and modern industrial two-story affair, with just enough wood paneling touches to balance out the grays and black tones. Glass panels allowed a look at the brewing equipment, while a sunshine-laden courtyard could be seen just to the left side of the interior tap area. 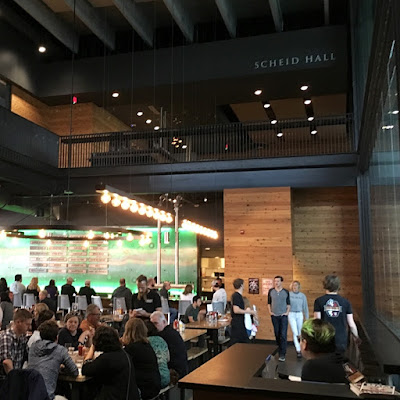 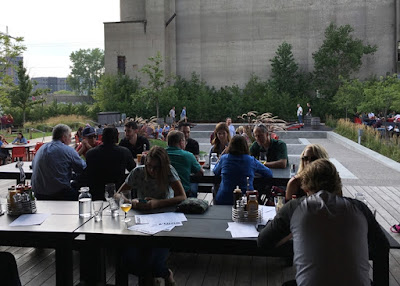 While the outdoor courtyard isn't the most fancy you might find, the decidedly industrial surroundings (including a towering grain elevator) actually made the outdoor courtyard feel like an oasis of sorts, with ample landscaping, plenty of chairs, tables and benches, and cornhole boards. We just got the feeling this would be a great spot to hang out and sip a few brews on just about any tolerable-weather day.

It's also setup for getting in casual conversations with neighboring parties, as we did when we overheard them talking about a Mothman-like creature in Wisconsin and we shared our experiences with the West Virginia version back from 2015. 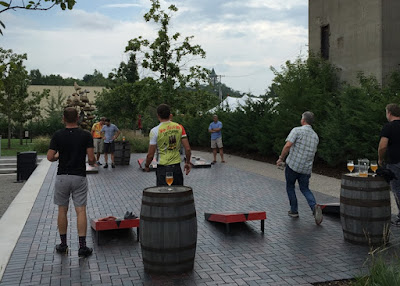 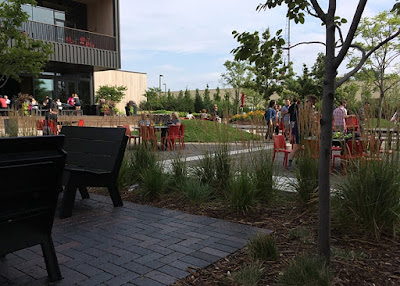 Surly's current menu still reflects some of the more higher end touches of its discontinued Brewers Table concept, with items like Naseem's Hot Chaat (featuring chickpeas, garam masala, and cumin tortilla chips) and Hog Frites (smoked meat with pepper jack fondue and giardinera) sharing the spotlight with more familiar brewpub items like charcuterie plates and pretzels. However, on this day we arrived fairly sated from Czech pastries we had procured earlier from Cedar Rapids' Sykora Bakery, so it would be just the beer and beer alone on this visit. 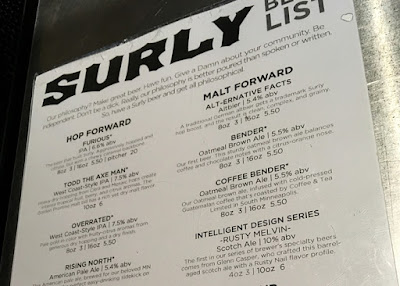 Surly's beer list includes all the flagship beers that gained the brewery its reputation (including its Furious and Todd the Axe Man IPAs and Bender/Coffee Bender Oatmeal Brown Ales), but we were here to sample the stuff that we figured wouldn't likely come in a muling run from our well-positioned colleague.

The beers we tried here, from their unique 11 Series (consisting of a Belgian Quad, a Brett-fermented German Wheat Beer, and a blend of the two, all brewed in honor of their 11th anniversary), to their Rusty Melvin (a Scotch Ale meant to mimic a Rusty Nail cocktail taste) to the our favorite this afternoon, the Barrel-Aged Pentagram (their flagship sour ale aged in High West rye barrels), were all delicious and enjoyable, making us wish we had a couple more hours to have a few more brews and (as the beer list references) "get all philosophical."

But we are traveling fools indeed, and there were still destinations to be had on this day. 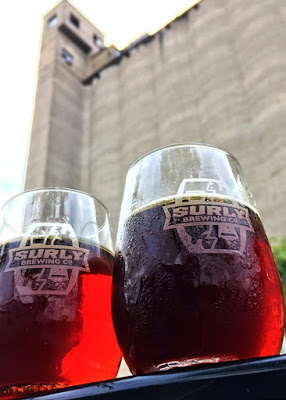