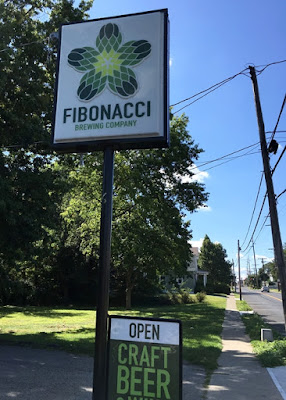 Cholera - most people in the USA today may recognize it these days in the title of a novel turned into movie by Colombian author Gabriel Garcia Marquez. However it wasn't too long ago when this malady was an issue here in this country. The quaint Cincinnati suburb of Mt. Healthy (roughly 6,000 residents these days) earned its name due to cholera, or rather, the ability of town residents to largely avoid the ravages of the intestinal infection (typically caused by poor sanitation) unlike the residents of Cincy proper. Because of this rather handy little happenstance, the town renamed itself from Mt. Pleasant to Mt. Healthy when it incorporated as a city in 1893.

Mt. Healthy may also not be the first place one thinks of for craft brews and mathematical equations, but indeed one can find it here in one place in the form of Fibonacci Brewing, which was the second stop on our recent venture down to the Cincinnati area.
Fibonacci was a natural name to give to their brewing enterprise for Bob and Betty Bollas (a software engineer and farmer, respectively), as the Fibonacci Sequence has applications in nature, science and, of course, mathematics itself. It also seems quite natural that the brewery opened its doors in July 2015 inside a former flower shop, and sports some urban beehives in the back lot (the honey will be used in future brews, we were told.) 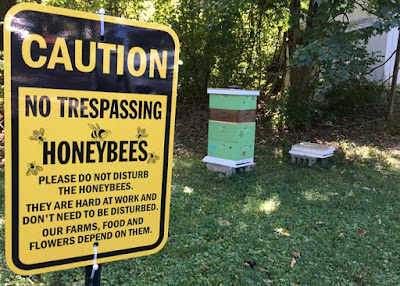 Throw in the owners' penchant for recycling materials, and you end up with a very cozy taproom dominated in white, with a unique mishmash of plants (real and artistically rendered, like the hop-like lamp coverings) and furnishings that range from schoolhouse chairs to tables manufactured from the flower shop's old shelves. Taken as a whole, Fibonacci's space struck us as a nice, very low-key spot to hang out and enjoy a few brews, or perhaps engage in a board game or two (and yes, there was no surprise that we found a math-related game mixed in with the more typical selections.) 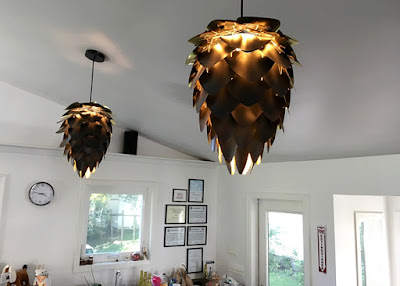 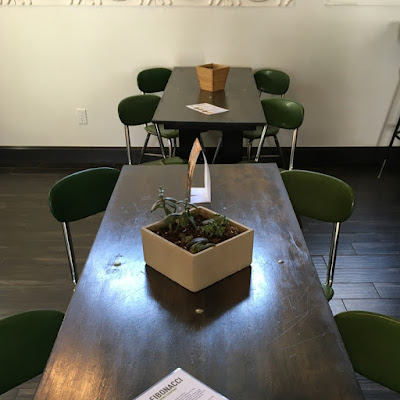 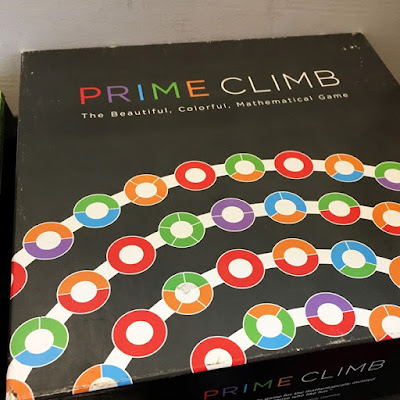 Unlike quite a few breweries we've been to lately where the beer has been uniformly solid to good all around, we found Fibonacci's brews (the flights come in, what else, Pyrex beakers) to be more spread out across the proverbial bell curve. We weren't really fans of their Belgian IPA or Tripel, but thought the Galacto Brute! (a delicous Imperial Nut Brown Ale with lactose that might have been our favorite brew this trip) was pretty spectacular, and the chocolaty Tollhouse Stout wasn't too far behind. 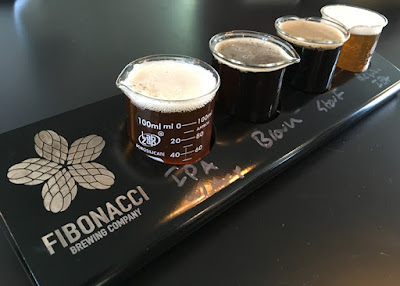 From here, we wandered into the Queen City itself and stopped for brews and dinner at the Christian Moerlein Lager House next to the banks of the Ohio River. 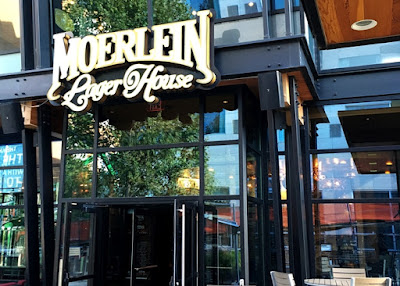 The current form of Christian Moerlein has had a long journey from its birth in 1853 as a new brewery in the Over-The-Rhine neighborhood to its current existence; in some ways, it mirrors the rise and fall (and rebirth) of Columbus' Louis Hoster Brewing. Both breweries reached top 10 production status at their peak production until Prohibition killed off both entities in their original form. Afterward, both brands saw a rebirth in the latter decades of the 20th century, with Moerlein being rebirthed in 1981 by Hudepohl Brewing as their "better beer"product line (something of a precursor to the current Ohio craft beer revival.)

While Hoster's rebirth has been a bit of a roller coaster (the current iteration is attempting to gain wider distribution of the brewery's historic Gold Top Lager), Moerlein has seen a steady rise in prominence. After the sale of Hudepohl and all associated brands to out-of-town investors in 1999, Cincinnati resident Greg Hardman bought those as well roughly five-dozen other Cincinnati-brewed brands back through the mid-2000s as a way to re-establish the city's brewing heritage. 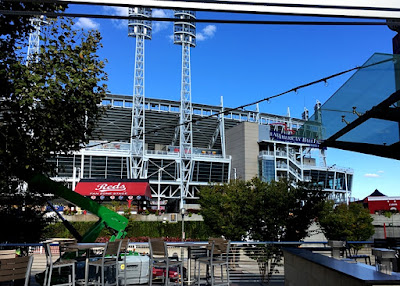 The Lager House, opened up February 2012 and located conveniently near Cincinnati's two major sports venues (The Great American Ballpark and Paul Brown Stadium), is perhaps the most prominent example of the Moerlein's successful rebirth. A multi-storied affair, this complex features a large space (accommodating 1,400 people combined in their restaurant space and beer gardens combined), on-site brewing (up to 5,000 barrels of capacity) and a gorgeous view of across the Ohio River into Kentucky, which one can get a gander of as you reach the top of the flight of stairs to the second floor. 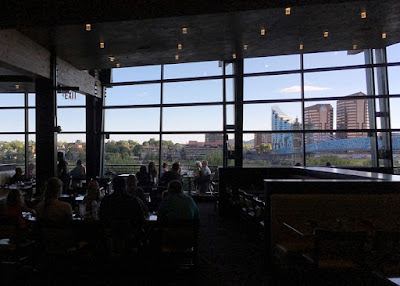 While my spouse and I have been here before before a Reds game (yes, it can get crazy busy during game days, so keep that in mind), it was nice to have a more relaxed experience on this go-around with family members in tow. Outdoor seating was not a problem, as we got some prime seats overlooking the river without any wait whatsoever. 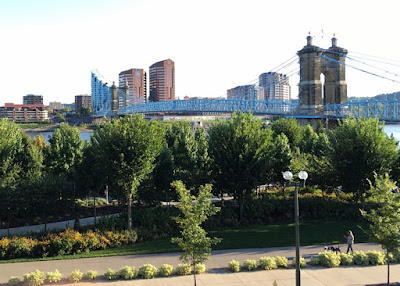 Not surprisingly, The Lager House features an upscale brewpub-styled menu with everything you might expect in the way of burgers, sandwiches, entrees, and so forth, paired up with a collection of Moerlein's core, seasonal and so-called "exclusive" brews. Our mutual, multiple experiences here have been favorable: solidly prepared food with classically brewed beers in a showpiece-styled eatery with a pretty view puts this eatery on the radar anytime we're in the area. And on this day, this proved to be the case as well, a relaxing dinner with a pretty view and a brew or two. 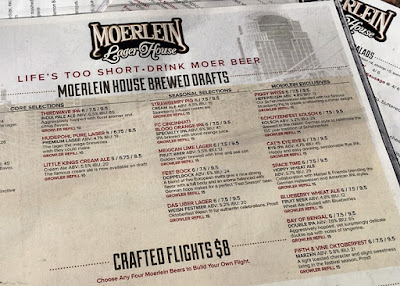 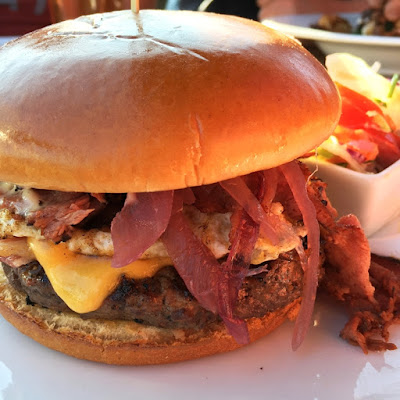 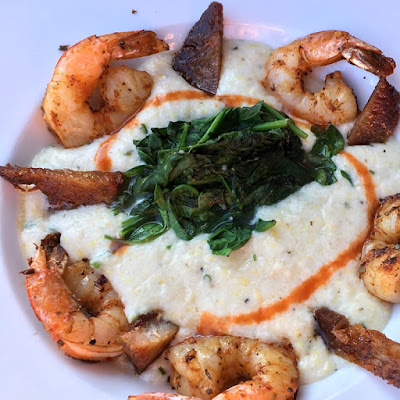 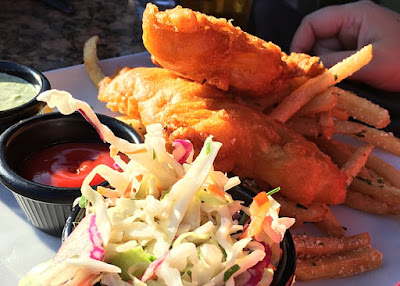