The San Antonio Stroll (Pt. 2): Serenity from the West Side

Lips so sweet and tender,
Like petals fallin apart,
Speak once again of my love, my own
Broken song,
Empty words I know
Still live in my heart all alone,
For that moonlit pass by the Alamo,
And rose, my rose of San Antone!
Bob Wills - “San Antonio Rose”

“So how are you doing, sir?”  His voice was warm and welcoming, and his hand extended slowly across the counter.  I offered a brief hesitation, but I responded with what came naturally. Our handshake was firm and friendly, as if we had known each other for decades.

Granted, this was not my first handshake from a restaurant representative: a visit to the Short North’s Philco Diner gave me that pleasure after I had had a meal there. However, this was the first time I could ever recall being greeted with such before I even placed an order.

“Doing well, how about you?” He brushed his hand through his pulled-back, gray-streaked hair and leaned back on his seat. “Oh, I’m fine. I’d be better if my hammertoe wasn’t acting up.”

This would not be your typical Sunday morning visit for coffee for certain. 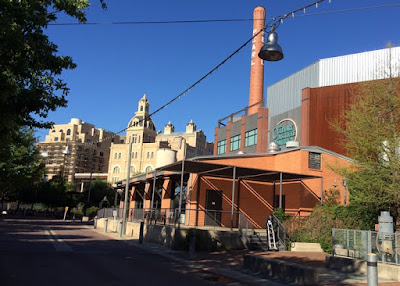 The previous morning's activities had started in a far less formal but no less interesting way. Our trip to San Antonio’s Pearl District, centered around the historic Pearl Brewery facility, turned out to be a wonderfully delightful way to start our day. While the early morning mid-50 temperatures caused the natives of San Antonio to bundle up, for us native/adapted northerners like us, this was more than enough excuse to break out the shorts.

For Central Ohio natives, the Pearl District is essentially what might have happened had the buildings that made up the historic breweries in Columbus’ Brewery District were given the a bit of the Easton Town Center treatment, but keeping the existing historic building vibe and structures more or less intact. Remnants of old brewing equipment, re-purposed as artwork, lie scattered throughout the area in numerous nooks and crannies, adding an industrial flair to the more fancy and touched up architectural flourishes in the area's buildings. 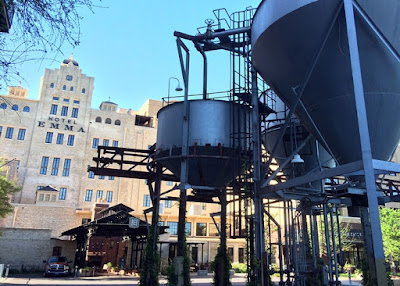 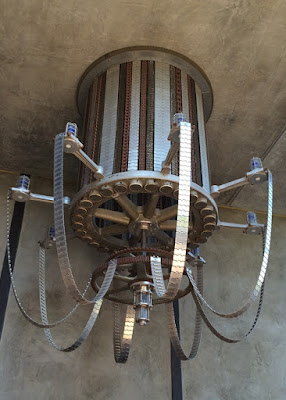 Select financial, creativity-oriented and other business offices are mixed in with retail shops and a blend of culinary destinations (including a branch of the Culinary Institute of America) to make the area a multi-purpose destination throughout the week. Existing structures continued to be re-purposed and expanded, such as the Hotel Emma, a boutique hotel/restaurant space built from The Pearl Brewery’s old brewhouse space to add even a higher level of attraction. 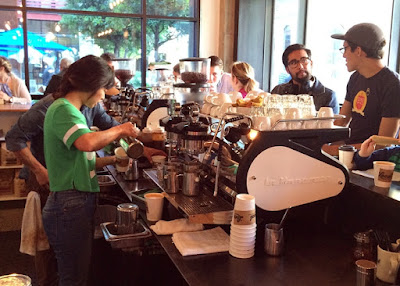 We started with a solidly brewed coffee concoctions from San Antonio’s Local Coffee, whose vibe definitely mirrors Columbus java destinations like the German Village edition of Stauf’s and the Short North's One Line Coffee. If you're a fan of the coffee at these places, Local Coffee's brews will fit the bill for you quite nicely.

We then headed for what was our real goal this morning in the Pearl District’s Saturday Farmers Market.  The itch for outdoor farmers market season here in Ohio had been growing more noticeable as March progressed, and the Pearl’s version (with a lot more vendors than the website would lead you to believe) provided enough of a scratch to get us to that anticipated opening day (in fact, this weekend finds us with the opening of Clintonville's outdoor market.) 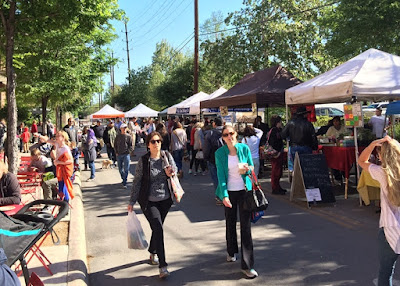 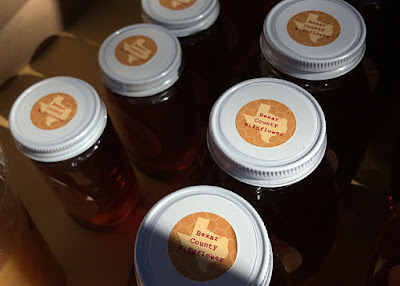 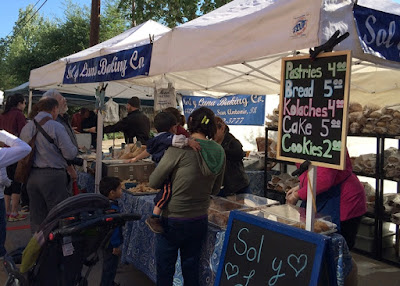 We picked up some fairly unique items, including a unique sweet whey cajeta spread and a hard cheese from Schertz’s River Whey Creamery, almond olive(!) brittle from Sandy Oaks Olive Orchard in Elmendorf, and Atascosa County Wildflower Honey from Holdman Honey based in Seguin, TX.  And we definitely cannot forget our Chilean-themed breakfast with a couple offerings from the Yapa Empanadas (we found out the lovely couple manning the booth have Columbus-area relatives.) 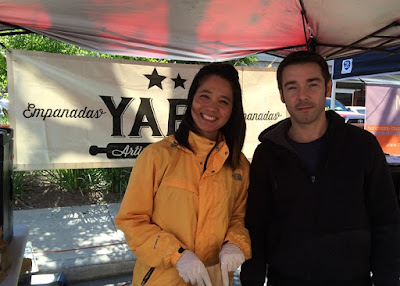 Conveniently traversing next to the Pearl District, San Antonio’s famed Riverwalk is within easy strolling distance, and it’s not hard to find this extended pathway along the river an oasis from the surrounding concrete-coated prairie land. 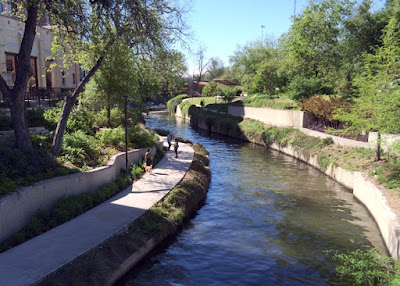 From the natural (pathways lined with hundreds of colorful, blooming flowers to turtles sunning on a the rocks) to the artistically audacious (Carlos Cortez’s “The Grotto” surrealistic cave-like construct, or Donald Lipski’s “F.I.S.H.”, which strings LED-equipped sunfish sculpture underneath a freeway underpass, to the practical (numerous locals using the pathways to get their exercise in for the day), there is much to find along the winding path the Riverwalk wends through the downtown area. 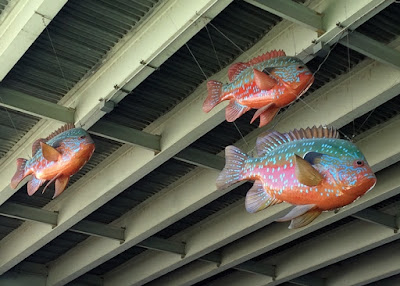 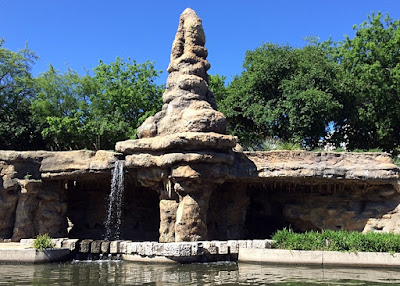 The nice thing is that we just barely scratched the surface of what the Riverwalk offers, as it extended far beyond out travels on this day. For the city's visitors, this attraction provides a blend of beauty and functionality (improved flood-control measures have been incorporated throughout the years) that other cities can emulate and learn from. 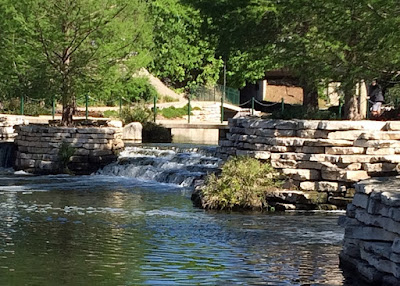 And now, back to the handshake.

San Antonio’s Third World/University Park area, planted firmly in the city's "El Westside" area, isn't too much unlike some of Columbus’ own West Side neighborhoods or Oakland, California’s Fruitvale district, and don’t draw much in the way of tourism traffic. What does draw people into these working-class neighborhoods like these. more often than not lie in the culinary world. For this part of San Antonio, St. Mary’s University, the oldest and largest Catholic university in Texas, also provides an educational anchor and draw for those outside the metro. 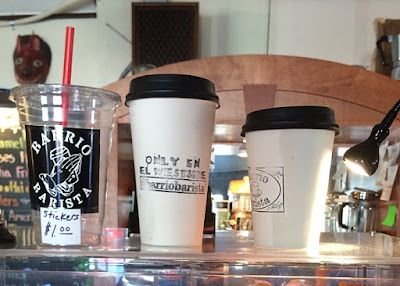 Student populations and lots of caffeination for late-night or all-night study sessions go pretty much hand-in-hand, so maybe it’s not surprising that the Barrio Barista thrives as it does. I get the impression though that a lot of its success lies in the man who just shook my hand this Sunday morning.

Even with his case of hammertoe, cafe owner Gilbert de Hoyos exudes serenity, somewhat surprising when you consider his former stress-laden profession as pharmaceutical rep. Perhaps this serenity helped him weather the tougher times in his former trade, but there eventually that stress takes its toll. Thus, de Hoyos left his job to return to the neighborhood he and his family grew up in, with the goal of restoring his family’s property and building on his father’s legacy in serving the area around him. 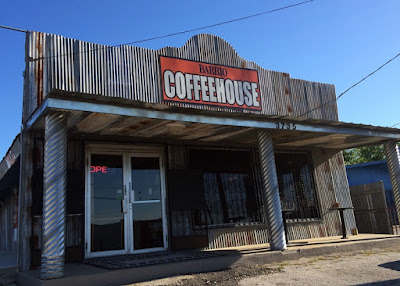 The plain-spoken exterior of Barrio Barista’s building gives no hint to what lies inside: cases of curios, wall booths with TV screens, colorful artwork, church pews and what is essentially an old bar area provides the visitor a lot to look at while you’re waiting for your order. By the way, much of the artwork and curios inside are for also available for purchase. Like de Hoyos, the atmosphere is relaxed and not meant to be fussy, a boon to students and other regulars looking to hang and chill out, or to put in some good study hours. 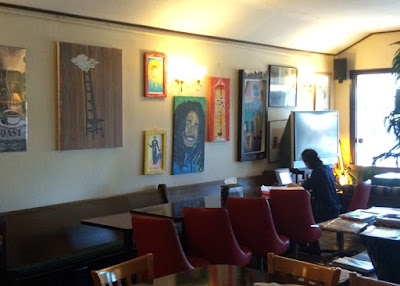 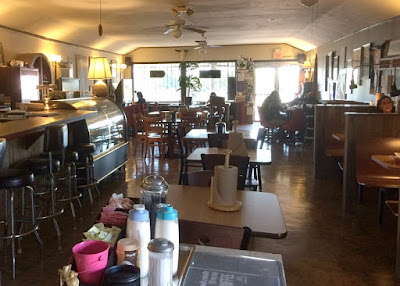 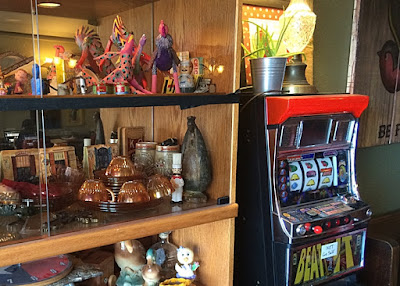 The service was slower than normal (a result of de Hoyos' relative immobility) but the combination of old-school jazz music wafting softly on the cafe’s sound-system and the easy-going chatter I had going with de Hoyos made me wish I could stay and some of their food, such as their specialty barbacoa grilled cheese sandwich. Alas, we had a meetup with friends in less than a couple hours for brunch and beyond, so the stay would have to be short.

As I awaited my coffee order, de Hoyos and I continued our chat. Just before my drink order (two of their special (and quite delicious) Iced Horchata Lattes), he remarked that he sometimes he wished he had all the life's answers.

I thought for a bit and responded. "Well, if you did have all those answers, that probably means you had all the life's problems as well, which may not be such a great thing."

He smiled a bit and gave me a nod just before I the drinks arrived and I took my leave. Despite this relatively brief stay here, my visit to the Barrio Barista rates as one of my favorite ones ever. 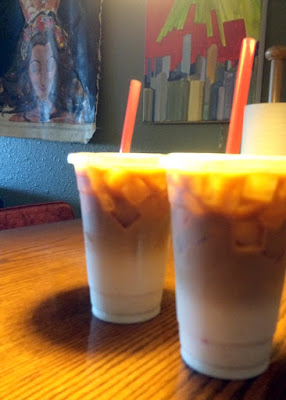