Brews Cruising (Pt. 2): Bats to the Left of Me, Jesters to the Right

I left Austin, TX with a severe case of tunnel vision.

Perhaps if I knew about the November 2015 Culturemap Austin's article naming I-35 through downtown as having the absolute worst traffic in Texas, I wouldn't have made the mistake of staying on the freeway as I reached the outskirts of Texas' capital city. This sludge-like trek through city limits reminded me of the first time I drove through Los Angeles in the late 1980s. Crawling along on city streets around 2 PM, I spotted an empty on ramp for the I-10 freeway overhead, thinking that this was a great idea since it was nowhere near rush hour. Little did I realize that almost every hour on L.A. freeways is like rush hour, and one mile and 20+ minutes later, I escaped the sludge and happily settled for the crawl.

The L.A.-style traffic and other circumstances meant there would be little exploring of Austin's treasures this day. But the traffic meant that the one stop I would be able to make would be the perfect cure, and it lay on the outskirts of town down a bumpy service road in the surrounding Hill Country. 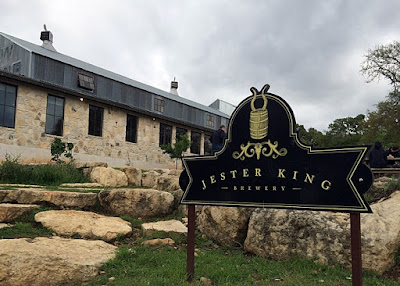 Specializing in farmhouse-style ales, the 2010-founded Jester King Brewery resides not surprisingly in a farmhouse-style estate (formerly an old machine shop) smack dab in the middle of Hill Country. Its rustic, multi-acre setting among the Texas hills easily puts it second on the list of the most beautiful brewery sites I have ever had the opportunity to visit. 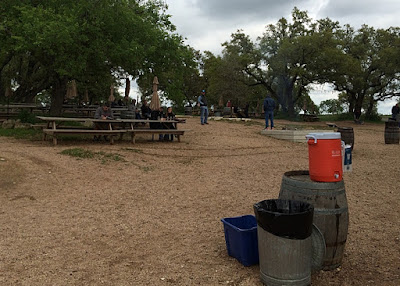 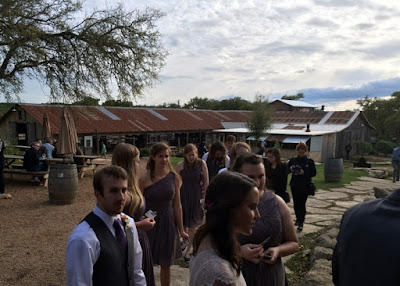 Helping out in the rustic feel is the presence of Stanley's Farmhouse Pizza, located in a barn like structure adjacent to brewery property. Sporting its own seating and alcohol options separate from Jester King, its handmade artisan-style pizzas and sides (such as their quite tasty garlic knots, which I happily gobbled down) are a perfect complement for Jester King's brews. 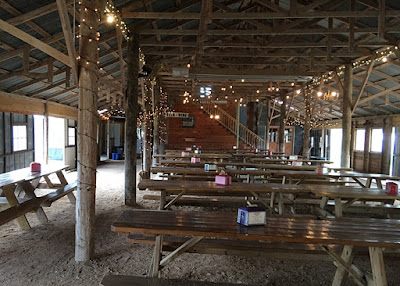 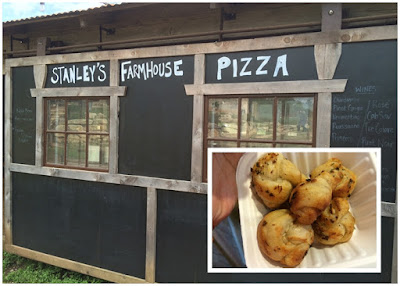 Jester King's philosophy is a unique one in the brewing world, as they relay on the native wild yeasts and bacteria in combination with their local terroir and other usual beer ingredients like hops and water to create beers that really can't be duplicated anywhere else. Brewery co-founder Ron Extract explained this somewhat esoteric process during one of the brewery tours given during my visit. Extract admitted that while nature does occasionally deal them an unusable batch of brew, and that while they could gain more consistent beers with more controls, that would essentially take away what gives Jester King and its brews their unique niche in the craft beer world. 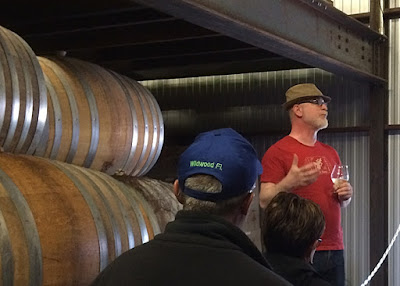 After all that, there's really nothing left to consider but the beer itself. I admit I haven't been taken with some of the more subtle offerings of Jester King (most notably Le Petit Prince, their highly sessionable farmhouse ale), but their more strongly tart and funky offerings have been uniquely satisfying to me. On this visit, the Mad Meg Farmhouse Provision Ale and the Ol' Oi Barrel-Aged Sour Brown Ale were brews that really fit the bill in this regard.

As I was getting close to leaving, I took a glance at my beer in hand against the glorious mottled sky and thought briefly that there wasn't a place I'd rather be at the time. But then I remembered my best friend in the world was on her way to meet me at the time, and as a certain famous Hill Country native once sang, I knew I couldn't wait to get back on the road again. 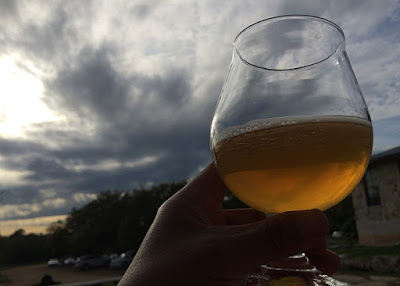 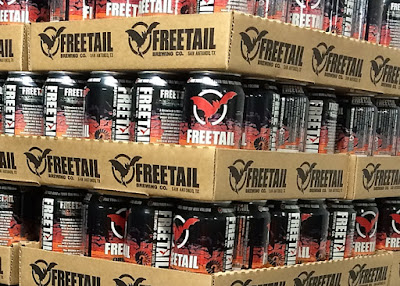 During my earlier visit on my Texas excursion to Lone Star Beverages in Carrollton, I asked the staff what breweries might be worth a visit when we were in the San Antonio area.

The staff all nodded in agreement. "Freetail Brewing. They're kind of like the OG (Original Gangster) of Texas craft brewers," one of them said.

Hmmm...that was recommendation enough for me.

Reading Freetail Brewing's saga to become a brewpub from various media sources provided more education for this transplanted Midwesterner about Texas beer law. The short version of the saga goes something like this: homebrewer (in this case, founder Scott Metzger) knows the local beer market is massively under-served and vows to make a dent in that deficiency. He eventually opens a brewpub whose beers eventually garner a nice following,

However, the next step (distribution of said beer offsite) was basically illegal under Texas law. In a case of David vs. Goliath (in this case, the state beer wholesaler lobby), Metzger's quest to make that legal appeared hopeless at first, but four years of persistence, fueled by many hours at the capital, an increasing rally of support from craft beer counterparts, a hired gun lobbyist, and a (unexpectedly) sympathetic beer distributor made Metzger's next step a reality in 2013. 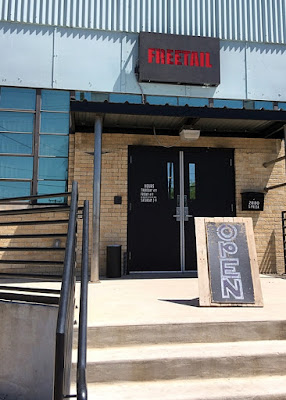 As with the Dallas-area breweries I visited, there wasn't much to recommend the building where Freetail Brewing's brewpub is located: a big Freetail Brewing sign, complete with bat logo (Bracken Cave near San Antonio contains the largest concentration of Mexican Free-Tailed Bats in the world) is painted on the broad side of the building but is only vaguely visible from the main access road. Once again, the visual magic lay in the inside, with gorgeous, brightly colored signs and murals bracketed with racks of barrels and picnic benches laden with messages from previous visitors. The casual vibe definitely fits Freetail Brewing's slogan of "Domestic Beer, Undomesticated." 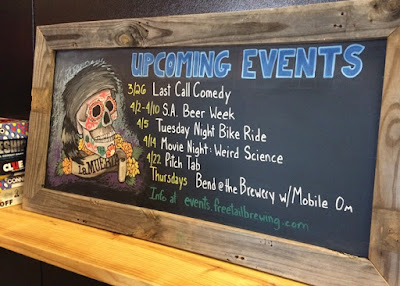 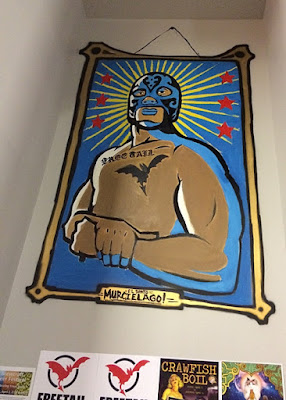 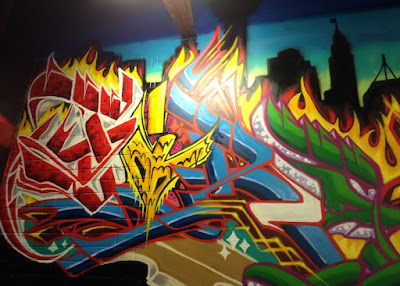 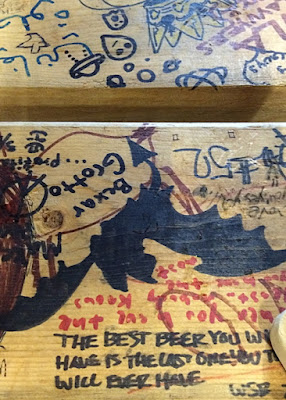 We always like to give props to folks who can brew the heck out of styles that aren't necessarily our favorites, and Freetail wowed us with their original amber ale. This would be a candidate for our mythical refigerator of everyday beer. Other similar basic styles like their Texicali Nut Brown Ale and Rye Wit were also very enjoyable, but lest you think they're only good at the basics, their 2015 coffee stout collaboration with San Antonio's Local Coffee was also a favorite. 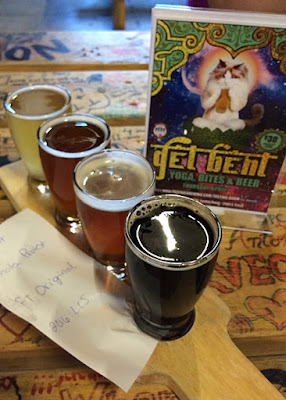 Never to pass up an opportunity for a brewery tour, we joined Freetail employee Coop as the only participants on that day's early tour. As it turned out, the low-stress environment was perfect for this first-time tour-giver, who had moved into the brewing side of operations after a couple years with Freetail, and Coop gave us a very enjoyable and informative tour of the Freetail production area. 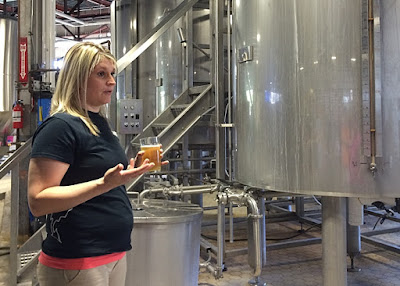 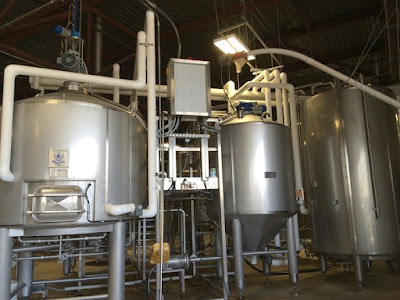 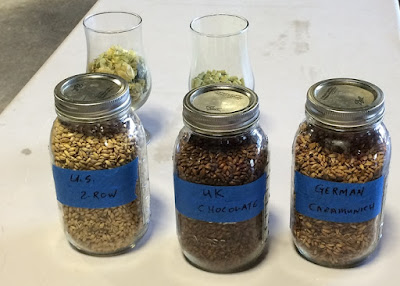 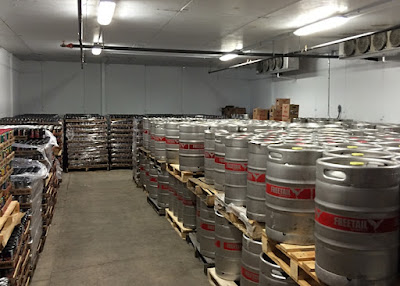 At the ended the tour, Coop offered us a beer on the house, which we were more than happy to accept. Coupled with their other brews we were able to purchase on-site (including a bomber of their uniquely tasty Nocturnal Nectar Belgian-style beer; a portion of proceeds from the beer's sale go toward bat conservation), our stopover for a mid-afternoon couple of hours with the OG of Texas craft beer was just about perfect.