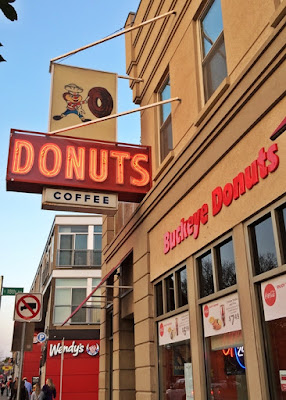 Yes, many long time area businesses have either closed outright, are due to close, or been forced to move to other parts of the city. Still, some of that corridor's rougher-edged character still persists, with perhaps none more visible than Buckeye Donuts, which continues to crank out its donuts 24 hours a day, 7 days a week amidst the hubbub. 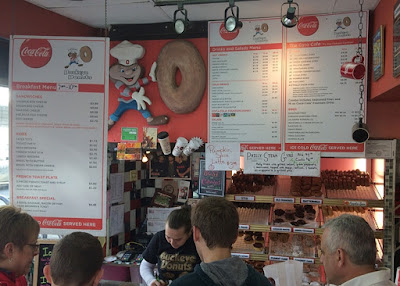 By now, the history of Buckeye Donuts has been oft told.  A true immigrant story, the Barouxis Family emigrated from their native Greece in the 1960s and soon opened up their donut shop, originally under the Jolly Pirate banner.  Business ownership now resides with Jimmy, who took over the shop from his father and grandfather before him.

Even now, the interior still looks like it hasn't aged too much, with a smattering of media (including an old-school Star Wars poster) plasters the wall around a mini-diner space. No matter when you visit, there seems to be at least one regular, and lines out the door of varying lengths are a fairly common sight.

If you're lucky, you may find yourself mingling with the famous (as explained on their website, folks from OSU Coach Woody Hayes to poet Allen Ginsburg to His Royal Badness himself Prince, have paid visits to this humble shop. If you're real lucky, you may have a spot on one of Columbus Food Adventures food tours which takes you into the kitchen for some real life donut glazing. 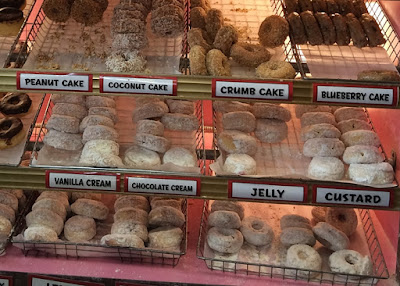 With the anti-carb craze near the end of the 20th century taking a toll on business, the shop bolstered its economic fortunes by expanding their menus to include gyros, a natural fit for these Greek owners.  Later, the shop brought those choices to their own fleet of food trucks, cashing in on the expanding popularity of the local food truck and expanding their reach across the metro. 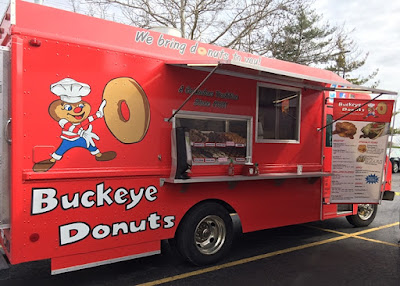 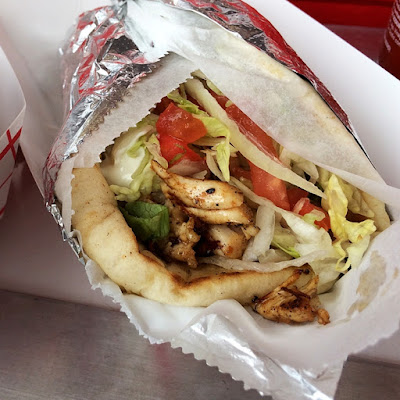 For us, Buckeye Donuts is a regular part of our lives, and I'm a little surprised I haven't tossed out a specific blog post about them yet. My spouse has access to their donuts on a fairly routine basis (no, I'm not jealous) due to her work place's proximity to the shop, and they've become a fun Thanksgiving Day morning breakfast tradition for us on a day when not much else noteworthy is open early.

Even more so, Buckeye Donuts represents something a lot larger in our minds. And it's not really the donuts themselves, as tasty as they are. One could objectively say they do not make the most gourmet donut, nor do they make the most elaborate ones. Compared to other donut makers, one could also say that their finished donuts lag behind others in that nebulous "Instagrammability" category.

Even if you only considered the old-school donut makers (Buckeye Donuts most certainly falls in this category), you can get a pretty ferocious argument from fans of Schneider's, Honey Dip, DK Diner, Golden, and other similar shops in the area about whose donut is best. 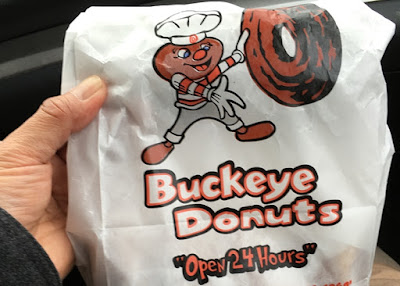 But I would argue that Buckeye Donuts is certainly the most iconic donut in the metro area, especially in light of the area's rapid changes and development.  While Campus Partners "disagrees that North High will include a majority of chain franchises", as reported by WOSU, it sure objectively looks like things leaning in this direction, and the continued existence of this shop into the near future and beyond may be the most telling statement of all.

Barouxis himself stated in the previously linked article that he is intent on staying no matter what. Not that we needed excuses to grab their donuts anyway, but if accumulating a few extra pounds around our waistlines from the conspicuous consumption of his shop's sweet yeasty rings, breakfast sandwiches, and gyros will help keep them in their current digs, we're all for it.

And hopefully, many, many others will be all for it as well.