We had a big introduction to the Butler County Donut Trail back in June (if you'd like to read up on our adventures, click on this link to our blogpost), and truth be told we probably ingested enough sugar and carbs to last through the rest of the year.  But our passports are still short a few places, and it wasn't too much of a detour to venture into Middletown to sample some more sweet treats. 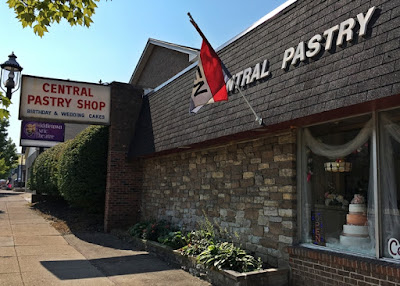 Both of Middletown's donut purveyors fall squarely into the old-school.  The senior of the two, Central Pastry Shop, which started operations in 1949, reminds me a bit of Columbus's Resch's Bakery - a low-frills business with pastry offerings that go beyond donuts. 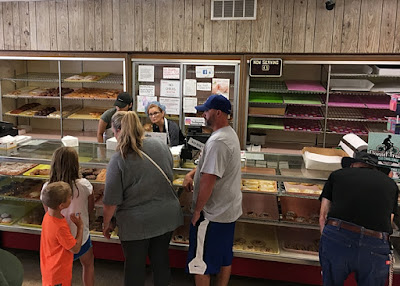 We went with the shop's signature items in their Uglies and Cinnamon Squares, and they are perfect complements for each other. The Cinnamon Squares are essentially a hole-less donut, with a light, airy inside and just the right amount of sweet to balance out the prominent cinnamon presence. Meanwhile, the Uglies, a gob of yellow cake fried up and then glazed like crazy, are plain decadent, sporting a nice chewy interior and a crispy exterior. They were the perfect creation to actually survive an (accidental) full day and night stay in our car and come out basically no worse for wear. 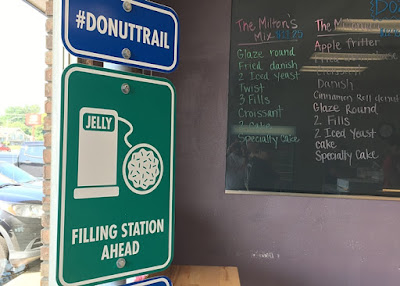 Meanwhile, Milton's Donuts is 11 years the junior of its Middletown-based trail member, but is no less old-school. As with Central Pastry Shop, the Butler County Donut Trail sign was present in all its clever glory. 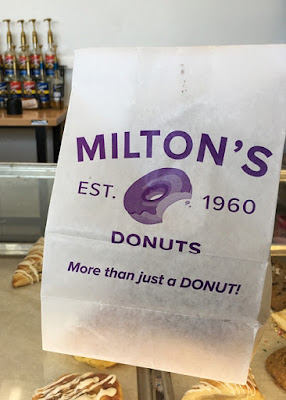 These two shops may have the coolest donut bags we have encountered in a back-to-back visit. Also, Milton's takes the lead in terms of favorite treat of the Donut Trail so far.  As good as Central Pastry's treats were, Milton's Peanut Butter Cream Donut, with crumbled peanut butter cup candies on top and delicate peanut butter cream (all of their cream fillings are made from scratch) inside made us pause and exchange "ooh, this is really good" looks.

We had meant to continue onto Cincinnati at this point, but those rich donuts made us realize we really needed a cup of coffee.  After a quick search, we veered off the freeway and made a beeline to Mason, the home of Cocoon Coffee. 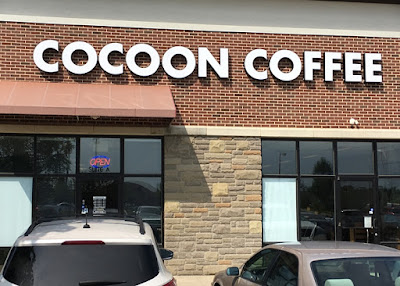 We were primarily interested in the coffee, and Cocoon didn't disappoint there (the use of Stumptown Coffee Roasters beans certainly helped.) However, we did note a couple of interesting things at this cafe. For one, it is very well geared to those who need to work with several specially setup workstations. And although we were sweet-treated out by the time we got here, we did notice a variety of tempting-looking pastries, many catering to modern day dietary trends such as Paleo, soy-free and sugar-free. 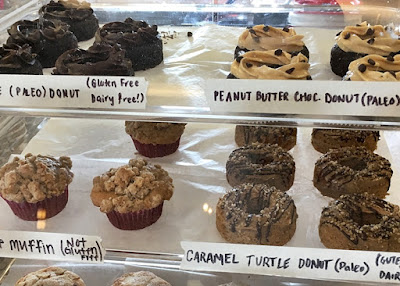 Going with the flow, we decided to wander around Mason for a little bit. Feeding into my spouse's yarn addiction, we drove into the downtown area to drop by Main Street Yarns. 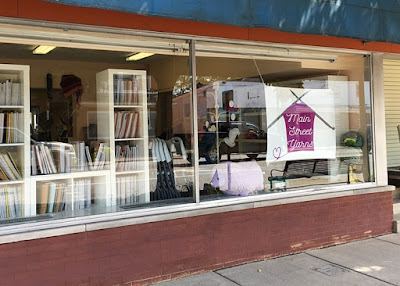 For my spouse, Main Street Yarns ranked as a solid shop with a friendly owner (an ex-pat from the UK) and a good selection of yarn brands and other necessities. Unsurprisingly, there was a big presence of cute representations of the usual fiber-producing animals; I personally also appreciated the nibbles of humor that were scattered throughout the store interior. 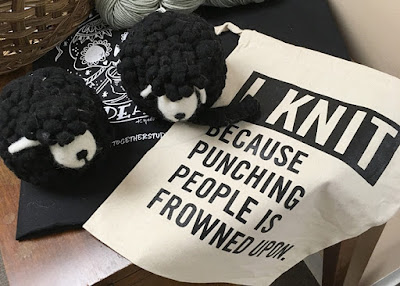 By the time my spouse had acquired her yarn store goods, we were ready for lunch. For that, our stop at the coffee shop prior came in handy, as we noticed a customer wearing a T-shirt for a local pizzeria with a catchy logo. A quick search on the mobile phone led us to the combined space that is 16 Lots Brewing Company and Mad Monks Pizzeria. 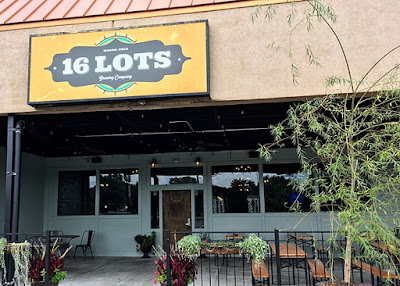 The brewery name is a nod to the city's history, where Revolutionary War veteran William Mason bought the land that would become the first 16 lots of property in what became the city's downtown. The brewery, Mason's first such venture, was opened to the public September of 2017. 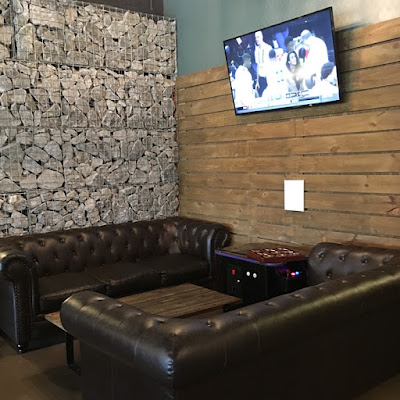 The appealing mural of William Mason hoisting a beer outside is met with more appeal inside, with a roomy interior accented with both rustic and industrial elements, plenty of seating, a cushy looking couch set in one corner, and a dart board area in another section. Overhead, windmill-styled fans add in a nice whimsical touch. 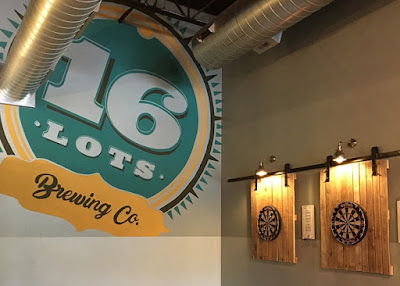 Our overall food/beer experience at 16 Lots/Mad Monks reminded us a bit of Granville's Three Tigers Brewing prior to their change in head brewers last year: the food would occasionally overshadow the beer.  In 16 Lots case, there was nothing wrong with the brews in terms of carbonation and the expected flavors for the styles. 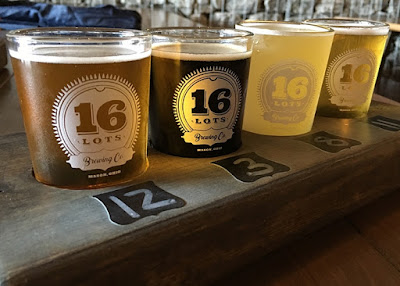 However, we suspect that the water conditioning was just a bit off, as the flavors we got from our brews tended to fade out about three-quarters of the way through. With that said, we are more than willing to give their beers another shot (we've had far worse in terms of watery brews from other breweries we've visited) especially with Mad Monks in the house. 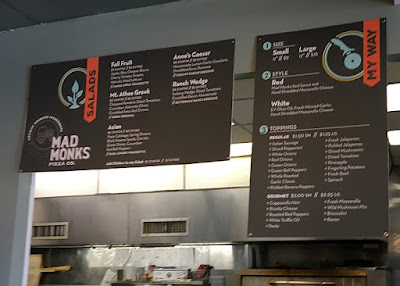 Set close to the entrance, Mad Monks Pizza offers New York-styled pizzas with fresh ingredients: as stated on their website, they proudly state that their kitchen "(doesn't) have a freezer. Never have; never will. Enough said."

Their pizza (for our order, we went with their Divided Sky with pesto and red sauce, Mozzarella and shaved Parmesan cheeses, green onion, truffle oil, and a wild mushroom mix) reminded us a bit of the pies that Harvest Pizzeria in Columbus puts out on a regular basis, with a bubbly, charred border and thin crust in the middle. And like Harvest, this was a very worthy pizza creation: we thought we might have extra slices for later because of our prior donut and coffee consumption, but we scarfed this satisfying pie down pretty quickly. 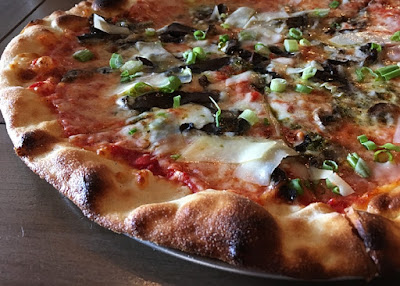