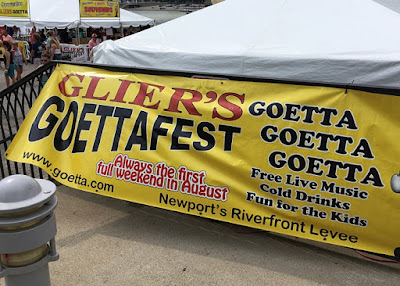 Held across the river in Newport, KY, the Goettafest now draws visitors in the six-figures during its four days of operation and is recognized as one of the area's biggest and premier events.  For those like us who aren't familiar with the origin of goetta or Glier's itself (by far the largest producer of this area staple), there is a tent with informational displays. 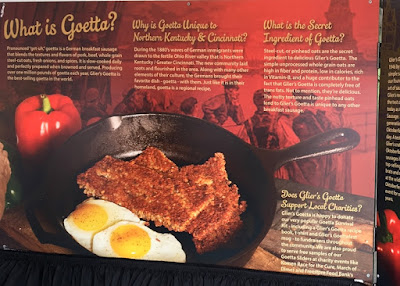 The festival was recognized by Family Circle magazine this year in its "Festival for Every State" list, recognizing events that "reflect local culture and capture the true flavor of a family destination." Indeed, Goettafest had plenty of activities geared to kids, including traditional carnival attractions, event-themed games, and yes, a goetta mascot for kids (or kids-at-heart) to pose with. 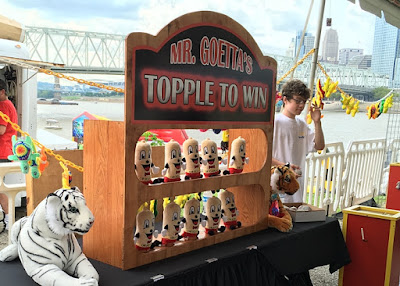 Along with sloppy but energetic cover bands, the world's only goetta vending machine(!), and a picturesque venue (right along the Ohio River), there's of course food vendors serving all sorts of goetta goodness. In a neat twist, organizers make sure there is no duplication of goetta-based offerings and that those offerings are affordable, with no item more than $6. 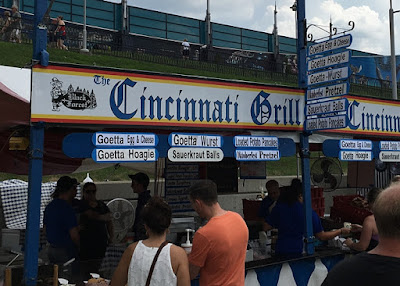 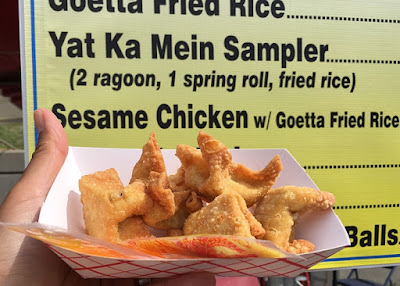 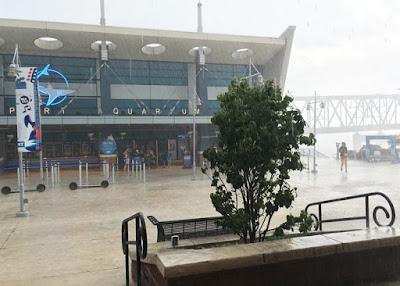 Thankfully we had escaped to higher ground (and under an awning) before the worst of it hit.  But as the torrential waters continued to pour, I could hear the narrator's voice from "A Christmas Story" in my head, in a riff of that famous scene when the Bumpus Hounds get inside Ralphie's house and tear up the Christmas turkey.  Only in this case, it's a big old roll of goetta, and that heavenly aroma of grilled goetta that hung in the air was now gone, all gone! No goetta, no goetta sliders, no goetta tater tots, no goetta fried rice, no goetta tamales, goetta empanadas, or gallons of goetta potato soup! Gone, all gone!

Well, not all gone, if you waited around long enough - the storm cell eventually faded to the east.  However, we had other places to go this day, so after drying ourselves as best we could, we made it back to the other side of the river to sample our first tour with the Cincy Brew Bus. 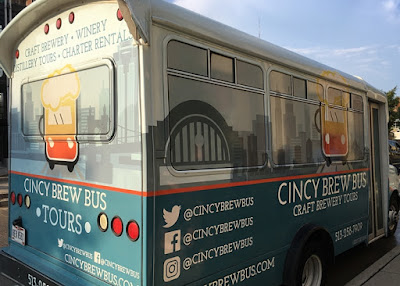 Founded by Mike and Jen Stokes in 2013, the Cincy Brew Bus turned out to be our first chance to delve into another beer-related tour outside of Columbus Brew Adventures, which we have done both as customers and later (for me) as an occasional tour guide. With a wide swath of public and private tours available visiting a variety of distilleries, wineries and breweries throughout the week, and using a number of mechanisms (walking, streetcar, and airport-style shuttle bus) the options are many, but we decided an evening-hour Craft Brewery Tasting Tour would be perfect for us.

All participants on this tour were given a colorful bead necklace from which to hang a pretzel from local bakery Servatii Pastry Shop and Deli around their neck. The pretzel did prove handy to fend off the effects of alcohol as we went along, even drawing an inquiry from a curious bystander during our first stop.  However, we found that more likely than not, you'll want to grab another bite to eat later on during the tour, and thankfully all three of our stops had options available. 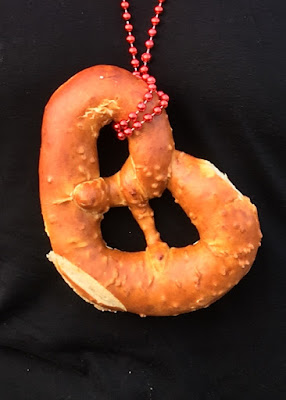 One interesting thing about the Brew Bus is that you're allowed to drink beer while on the bus, as long as it is not one from those dreaded macro-breweries.  My suspicion, which was confirmed by the end of the tour, was that most people shouldn't need the extra lubrication because of the generous pours you get at your stops. In addition, the Brew Bus fine print warns strongly about puking on the bus: riders who experience a "reversal of fortune" inside are subject to a cleanup fee.  As it turned out, no one decided an extra brew on the bus on our tour was worth it either; an impromptu group singalong to Queen's "Bohemian Rhapsody" turned out to be a good substitute.

If you glance at the tour calendar, you'll see that tours rotate among the many breweries servicing the Cincinnati area.  This aspect can lead to a fair amount of the time on the bus, which was the case with our travels from the JACK Casino to Fretboard Brewing in the Hazelwood neighborhood, College Hill's Brink Brewing, and then southward to Taft's Brewporium in Spring Grove Village.  For a Columbus native, the rough travel time equivalent would be starting from the Hollywood Casino and riding over to Clintonville's Lineage Brewing, stopping next at Pickerington's Combustion Brewing, and then finishing up at Loose Rail Brewing in Canal Winchester. Fretboard's obvious parallel in Columbus is Four String Brewing with the music connection; indeed, the taproom was appropriately laid out with a music stage, a guitar-string motif connecting the tap area to the other side of the room, and a fairly diverse crowd in house.  Fretboard also sports a food option with the barbecue-oriented Smoked Out, which opened up in November 2017. 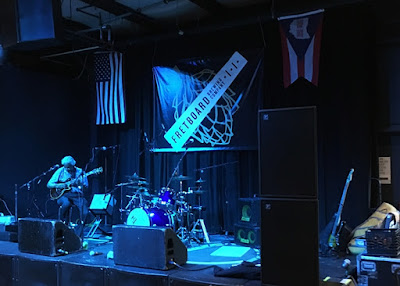 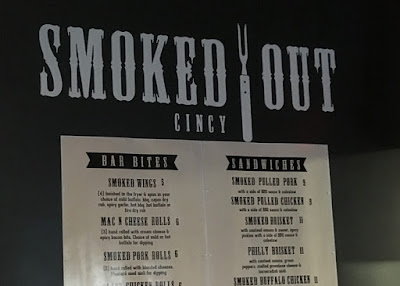 The atmosphere and feel or Brink Brewing reminded us of the forementioned Lineage Brewing, or even North High Brewing, with the liberal use of reclaimed materials to enhance the feel of this mid-1920s era space. A seating area to the back is usually where you'll find their scheduled food truck of the day; food delivery from neighborhood eateries is also available (we spotted a delivery of a pizza during our stay there.) The haul of medals displayed near this brew house's tap handles are just a hint of some of the well-made brews they've been brewing from their seven-barrel system since they opened in early 2017. 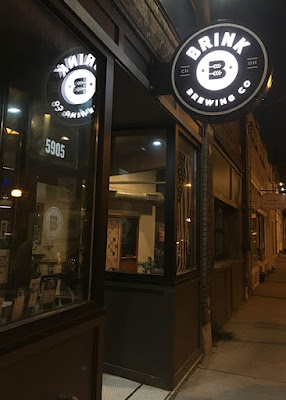 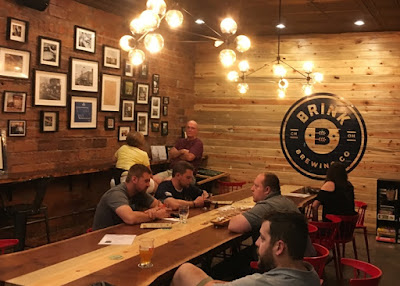 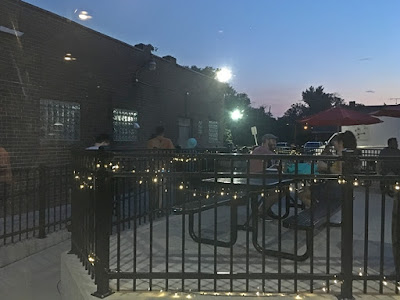 Our final stop for today was Taft's Brewporium, which was named Cincinnati's Best New Restaurant in the 2018 Best of Cincinnati poll.  In this case, the closest match for Taft's fairly substantial expansion that we have been lies in its crosstown neighbor MadTree Brewing, with a large jump in capacity, square footage, as well as an in-house pizza kitchen. 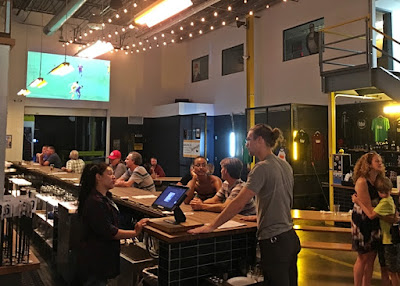 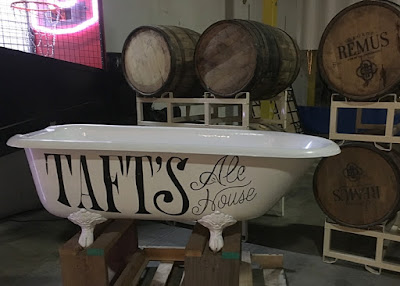 In the pizza kitchen's case, Taft's brings something unique with a New Haven-style apizza, a style not really found in this state. Other pizza options are available (including on this visit, the do-a-double-take I.C.P. (which throws cantaloupe, prosciutto, balsamic, and basil on their Apizza) but we opted for a simpler but rather tasty meatball appetizer plate instead. 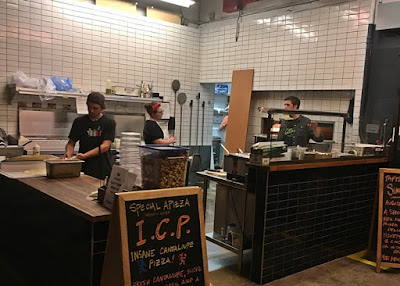 At each stop, we were allowed to generally wander the space as we liked for the first 20-25 minutes or so. Justin, our guide this night, would then come by to refill our taster glasses via pitchers full of the featured brews for a total of three per brewery. Unlike many of Columbus Brew Adventures' tours, where behind-the-scenes brewery looks take place fairly early on and often involve brewery representatives, our tours were both later during our respective stays and entirely guide-led. 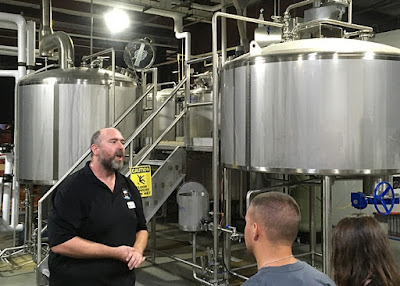 With that said, Justin did a great job of documenting the history behind each brewery and mixing in the mechanics behind the brewing process as well.  Also, the fact that our group was wander through the brewery spaces behind the scenes with only the guide as escort was proof to us of how much area breweries trust the folks who work for the Cincy Brew Bus.