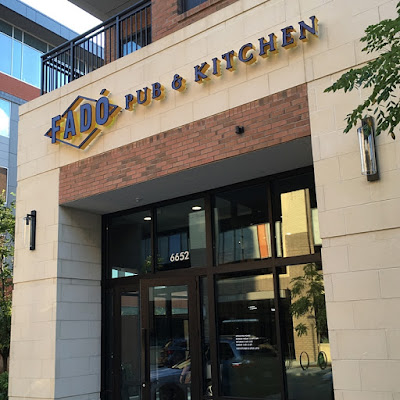 Fadó Pub & Kitchen is essentially a change of focus for the owners of the eatery's eleven Fadó Irish Pub cousins, which are scattered throughout the United States and Abu Dhabi. The traditional Irish pub feel (the restaurant's founders unsurprisingly sport Irish roots) has been transformed into something decidedly more contemporary and a broader focus in their Bridge Park space. Here, prominent light fixtures and industrial ducts above are replaced by brightly colored artwork, plenty of glass and windows at lower levels.  The bar area itself also resembles something you might find in a cocktail lounge, which is no accident: while you can still get a proper pint of Guinness poured for you here, Fadó's focus leans decidedly toward the craft cocktail. 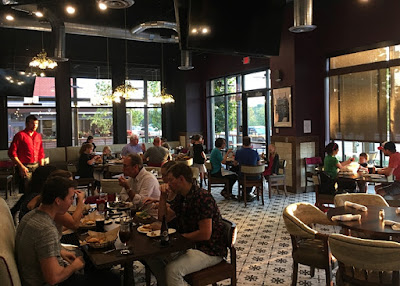 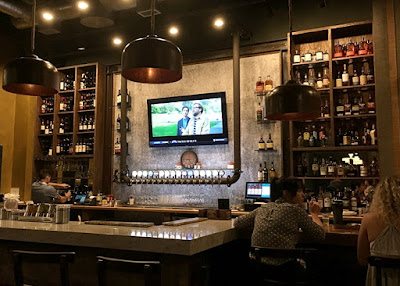 Mirroring that generally open feel, Fadó decided to go with an open kitchen. I always liked sitting in a diner where I can see the orders being pumped out and whisked away by waitstaff to hungry diners, and I imagine that general feeling wouldn't change one bit at this eatery. 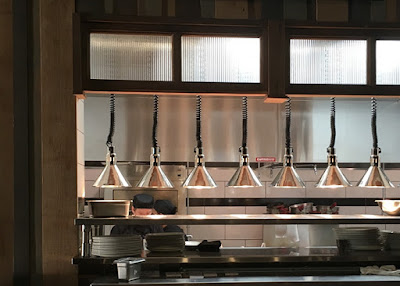 The menu is both more broad and focused at the same time.  A few select items that are found at Fado's Irish Pub menu can be found here, but the palette is expanded for more fine dining European dishes such like Cod Provençal, Steamed Mussels, and The Kitchen Pork Chop. Overall, the menu seems to be sized just right, with enough of everything to satisfy all tastes and moods. 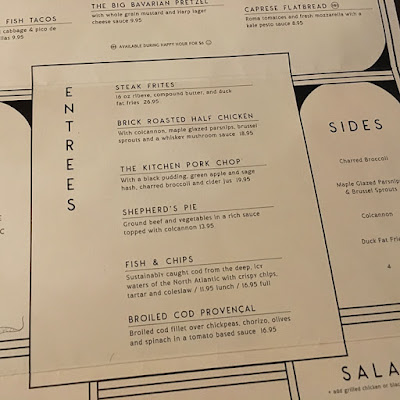 We didn't feel like super-fancy, so we stuck to items that with one exception turned out to be holdovers from the Fadó Irish Pub menu.  It turns out these items were good holdovers: my Avocado RLT (the "R" standing for Rashers, or Irish Bacon) sandwich was a bit of a challenge to keep together, but the flavor combination was a nice twist on the traditional BLT (a side of sauteed Maple Glazed Parsnips and Brussels Sprouts was added in by me in a futile stab at healthfulness.)

The appetizer proved the big winner for both of us - the Fried Goat Cheese appetizer, paired up Jalapeno Infused Honey, is an early candidate for "must order" status on future visits. 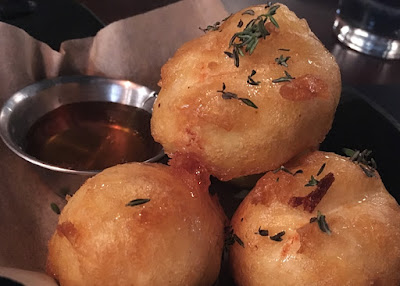 The lone new item to that we sampled on this visit to Fadó was also a big winner - the Lamb Burger was cooked to juicy perfection, with a lovely rosemary and blue cheese spread along with the arugula, tomatoes and pickled onions.  The side of Colcannon was equally as good, with a nice fluffy texture and a good onion and chive flavor. 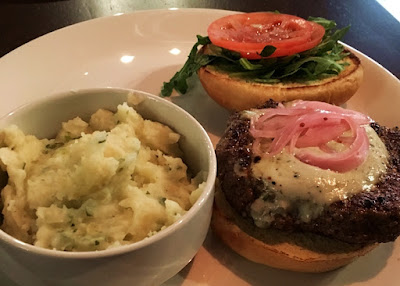 Our dessert was another Fadó Irish Pub holdover in the Harvest Bread Pudding, a perfectly lovely combo of apples, cinnamon, and walnuts topped off with vanilla ice cream, whipped cream & caramel sauce. 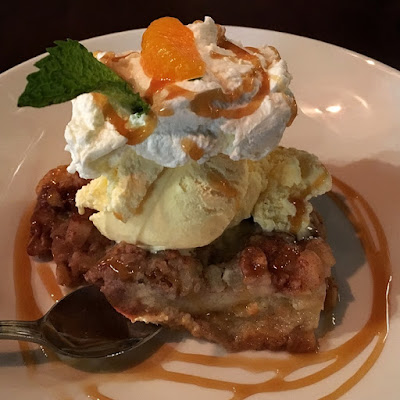 Oh yes, we did want to mention the cocktails: unsurprisingly, Fadó's focus does lean toward Irish Scotch and Whisky, so we figured their Signature Manhattan and Old Fashioned (featuring the restaurant's own Private Label 10 yr Elijah Craig) were good places to start.  Turned out this start was so good, we just stayed there in the case of the Manhattan and ordered a second one. 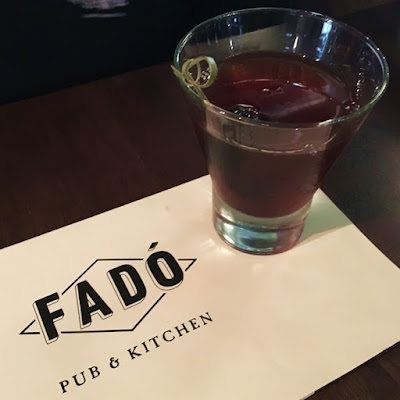 Granted, it's always hard to tell with a place that just opened, but based on my observations, Fadó is off to a good start.  Our waiter had mentioned business was more than they expected, and the diners who were in-house with us seemed diversified between couples out for a nice meal and large families, as well as a few folks who were in to grab a drink or two. We certainly enjoyed ourselves, (dinners out aren't a common experience for us), and are definitely looking forward to another visit, especially when we discovered that the restaurant has brunch service (by far our most favorite meal to get out of the house for.)